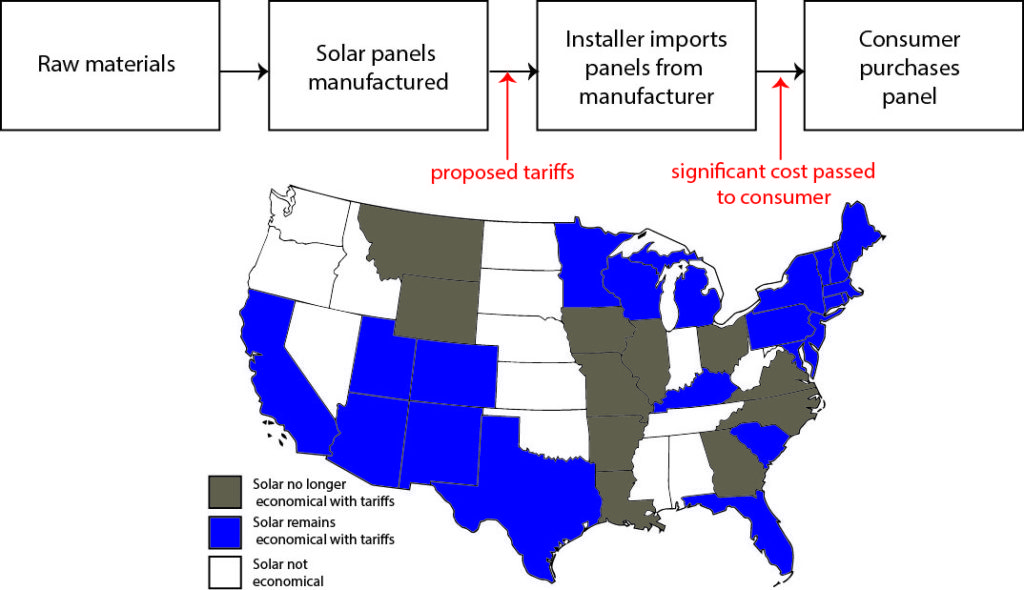 Tariffs on Sunrun’s foreign manufacturers have significant consequences downstream in the supply chain, exacerbated by the highly price-sensitive nature of consumers of residential rooftop solar.5,6 In particular, to avoid compression of its gross profit margins, Sunrun will be compelled to pass its higher import costs along to its customers; this response, however, will make residential solar economically uncompetitive relative to drawing electricity from the grid in several states, should tariffs be instituted at the levels initially proposed.4 In the absence of the value proposition of saving money on utilities through solar adoption, customers overwhelmingly withhold purchasing and installing solar panels. Consequently, Sunrun’s addressable market of solar-viable rooftops in the US, under a protectionist policy regime, could shrink by upwards of 60%.7

Notwithstanding management’s public assertions of confidence in resilience of the business, Sunrun has a plan to mitigate downside risks. In the near term, the company reportedly intends to proactively manage its working capital, stockpiling inventory prior to the anticipated rollout of tariffs to reduce immediate exposure to increased costs.8 In the medium term, Sunrun is aggressively pursuing greater penetration of solar-viable markets while simultaneously publicly advocating to eliminate unfavorable trade policies.3,9 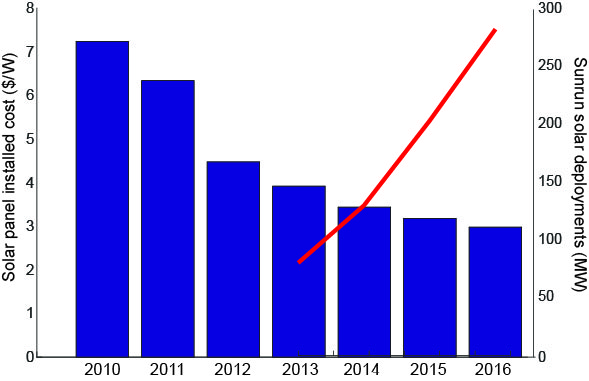 Although Sunrun faces capital costs associated with accumulating inventory, doing so reduces the need to purchase from suppliers later, in the immediate aftermath of a potentially sharp increase in solar panel costs.7,14 Over time as inventory depletes, Sunrun can also expect incremental, organic declines in industrywide solar panel costs due to ongoing technological improvements, consistent with the 14% compound annual decrease from 2010-2016.13 Building inventory upfront, beyond Sunrun’s typical 30- to 90-day stock, enables the company to delay subsequent purchases until the cost of the tariff is likely to be partially offset by lower material and assembly costs.7 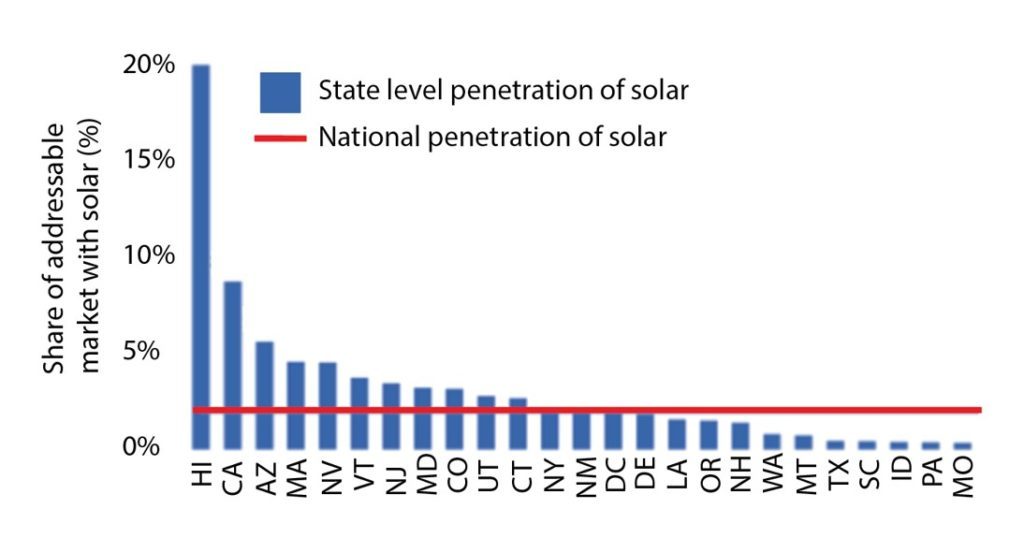 Figure 3: Residential solar is underpenetrated in economically viable US states4

In the face of a potentially shrinking addressable market, Sunrun is concentrating its efforts on claiming a larger share, for example through a recently announced cross-selling and marketing partnership with telecommunications conglomerate Comcast.3 Management’s intention over the next several years is to capitalize on current under-penetration of residential solar, with under two percent of viable homes outfitted with rooftop panels.4 The company also intends to challenge policy hurdles legally, a strategy proven in the early 2000s, when steel tariffs were overturned under two years after being enacted.15,16

Beyond the actions already contemplated by management, Sunrun should position itself to benefit from market dislocation resulting from protectionist policies. Sacrificing gross margin in the short term would facilitate taking market share from competitors, and rebalancing production toward domestic manufacturers from overseas would reduce exposure to policy risk. Over time, Sunrun should pursue opportunistic acquisitions of competitors in distress. 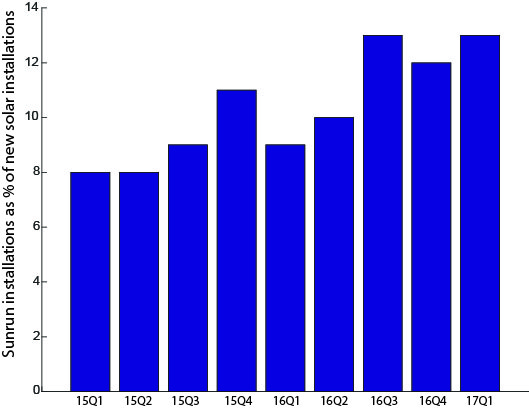 The landscape of solar installers is highly fragmented, and small-scale businesses with weaker balance sheets, less access to cash, and a higher cost of capital may be particularly challenged in the case of significant tariffs. As less resilient competitors retreat, Sunrun has a unique opportunity to acquire more customers through competitive pricing. Management should simultaneously focus on developing US manufacturing partnerships in response to heightened costs of imported panels and the likelihood of continued governmental accommodation of domestic manufacturers; vertically integrating with a manufacturer could also counteract unfavorable trade policy.

The prevalence of small, local installers that could become uncompetitive due to isolationist headwinds creates potential for accretive consolidation. The top three players in residential solar (Sunrun, Solar City, and Vivint Solar) account for approximately one-third of the industry, whereas the “long tail” of the market extends into hundreds of independent solar installers with narrow geographic expertise.7 Sunrun should aggressively expand its geographic footprint by acquiring attractively priced businesses as they come to market.

As the policy debate evolves, it is incumbent upon management to actively evaluate and adapt its approach. Confronted with adverse trade policy, how should Sunrun balance attention on its existing business with opportunistically taking share from distressed competitors? To what extent should it modify internal processes and cut costs? (800 words)

Protecting Livestock and Profits at Tyson

13 thoughts on “Protectionism Threatens to Cripple US Solar: Spotlight on Sunrun”