Since the very beginning of its history, Philips has been a market leader and innovator in the consumer products space. As an early adopter of the “electricity industry” in 1891, Philips’ core product category has always been lighting. After quickly ramping up to being one of the largest producers of light bulbs in Europe in the late 1890s, Philips still dominates the lighting industry to this day with the majority of its revenues (30%) coming from its lighting business. [1][2]

In despite of Philips’ clear dedication, the lighting industry is not typically regarded as exciting. Since 1879, when Thomas Edison first patented the incandescent bulb, there really has only ever been two major technological revolutions in lighting: the introduction of the fluorescent bulb in 1939, driven by an energy shortage, and the invention of the light emitting diode (LED) in 1962, also driven by global energy consumption concerns.[3]

However sluggish the industry, Philips is not in any way short of innovation potential. Throughout the twentieth century, they diversified away from the sleepy lighting industry into consumer products (TV, Radio, CD and Cassette players), medical devices (X-Rays), and even the digital revolution itself (Integrated Circuits and Transistors). The innovation has indeed been slower in lighting, but the company has always been an early adopter of new technologies, driving adoption of the fluorescent bulb and LED soon after their introduction into the market.[4]

The story of Philips isn’t without challenges. As recently as last year, Philips has been facing increasing competitive pressure due to the lower cost and longer lifespan of LEDs, as well as the company’s failure to vertically integrate with a semiconductor business. As a result, Philips Lighting is troubled by falling margins and stagnant growth.[5] Notwithstanding these concerns, Philips has once again remained true to its core principles and relied on innovation to impact the bottom line. In 2012, thanks to the digital revolution, Philips may have had its “iPod moment” without anyone noticing. [6]

That iPod moment is Phillips Hue, a lighting control system designed to provide consumers with full control over their home, all driven by their in-home Wi-Fi network, smartphone, and an easy to use app. Hue represents a major milestone in the world of lighting products, previously restricted to a boring life of low prices and bland marketing. Now part of the Internet of Things (IoT) and home automation revolution, Hue promises to “forever change the way you control and experience light.”[7] The system is packaged as three smart bulbs and the “bridge”- an in-home communication hub that supports connection of up to 50 bulbs.  The Hue is not cheap, however. Priced at a steep $199, the system has entered premium price territory, which further represents the commitment by the company to launch into a completely new market segment for its products.[8]

While a radically new direction for Philips, the research supports that they are once again an early adopter of a budding trend. McKinsey & Company’s report on the global lighting market shows that “the market for lighting system control components is expected to grow very rapidly.”[9] 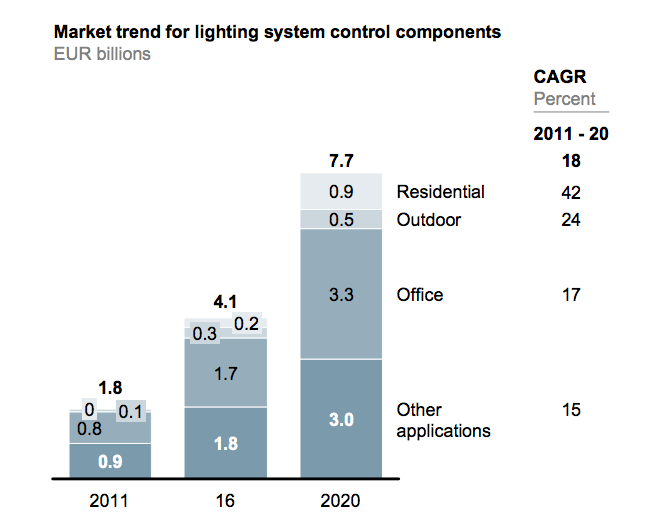 In addition, the report states that, “Residential may be the fastest-growing application, although the market size is currently still small…However, awareness of lighting control in the residential domain is gradually increasing, together with greater consciousness of home energy management systems.”[11] Not only is the residential space growing rapidly, but as seen in Figure 1, the office and outdoor spaces are also growing at a CAGR of 17% and 24% respectively. Fortunately, the draw for systems like Philips Hue is not only the “cool” factor for hip techies, but also the energy saving potential that smart lighting products provide.

The Future for Philips Lighting

In despite of the proliferation of LEDs putting a major strain on the industry as a whole, Philips once again has used its innovation in the digital space to stay a market leader.

To stay ahead of the curve, however, Philips will need to continue to push the ball forward. I think that the best way to do this is twofold. First, continue intense R&D in the residential space, focusing on energy conscious early adopters of IoT technology. Second, invest heavily on the second highest growth sector for home lighting systems, outdoor. As long as Philips never abandons its innovation culture, the 21st century should surely look as bright for the company as the 20th.

A Big Step in Digital Transformation for Electricity: GE and Exelon Seal the Deal