The process of producing electricity by combusting hydrocarbons in steam turbines contributes to increasing atmospheric concentrations of greenhouse gases. 84% of U.S. electricity was generated using fossil fuels in 2016. [2] Electrifying the national supply chain infrastructure would represent a giant step in progressing toward sustainability, but the impact would be moot if the source of that electricity contributed an equivalent amount of carbon dioxide to the atmosphere. Global interest in reducing anthropogenic greenhouse gas emissions stem from their link to an increase in recorded global temperatures, the severity and frequency of extreme weather events, and a plethora of other impacts. [3]

This trend poses a serious threat to NRG given the nature of its portfolio. NRG generates profit by purchasing hydrocarbons, generating power, and distributing electricity among a distributed grid. Several variables represent risks for this supply chain. Specifically, government regulations enacted to discourage hydrocarbon production or encourage alternative power sources threaten NRG’s ability to remain competitive. Limiting the quantity of carbon emissions would require NRG to reduce the quantity of power they supplied or pass costs on to customers. NRG recognizes the risks associated with global weather conditions and political regulations in their annual reports, noting that both are in flux due to climate change. [1] The sensitivity to each of these factors necessitated a strategy with optionality to minimize the risks associated with a business whose lifeblood has historically been sourced from coal and petroleum.

NRG responded to the evolving economic and political climates by gradually converting some of their powerplants to a cleaner, more efficient fuel source. [4] Modifying facilities to process natural gas instead of coal allowed NRG to realize multiple benefits. Augmented plants realize a 40% reduction in carbon dioxide emissions per unit of energy produced, reducing their exposure to carbon emission requirements. [5] NRG recognized a surplus of cheap gas production resulting from the shale revolution, and leveraged the commodity cycle as an opportunity to overhaul a subset of their electricity generators.

In the short term, NRG has diversified its portfolio to include renewable sources of energy. [1] By operating wind and solar power generation facilities, NRG has hedged against the volatility in coal and petroleum prices that result from traditional commodity cycles. This position decreases their sensitivity to greenhouse gas regulations while benefitting from the governmental incentives enabling renewable energy installation and operation. NRG will be able to maintain a pulse on emerging evolutions in wind and solar technologies. This timely insight on industry developments will enable NRG to respond definitively when development of new projects becomes economically viable or strategically relevant.

NRG is also investing in medium-term solutions to supply chain risks resulting from climate change. The company recently initiated a project that is testing the commercial viability of an emerging technology: carbon capture and storage. [6] CCS is a technology by which the exhaust gas from energy production is routed through a carbon capture process which removes nearly 90% of the carbon dioxide. [7] The residual exhaust gas is vented to the atmosphere, while the separated CO2 is deposited in a suitable storage location. While results won’t be confirmed for another 3-5 years, they could redefine the role hydrocarbons play in the global energy future. 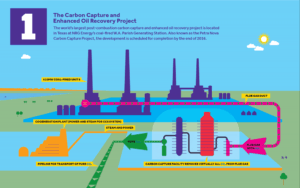 The W.A. Parish coal-fired power plant hosts NRG’s Petra Nova CCS project. [6] This industrial-scale pilot of CCS features a unique solution for the storage of collected greenhouse gases. Concentrated carbon dioxide is transmitted 82 miles to reach the West Ranch Oil Field, where it is pumped into the oil-bearing reservoir through injection wells to improve the amount of oil recovered through a process known as enhanced oil recovery (EOR). [7] NRG worked with the operator, Hillcorp Energy, to propose the plan and acquire royalty interest in the field’s production. Creativity enabled them to mitigate their environmental impact, reduce regulatory risk, and enable economic development.

Additional actions have the potential to unlock further value for the company. Publishing the results from the Petra Nova project would encourage collaboration within the industry, and hopefully yield actionable process design improvements. NRG could also consider implementing other emerging technologies that require pilot testing. NRG is an industry leader with firsthand knowledge of policy impacts, and the company could lobby that knowledge more aggressively with policy-makers to help influence new regulations.

As an early adopter for CCS, should NRG share their insights with their industry or guard them as a competitive advantage? What criteria should NRG use to evaluate prospective power generation projects given the risks that greenhouse gases pose to the company’s supply chain (ex. economic, environmental, social, ethical)?

Wal-Mart’s Sourcing in the Age of ‘Unfair Trade Deals’