In business, there is often little place for concepts of “fairness” or “equity” when seeking shareholder value. As carbon abatement policies emerge, firms face little incentive to bear costs that they could otherwise pass on to other firms within their value chain. This is a blog post about an Australian firm – Coles Supermarkets – which successfully passed on the costs of the ill-fated “Carbon Tax” to its supply chain partners.

The principle behind a carbon tax is to accurately price an externality within a production system. Imagine a biscuit manufacturer who generates carbon pollution while she manufactures your favourite treat. Carbon pollution is a “cost of production” similar to the cost of cocoa beans. However, “the costs of pollution [are] externalised wherever possible and and thus borne by members of the wider community” [1]. This results in more biscuit production than is socially optimal, and shifts the burden of carbon pollution on the wider population.
Put a price on carbon, however, and suddenly the manufacturer has to incorporate these costs into her operations. In response to the higher price, she can either reduce the amount of biscuits she makes, or invest in technology to reduce her emissions. Either way, the result is a reduction in emissions and benefit for society as a whole:

This was the theory behind the Australian Labor government’s “Carbon Tax” in July 2012. Suppliers suddenly found an input cost on the horizon, yet on the other end of the value chain the two largest supermarket chains refused to pass on any price increase to the end consumer [2].

To understand why, consider the state of the grocery industry at the time. Coles had implemented an aggressive discounting strategy, which they funded by using their market power to extract rebates from suppliers [3]. The strategy was extremely effective. Grocery price deflation ran at 2% per annum in Coles [4] and drove significant like-for-like store sales growth versus their major competitor [5]: 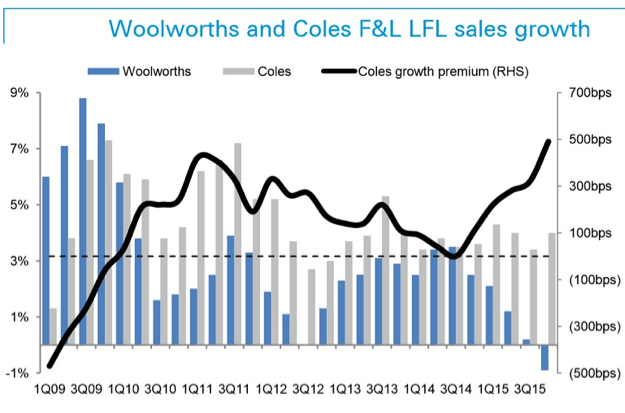 As suppliers sought to pass on the cost of the tax in the form of higher product prices, Coles suddenly faced legislation that was diametrically opposed to their successful strategy. The main issue for Coles was the erosion of competitive advantage. Suppliers might successfully negotiate a price increase with Coles, yet fail to secure the same price increase in other retailers. That would cause Coles to either be price-uncompetitive in market, or face squeezed margins if they did not reflect the new price on shelf.

To counter that, Coles relied on their “price justification process”, a negotiating tool that forced suppliers to justify a price increase by listing their input costs. Coles would then go through line-by-line and refute increases that it felt were unjustified – one of which was the carbon tax.

Furthermore, the credibility of the carbon tax was in question from the day it was introduced:

It was not unreasonable for Coles to assume that, if they could push back on cost increases in the short term, the tax would be revoked in the near future. This is what ultimately happened [6].

It is not equitable, but the lesson is clear. Whilst climate change policy can affect an entire industry, there is scope for firms to shift the burden of the policy onto other entities in their supply chain by leveraging their relative size and by utilising effective negotiating tactics. Furthermore, climate change policy is often controversial. Therefore, before making substantial changes to a firm’s operating model, it is wise for firms to assess whether the policy is likely to exist in its current form within the firm’s investment horizon.

Whilst a price on carbon is unlikely to re-emerge in the near future, Coles will still need to consider how to amend their operating model in a low-carbon future. If suppliers invest in reducing emissions, costs will come down the value chain:

The Stick – whilst Coles enjoys significant market power, so do many of its suppliers. Browbeating tactics would be responded in kind, which results in disengagement and lost sales. Coles should consider planning a thorough negotiation strategy for these discussions and judiciously decide which suppliers can have their cost increases consistently refused.

The Carrot – Coles can also work with suppliers to seek areas of efficiency within their supply chains by reducing logistics costs. It is not uncommon for suppliers to rent space on a retailer’s freight system, for example. There is certainly a more collaborative approach using vendor management inventory that can reduce carbon emissions and maximise profit throughout the supply chain – indicating that there is yet opportunity for retailers and suppliers to walk hand-in-hand towards a more environmentally conscious future.

[4] Colin Kruger and Eli Greenblat, “Suppliers count the cost as Woolworths and Coles shoot it out over prices”. The Sydney Morning Herald, April 21, 2012, http://www.smh.com.au/business/suppliers-count-the-cost-as-woolies-and-coles-shoot-it-out-over-prices-20120420-1xcfl.html, accessed November 2016.

Vail Resorts Could Be Doing More

The environmental impact behind a cereal box: How General Mills is addressing climate change

Student comments on Our Problem Isn’t My Problem: Pushing the Costs of Carbon Mitigation onto Supply Chain Partners