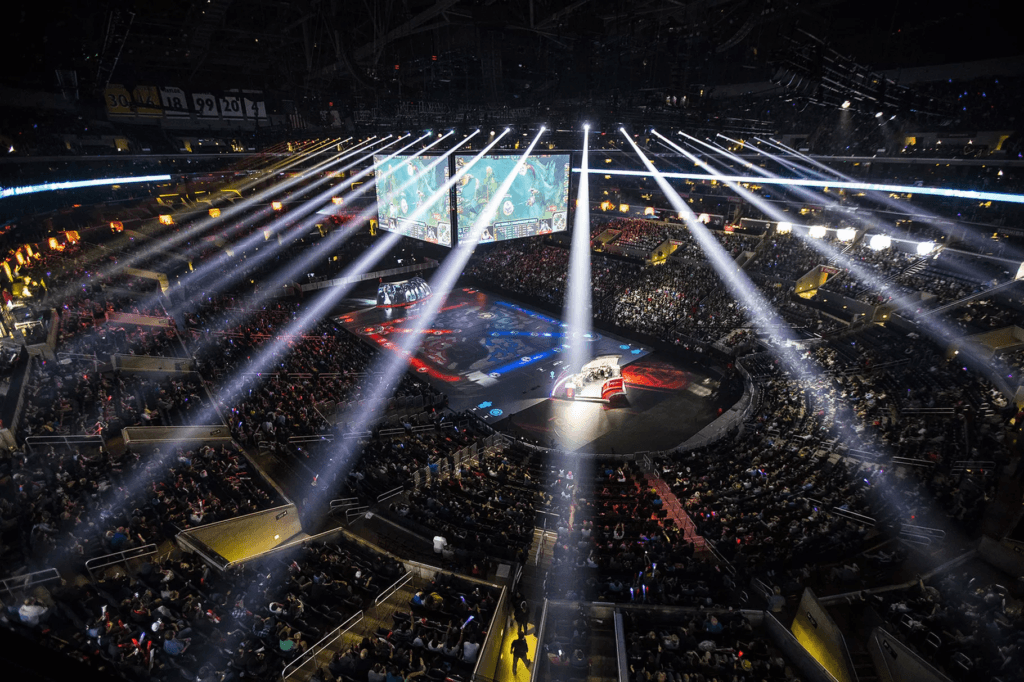 Riot Games is a rarity in the world of large video game developers – it only has one game, League of Legends (LoL). Released in 2009, League is a multiplayer online battle arena video game on the desktop gaming platform. The game resembles basketball where 2 teams of 5 players each play against each to capture the flag, with strategy, teamwork, stars, and heroics similarly at play. Riot operates a freemium model where players play the game for free but can purpose optional visual enhancements that do not affect performance. The game is easy to spectate and has attracted a sizeable e-sports following. On November 3, 2018, the Chinese team Invictus defected the European team Fnatic for the 2018 World Championship in front of a sold-out crowd of 50,000 people in Seoul, South Korea. [2] Viewership data has not been released yet for the 2018 World Finals but it is expected to surpass 2017’s worldwide viewership (47mm people) and US viewership (2mm people).[3] There is an existential question though of whether League of Legends will be sustainably popular or whether it will follow the path of other electronics games in the past and give away to newer game concepts. In this long-term context, it is crucial that Riot utilizes open innovation to support game updates and an ecosystem of players, teams, fans, and platform partners.

Open innovation has been a key part of Riot Games’ development to date. In fact, League of Legends was created as a result of open innovation, with the founders drawing inspiration from a community-created modification to the 2003 Blizzard Entertainment game Warcraft III. [5] Currently, Riot leverages open innovation through releasing data and hosting contests for the community. In 2013, Riot released its developer API program to provide game and player data, which led the community to create useful tools and websites like stats site OP.GG and video site Replay.gg. [6] In 2016, Riot launched an API challenge for the community to create projects around entertainment, usability, and creativity, some of which were then incorporated into the ecosystem. [7]

Additionally, a major contributor to League’s popularity has been the rise of live streaming platforms. Through Amazon-owned Twitch.tv and Chinese platforms like Huya and PandaTV, hundreds of thousands of gamers broadcast themselves playing League to hundreds of millions of viewers, which has dramatically enhanced the game’s popularity. [8] In fact, League has been the most watched game on these platforms, with over 1 billion hours streamed on Twitch.tv alone in 2017. [9] In the live streaming model, streamers share in the platform’s economics based on number of subscribers or viewers and thus compete against each other, allowing for broad experimentation and proliferation of content.[10] Interestingly, Riot Games does not capture any of the direct economics (subscription, advertisement, and micro-transaction revenue) from partner platforms but benefits indirectly from increased popularity of the game. Similarly, many gamers upload League tutorials, replays, or highlights on YouTube and other video channels. Riot’s willing to allow external actors to creatively use and monetize League is a strategic decision to foster content and community innovation in the ecosystem.

Currently, Riot is utilizing open innovation for the development of its ecosystem but not for the continuous improvement of the game itself. I recommend that Riot allow its community to participate in both idea generation and idea selection for game updates. On idea generation, Riot should run additional contests regarding potential innovations such as new playable characters, new rules, or even potential new spin-outs of the game. For distributed innovation systems, the more granular and diverse the tasks, the larger the pool of participants so the contests should be focused on specific ideas.[11] [12]

For idea selection, Riot should allow its community to vote on critical product changes. Companies ranging from Zara to LEGO to Walmart are already utilize polling of customers for decision making. [13] This polling would benefit Riot in two ways – giving outside perspective early in decision making and simultaneously engaging the ecosystem. On the latter, we know that a strong sense of identity and community belonging motivates distributed innovation participation. [14] The act of participating can also be empowering though and increase sense of community in a virtuous cycle.

Riot Games has successfully leveraged open innovation in ecosystem development and can complement that with open innovation in game updates. An open question is whether Riot’s focus on a single game can successfully compete in the long-term with the innovation potential of a multi-game company like Valve (which developed League’s primary competitor DOTA2 and distributes 3rd party games through its Steam platform[15])? Can any one video game, however managed, truly have the longevity of basketball?

Highway to the danger zone? Machine learning at DHL

Student comments on Open Innovation for League of Legends