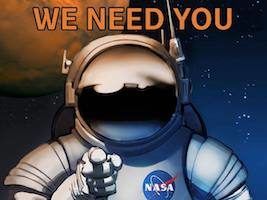 NASA has been innovating in space exploration since 1958. NASA successfully put a man on the moon in 1969 and had continued pushing the boundaries of science since then. A key component of NASA’s success comes from the innovation of world-class highly-specialized scientists and professionals working on the research and development department of the agency. Traditionally, these knowledge leaders work within the organization and only collaborate with public and private organizations of their choosing to bring knowledge into their innovation process. To continue enhancing its innovation capabilities, in 2009 the agency started an open innovation initiative which proved to be very successful by achieving significant scientific breakthroughs at extraordinary speed and with extremely little resources. Despite its success, the open innovation initiative generated divergent opinions among the R&D professionals working at NASA, where one group felt threatened and insulted by the initiative, causing disturbance in their work, processes and culture. The problem that NASA faces with the implementation of open innovation is how to organize and shift the culture, roles and processes to embrace such trend.

At NASA the standard R&D process take 3 to 5 years. In 2009 when the open innovation initiative was first implemented, the average cycle took 3 to 6 months. Also, the cost of the standard R&D process is very high versus the open innovation process where very little resources where committed (NASA offered awards to winners in the range of $15,000 to $30,000). In 2009, 14 problems were revealed to the public, 114 NASA professionals worked using the standard process, while more than 3000 individuals worked using the open innovation model. The solutions shared by the public exceeded NASA’s expectation. As a lead scientist mentioned, “In general, it is known that to receive a solution for that cost [the open innovation award] would not be possible otherwise. Turnaround time for a solution like this could take years under the standard R&D model.” The most successful solution among those received in 2009 came from a from a semiretired radio engineer, who proposed a completely different approach to forecast solar flares coming from solar storms, the algorithm he created was 25% more accurate than the solution proposed by NASA’s scientists under the slower and more expensive standard R&D process. These results represent for NASA a whole new way of doing business.

To tackle the problem about changing culture and processes when open innovation is implemented, first it is important to understand who are the individuals that are currently pushing innovation at NASA. These R&D professionals are highly motivated by innovating, in arguably, one of the most groundbreaking organization in the world. These professionals are willing to take a pay-cut to join NASA and consider themselves “problem solvers”. The level of expertise these professionals have creates substantial knowledge boundaries, and a good portion of these professionals usually keep their knowledge inside these boundaries. Unless willingly chosen, innovation coming from outside these boundaries will not be welcomed. The introduction of open innovation crosses these boundaries giving the opportunity to anyone from the outside to share their knowledge. Under an open innovation initiative R&D professional need to shift from being “problem solvers” to “solution seekers” and to look at the world outside their labs. Also, to implement open innovation, R&D professionals need to share the problems they are trying to solve in the first place. When the initiative was implemented by NASA in 2009 the opinion of the R&D professionals was split, leaving those more reluctant to change feeling threatened and undervalued. A part of this group openly attacked and criticized the initiative, while others just ignored the finding shared by the public. As a senior scientist, noted: “I’ve been attracted to places that allow you to access a problem, come up with a plan, and execute the solution . . . to be able to think and solve greater problems. If I can’t do it at NASA, what is keeping me from going somewhere else?”.

To shift to an open innovation model, NASA is organizing some of its internal departments (such as the Human Health and Performance Directorate) differently, addressing to both structural and cultural changes. Scientist eliminate knowledge boundaries and open their R&D strategic challenges and data to the public. Another key part is taking the internal development software to an open source, allowing internal knowledge to flow. Also, integrating and utilizing the external knowledge received through the open platform. NASA should continue to gradually incorporate open innovation into some of its processes, given the efficiencies generated with such model. However, NASA needs to put special attention on how implement the change since culture inside the organization could be negatively impacted.

The Perfect Fit? Adidas Sprints Ahead with 3D Printing

The long awaited tech disruption of the legal sector

Student comments on Open Innovation at NASA: Impact in Culture