“Open for business” is not a slogan often tied to a government agency, yet that was the tagline used by General Manager Brian Shortsleeve (HBS Class of 2001) to describe the new state of affairs at the Massachusetts Bay Transportation Authority (MBTA) in the fall of 2016.[1] Still recovering from record-setting snowfall in the winter of 2015 that had crippled public transit operations, the MBTA faced a number of financial and operational challenges that the terrible winter had exposed to the broader public. In particular, the agency confronted an operating budget deficit that was projected to exceed $300 million by FY 2018, as well as a $7 billion maintenance backlog.[2] To complement internal reform efforts already under way, MBTA officials hoped to solicit innovative solutions from outside the organization to tackle these problems. After all, the MBTA served some of the most innovative businesses and academic institutions in the country throughout the greater Boston area. Why not tap into their ideas for solving the myriad challenges facing the organization?

To engage with the outside world on potential innovations, the MBTA developed an “Innovation Proposals Policy” that went into effect in October 2016. The MBTA created a portal on its website through which ideas and proposals for service improvements could be submitted (Exhibit 1). According to Shortsleeve, the goal of the policy was to “encourage private industry, associations, groups, to put ideas in front of the [MBTA] on an unsolicited basis on ways that we can operate more effectively and serve our customers better.”[3] Interest was strong from the business community in particular, and the MBTA received 12 “innovation proposals” within the first month.[4] This new open innovation platform provided the resource-strapped government agency with the means to generate innovative ideas at no additional cost to the organization.

Proposals have ranged from innovative ways to provide late-night bus service to radiant heating technology capable of preventing snow accumulation on station platforms. One of the first proposals was submitted by the on-demand transportation company Bridgj, which proposed to deliver late-night bus service in a more cost-efficient manner than the MBTA’s traditional fixed route model (see Exhibit 2, the MBTA had been forced to cancel late-night bus service in 2015 due to high per-trip costs).[5] As a further example, the Dutch technology company HSI BVBA offered to install specialized heating coils under station platforms to melt away snow during the winter and reduce the need for labor-intensive shoveling and plowing.

Since the policy’s inception two years ago, the MBTA has received 111 innovation proposals, only 3 of which (2.7%) have been procured and/or implemented (Exhibit 3).[6] These proposals have proven a useful tool for retrieving fresh ideas on operational improvements from the private sector. But given the relatively low uptake of submissions, the MBTA should take proactive steps to maintain active external interest and engagement in the medium-term.

First, the MBTA should strive to be more transparent and responsive with regard to the scarce internal resources it has available to assess the feasibility of innovators’ proposals – a key limiting factor that has prevented the acceptance of more ideas.[7] A resource-strapped agency like the MBTA does not have executive-level managers with ample spare time to evaluate proposals. And even if the agency has the resources available to perform feasibility assessment, the internal evaluation process often takes up to the full 60-day timeframe that the MBTA allots itself for a go/no-go decision. The MBTA should actively communicate with proposers throughout the internal evaluation period to better align on expectations considering these circumstances. Second, the MBTA should make it routine practice to thank publicly all proposers whose ideas are not ultimately selected in order to incentivize continued participation, whether online or at weekly board meetings.[8,9]

In addition, the vast majority of proposals have been submitted by for-profit companies hoping to do business with the MBTA. Noticeably absent from the submissions are ideas from academic institutions, transit enthusiasts, and ordinary citizens who have no extrinsic motivation for participating.[10] Of the 111 innovation proposals received to date, only 11 have been submitted by individuals and non-profits (see Exhibit 4).[11]

Moving forward, the MBTA faces a fundamental choice about how to manage its new open innovation platform. Should the MBTA continue to promote the competitive market environment that has emerged organically since the introduction of its innovation proposal policy, with the bulk of submissions coming from for-profit entities?[12] Alternatively, should the MBTA attempt to market the online portal as a more collaborative community for the joint development of ideas among individual contributors and transit enthusiasts?[13] 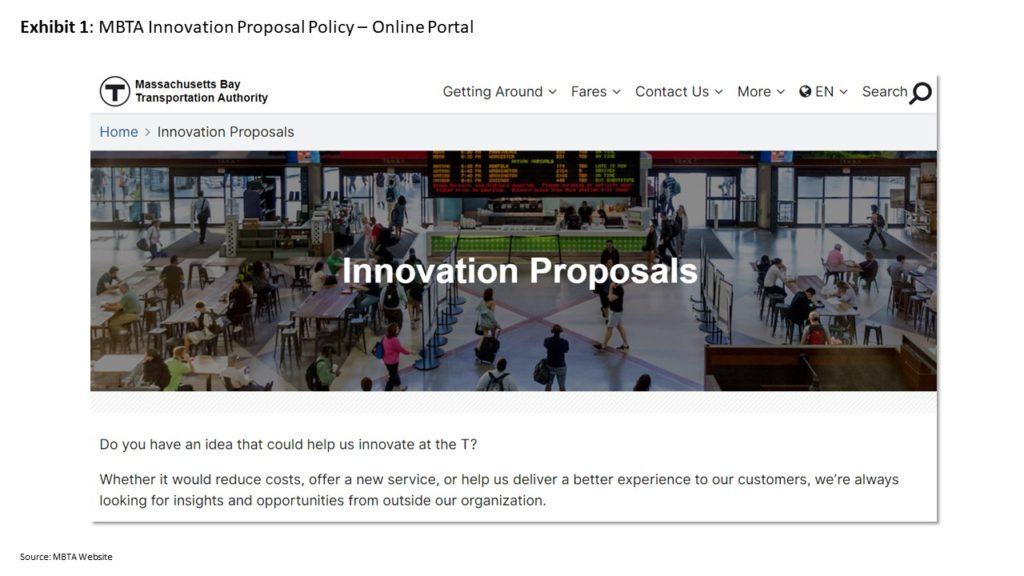 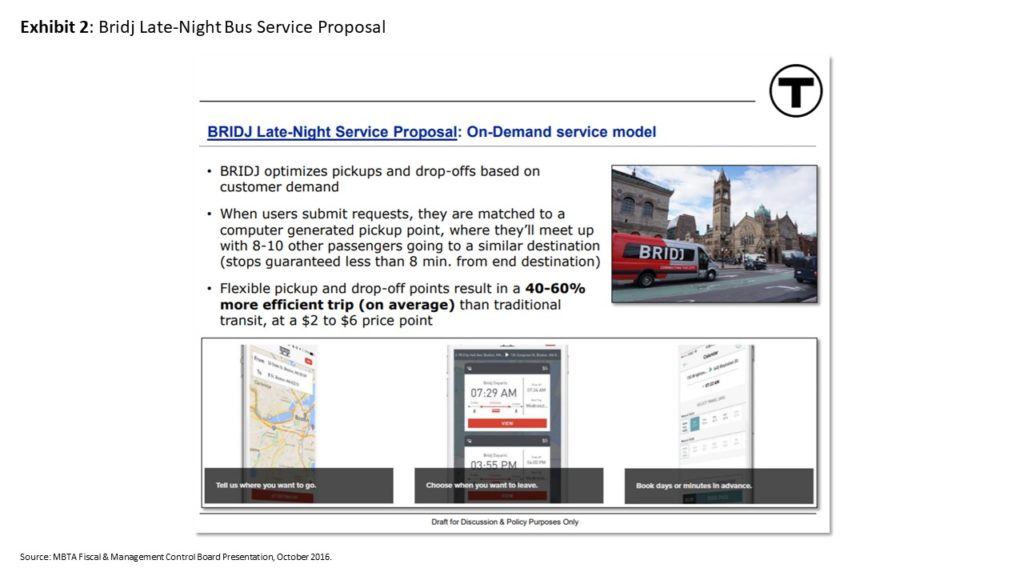 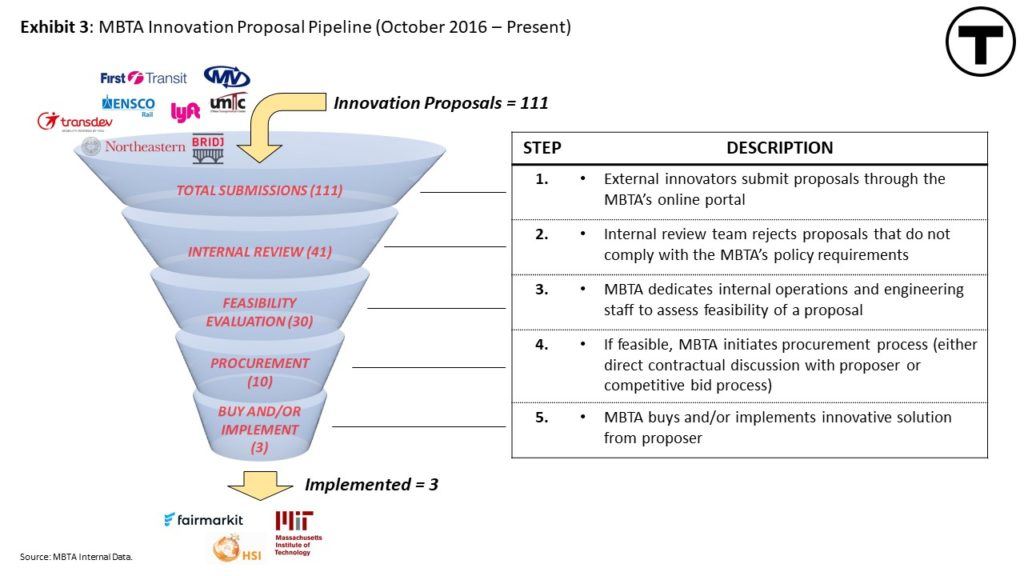 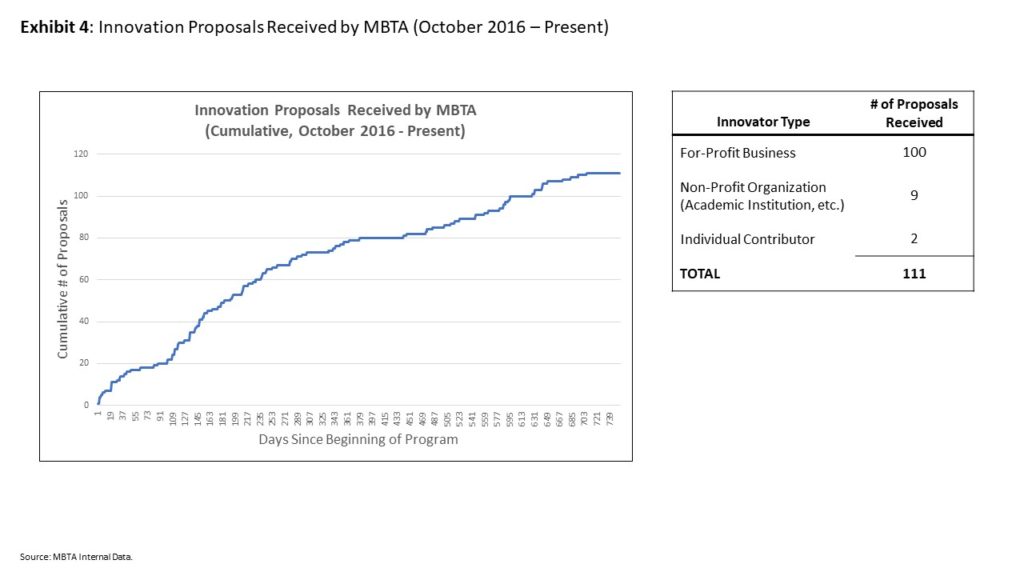