Many industries have implemented the use of digital technologies to improve their operating models, but one industry has lagged in that adaptation: oil and gas. The oil and gas industry lost motivation for continual improvements and application of new technologies, and instead, became lazy during the time of high margins. The crash of crude oil price in November, 2014 set shock waves through an industry that had become very comfortable operating in a $100+ barrel environment and now needed to focus on squeezing a profit out of productions. The companies that invested in digital innovation in the field have rebounded since the crash, while other companies continually approach bankruptcy. One company, Devon Energy, is leading the way in using the digital oilfield and data analytics to improve performance and operational efficiency. [1]

The Old Barriers to Digitization Have Disappeared

When crude oil demanded a high price, exploration and production (E&P) companies focused on high production levels to meet demands and maximize revenues. Experimenting with new technologies was viewed as a distraction and possible delay in production. [4] This barrier to explore digitation disappeared with the oil crash. Over the past couple years, companies have been under immense pressure to decrease costs, especially the large capital investment required to drill new wells. There has been a shift in focus from exploration drilling to production optimization, incentivizing investments in digitization to maximize the recovery of existing wells. As show in Figure 1, “revenue has decreased 40% since 2014; however, operating expenses have declined by only 9%” [2].Companies are now taking the time to pause and ask how they can increase revenues without adding additional costs. 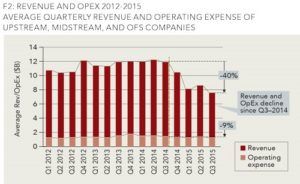 Thousands of professionals will be retiring soon in the oil and gas industry during what’s known as “The Big Crew Change”. The age gap within the industry, due to the historical boom and bust cycles, will soon lead to a deficiency in qualified technical professionals. This gap in experience further incentivizes companies to use automation and digitization to speed up routine analyses and aid in decision making. [5] As a younger generation takes control of the industry, the convergence of data, machines, and people to implement automation also eases. Companies hope that the tech-savvy millennials will help make up for the lack in experience by using new technologies and a fresh set of eyes. [4]

There are opportunities for digitization to improve asset reliability, boost throughput, and optimize field recovery. Installing sensors in drilling tools and on production wellheads can provide live data for decision making and analytical analysis. Since Devon began investing in big data in 2012, production rates from horizontal wells have increased by 250% and costs to drill, complete, and operate its wells have fallen by 40%. [1]

Geosteering is one area that Devon says has improved results significantly with automation and analytics. Geosteering is the intentional directional control of a well using downhole geological measurements. [7] Most geosteering tools provide a geological picture of the wellbore that lags the bit location by about 100 ft. This data is delayed and open from many interpretations. Devon developed a real-time drill bit tracker that uses artificial intelligence and machine learning to determine the best path to drill a well. [1]

Other companies are following. Over the next three to five years, approximately 80% of the oil and gas industry professionals surveyed said they plan to invest the same amount (18%), more (44%) or significantly more (18%) in digital. [3]

A digital transformation requires a shift in the mindset of oil and gas professionals, which is long overdue. The outdated drilling and production methods previously used by E&P companies are no longer sustainable in a low oil price, but companies can survive by using an exchange of information from smart elements that enables “expansive monitoring, integrated operations, remote configuration and optimization, and even self-management” [2]. Devon has set an example of the improvements that can be made, and the rest of the industry is likely to follow.

Netflix and Chillin’ in the Mile High Club

The Age of Smart Iron