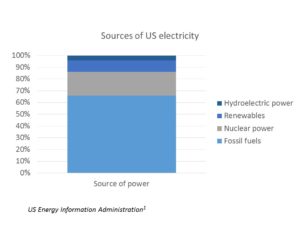 The need for nuclear power

Today, the energy industry supplies America’s 28 trillion kWh/yr power demand with fossil fuels, nuclear power, renewables, and hydroelectric power1. The immense portion of demand fulfilled by fossil fuel is under direct attack due to its CO2 emissions and contribution to climate change, leading the power industry to look for clean solutions. Renewables are growing, but are unable to provide base-load power (i.e. the sun is not always shining, the wind is not always blowing) and currently rely heavily on government subsidies to make the economics work2. Nuclear power presents waste and security concerns, but can sustain base-load power and is a complete carbon emission-free solution3.

However, nuclear energy’s days of positive contributions to clean energy are numbered if current trends are not reversed. 83 of America’s 100 nuclear reactors are 30+ years old and thus nearing the end of their 40-year license period4. These reactors require significant investment to upgrade and qualify for a new license, leading utilities to often take reactors offline rather than invest heavily in 1960s-era technology. Until last month, no new US nuclear capacity has come online since 1996 due to enormous up-front capital costs and lengthy construction schedules5. Thus, instead of increasing zero carbon energy production, the nuclear industry’s contribution is holding steady at best.

NuScale Power has identified the need for nuclear to continue contributing to clean energy and is creating a business model that makes investing in new nuclear power capacity an attractive option for utility companies. Thus, rather than create challenges, climate change’s pressure on the energy industry has created opportunity for NuScale.

NuScale’s business model is based on solving the 5 challenges commonly associated with nuclear power:

By addressing the critical nuclear power challenges, NuScale has built a business model that is not only immune to climate change but poised to benefit from the growing demand for clean energy.

NuScale’s first product installation in Idaho should be its primary focus in the coming years. However, NuScale should not lose sight of developing its operating model in this time. NuScale is the company closest to filing a modular reactor design certification application with the NRC and all eyes are on its success. As the demand for clean energy is and will continue to grow quickly, NuScale’s success will be attractive to many utility companies looking for clean energy solutions. To capture the market demand, NuScale will need to be in a position to quickly scale its sales, design, and construction operations after the Idaho facility goes online.

NuScale also faces significant headwinds is public perception. The recent core meltdown at Fukushima has led many countries to shut down or halt construction and investment in new plants. Culturally, images of ghost towns and stories of families unable to return to their homes generated stigma against nuclear power for the damage it can cause. NuScale is a utility partner rather than a public-facing entity so it does not need to go so far as to launch a pro-nuclear PR campaign, but it does need to be aware of the social stigma working against it and be extra cautious to not have accidents that further opposition to nuclear power.

On a more positive note, if NuScale is able to truly solve the challenges facing nuclear power and create a way to mass produce clean energy, it will become a 21st century icon. We will see how the story plays out…

The NIKE Model: Garbage In, Sneakers Out