Are the bad guys in hospitality actually the most eco-friendly?

The hospitality industry’s service is predominantly based on serving the world’s population with an experience of comfort and indulgence that allows them to escape the drudge of their everyday lives. Though the industry has set out some targets for sustainability, Professor of climate change at the University of Manchester, Kevin Anderson, cautioned leaders in hotel industry about the inadequacy of the existing targets at Responsible Tourism Day in November 2015[1]. Moreover, within the hotel and resort industry, luxury gaming resorts are commonly viewed even further as destinations of excess, waste and lavish living, but is that characterization a fair one?

What Is Global Warming And How Does The Hospitality Industry Play A Role?

Since the industrial revolution the earth’s average temperature has increased by 1.5 degrees Fahrenheit, predominantly driven by increases in the output of greenhouse gases into the atmosphere such as carbon dioxide, methane and nitrous oxide[2]. Greenhouse gas emissions have increased significantly since the 1800s, primarily driven by the burning of fossil fuels and the clearing of forests and other agriculture practices.

The hospitality industry is a massive user of electricity and water, and produces hefty amounts of trash and food waste. The hotel and resort industry pours in billions of dollars into state-of-the-art facilities world-wide without any eco-friendly systems in place. These facilities produce an immense amount of greenhouse gas through blasting air conditioning and recklessly leaving lights on 24 hours a day. Experts find it crucial that moving forward hotels begin to invest some of their billions to have energy generation on-site and utilize building energy management systems to reduce their carbon footprints[1].

Las Vegas Sands (NYSE: LVS) is a casino and resort operator based in Las Vegas, Nevada that owns famous properties such as The Venetian and The Palazzo. The company develops and operates destination resorts that include luxury accommodations, gaming, high-end retail, five-star dining, shows and entertainment, and convention and meeting space. The company operates 10 facilities in Las Vegas, Bethlehem, Macao and Singapore including three of the world’s largest convention centers[3].

In 2007, Las Vegas Sands was one of the first resort companies to integrate LEED Green Building standards, into its construction of The Palazzo[4]. LEED building design and construction standards put forth by the US Green Building Counsel make up the most innovative green building framework in real estate development[5]. In 2010, Sands launched their ECO360 Sustainability program making them one of the first movers in creating a holistic eco-friendly program in gaming. The program was built on four pillars, Green Buildings, Environmentally Friendly Operations, Green Meetings and Stakeholder Engagement. 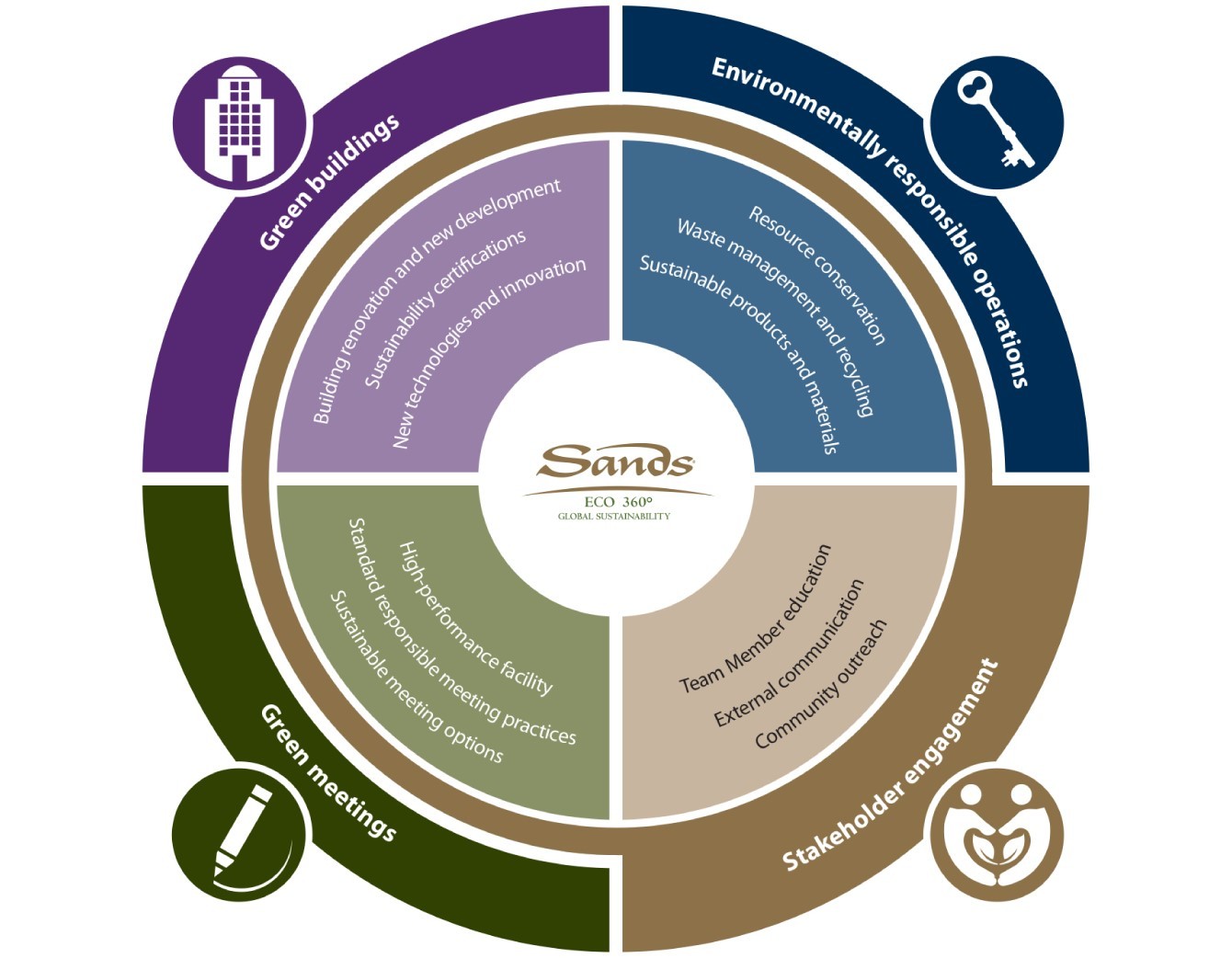 The company saves nearly 100 million gallons of potable water per year, recycles 55 percent of daily trash and 75 percent of food waste, and saved ~113 million kWh in 2014 through efficiency projects[6] [7]. They accomplished the water targets by using water control and recycling systems and implementing foam soap. The recycling and food waste targets were achieved by optimizing operations and sending food waste to local pig farms for feedstock. The energy savings were driven by efficient HVAC systems and changing to LED lights[7]. These initiatives from the ECO360 program were clearly seen by the world on June 2, 2016, when Las Vegas Sands was ranked highest among all hospitality companies in Newsweek’s Green Rankings both for the US and the whole world[8]. The company was ranked #39 in the US and #74 in the world on respective lists of 500 companies across all industries.

Operating in the luxury gaming industry is one that puts a giant target on the back of your company in terms of corporate responsibility. Therefore, if a company wants to be in this lucrative business it’s important that they understand that they will need to be exceptional corporate citizens of the globe. Despite the negative perceptions of gaming hospitality establishments, Las Vegas Sands has been a leader in pushing the envelope in terms of building an eco-friendly business model. They have created initiatives ahead of any of their competitors and are a model for not just luxury resorts but the whole hospitality industry. (717 words)

Unilever – Changing the business model of a $125B giant

Student comments on Not Only Is Vegas Taking Your Green, It’s Going Green Too