Climate change has traditionally been viewed through the lens of economic threat, but significant opportunities also exist.  Steady reduction in polar ice due to increased temperatures has introduced drastically shorter shipping routes between Asia, Europe, and North America.  As more shipping companies take advantage of these routes to shorten their supply chains, demand for polar infrastructure are increasing.  Atomflot, a subsidiary company of Russia’s state-operated nuclear conglomerate Rusatom, operates nuclear powered icebreakers in these waters[1].  As traffic increases, Rusatom needs to expand their investment in new equipment to take full advantage of this positive aspect of global warming. 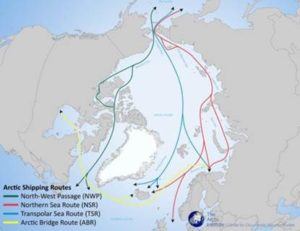 Two of the primary shipping routes between Asia, Europe, and North American ports are the Suez Canal Route (SCR) and Panama Canal Route (PCR).  The Northern Sea Route (NSR) is not a single route but a combination of passageways connecting Europe and Asia.  The Northwest Passage (NWP) is a similar collection of routes in the Arctic waters north of Canada, shortening the trip for North American bound Asian and European ships[3].  Figure 1 depicts the northern sea routes, and Table 1 compares distances between major ports utilizing various sea routes.

While shorter distances clearly show the benefit of northern routes, significant sea ice has traditionally prevented use.  This is gradually changing.  The Intergovernmental Panel on Climate Change (IPCC) has shown that sea ice coverage in polar regions has decreased at an average rate of 3.8% per decade since monitoring began in the mid-twentieth century.  This reduction has been irregular in space and time, with 49% reductions in September compared to less than 2% reductions in March.  As the rate that ice retreats in summer months and expands in

winter months changes, thickness of the ice is also affected.  Average polar ice thickness has decreased by 1.8m in the same period as the 3.8% coverage decrease[5].  Experts mostly agree that polar ice will not fully disappear in this century, but the steady decrease in coverage and thickness allows for ice-breaker assisted transit.  Demand for icebreakers is also assured by NSR regulation – Russia operates the Northern Sea Route Administration (NSRA), which forecasts ice coverage and mandates icebreaker escort for most vessels[6].  With their unique capabilities, Atomflot is poised to capture significant value from environmental and regulatory conditions.  Demand for icebreakers already results in hour or day long waits to transit the NSR, which will continue to increase if demand for more icebreakers is not filled by Atomflot[7]. 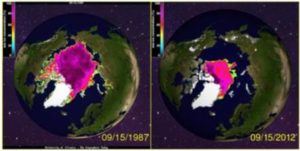 Atomflot currently operates four nuclear powered icebreakers, and in response to demand has ordered an additional three, all contracted to be operational by 2020[9].  Atomflot faces several other decisions and opportunities.  The first relates to service life extension of existing icebreakers.  The ships were designed for 100,000 hours of active icebreaking over 26 years, putting two of the existing ships up for retirement within a year of 2020’s new ships.  Maintenance upgrades exist that have already extended one vessel’s life to 171,000 hours, with the possibility of 225,000 hours[10].  The significant investment of new ships will add no permanent capacity to the fleet without these upgrades, so Atomflot should extend the life of all existing ships to the greatest extent possible. Atomflot and the Russian government should also consider extending their market into the Northwest Passage, where ice is a greater threat to shipping than on the Northern Sea Route.  By increasing capacity and expanding markets, Atomflot will create a mutually beneficial situation for themselves as well as shipping companies taking advantage of the shorter routes.

Completely reliable climate change predictions would make the number of new ships to build a straightforward analysis.  Much subjectivity remains, forcing the question of what assumptions should Atomflot and similar companies make about the next hundred years?  The opportunity window for profitable icebreaking operations exists between the present day and whenever rising temperatures result in permanent open waterways over the poles.  Some experts put that as soon as 2060, at which point large capital investments in icebreakers would be useless[11].  Regardless of the specifics, trends in climate change show that anyone involved in international shipping will see significant impact to their supply chains in coming years.

No More Chocolate For You: Global Warming and Cacao Trees

Digitalization In the Upstream Oil and Gas Industry