Next time you go to Shad, take a look around. Are many people meeting with a personal trainer, nutritionist or fitness staff? Probably not. Instead, everyone’s eyes are glued to their smartphones. From smartphone applications devoted to calorie counting to applications geared to virtual fitness competitions on number of steps taken, digital technology has completely disrupted the fitness industry.

Digital Fitness on the Rise

Wearable technology has increased from 5% to over 20% penetration of the North American population. Based on PWC’s Global Study on Wearables, over 60% of these devices are considered personal fitness devices [1]. In 2015, global shipments of wearable fitness devices were 70.2 million units and the total market is projected to be $30 billion by 2018. The widespread use of wearable fitness technology and fitness smartphone applications has resulted in a shift to mass public use of previously insulated and premium services offered at fitness centers. For example, the mass public can now receive personalized fitness video training, coaching, consultation, guidance, and community and data tracking all for a low cost, or in some cases even a freemium model [2].

An Opportunity for Equinox

Some may argue that the rise of digital technology is a huge threat to the traditional fitness industry; however, health clubs such as Equinox view the rise of fitness technology as more of an opportunity than a threat. Equinox was the first chain to partner with Apple when it launched its Healthkit smartphone app in June 2015. The app syncs with members’ wearable technologies to track fitness data, analyze member behavior, and provide users with recommendations, tips and content to improve their fitness routines. 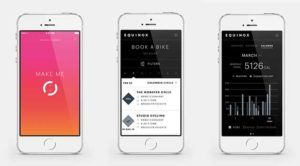 Key features of the app include [4]:

Furthermore, as shown in this video of Equinox President Sarah Robb O’Hagan, Equinox is also actively considering ways to incorporate digital technology into its business model. One other example is through the Company’s new spinning classes called “The Pursuit”. The spin bikes are equipped with digital screens and sensory technology which incorporates gaming and digital visualization to inspire peak individual and group performance. The bikes essentially show gym members how they are performing compared to their peers. As a result, this inspires competition and encourages people to push harder.

So, What Else Should Be Done?

While Equinox has taken a step in the right direction by adapting its business model to incorporate digital technology, it is imperative that the company continue to innovate and focus on upcoming possible disruptive technologies in the fitness space. My view is that Equinox should focus on the following [5]:

What is your view? Does the rise of technology present an opportunity or a threat to the traditional gym market?

Getting Smart: How Progressive Is Deploying Data To Win in Auto Insurance

Netflix and Chill? The Rise of a Tech Media Powerhouse

Student comments on No Personal Trainer? No Problem!