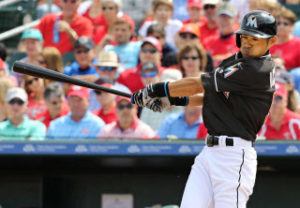 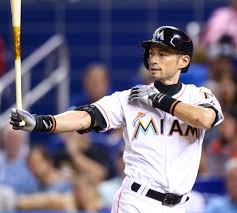 What is the difference between these two pictures of Japan’s national treasure, Ichiro? You notice that the color of his bat has changed. His bat is now made of white ash instead of aodamo.

Did Ichiro make this switch for technological excellence? The answer is no.
In a March 2016 interview with Nikkei, Ichiro said “there is just no more aodamo.” [1]

Many Japanese professional players grow up playing baseball with aodamo bats. The aodamo trees, which take 70 years to produce four baseball bats per tree, were grown in Hokkaido, the northern island in Japan. While the depletion of the aodamo forests are primarily due to human felling, global warming has expanded the frontiers for emerald ash borer, a tree-killing pest, up north. While aodamo is a baseball bat raw material specific to Japan, the United States and major league baseball faces a similar issue. “Given enough time, nearly 100 percent of all green, white and black ash will be killed” by emerald ash borer throughout their North American range, according to a 2013 US Forest Service Study. [2]
This poses a serious threat to Mizuno Japan’s primary baseball bat manufacturer. As long as the professional baseball players prefer using wooden bats instead of metal bats, Mizuno would be confronted by a decreasing supply of raw materials. The business opportunity arising from climate change under the current context seems non-existent; unless this limitation on raw material supply invites innovation in utilizing alternative materials to create better baseball bats, there seems to be no upside from the depleting aodamo forests.

How has Mizuno approached this issue, or in a broader sense, strived to be environmentally friendly as a consumer of wood? One generalization for Japanese manufacturers is that they have implemented environmental measures early on in reaction to severe instances of pollution-related diseases from the 1950’s to 1970’s. Furthermore, the Japanese culture frowns upon waste as “mottainai,” a concept that has been prevalent since the post-war period as the country recovered from poverty. On the back of these societal contexts, Mizuno has been undertaking actions to cut the environmental impact of manufacturing since 1991. Some of its earliest initiatives include acquiring the ISO 14001 certification as the first in the sporting goods industry in 1997, simplifying packaging and introducing foldable delivery containers, recycling and using organic solvent in factories, and using recycled raw materials, such as rubber and cotton, in their athletic gears. In terms of baseball bat production, its factory achieved zero emission in 2002, started recycling wood that was not fit for bat production to produce wooden artwork, and has participated in the “Bat Forest” project, planting aodamo trees in Japan to preserve the culture of aodamo bats for the future. To achieve GHG reduction, which is also impacting aodamo forests, Mizuno has implemented measures such as switching the AC/heater from gas to electricity and using electric vehicles at the corporate level, successfully reducing gasoline consumption by 6.3% compared to the precious year in 2015.

While the company has reduced CO2 emission in its domestic offices and factories by 4.2% in 2015, the reduction of GHG emission of its entire global operation was only 0.2% in the same period. Therefore, while the company has exemplified an environmentally friendly company in Japan, I believe they could expand its initiatives globally. Specifically, GHG emission in the US increased by 11.6% in 2015. [3] While it may be difficult to reduce GHG emission in the emerging markets that they operate in, I believe the company could apply measures that it implemented in Japan to make its US operations more environmentally friendly. Perhaps they could also plant ash trees in the US as part of CSR for its operations here so that future Japanese major league baseball players could use Mizuno bats that were produced in a sustainable manner.

The world’s first self-sufficient winter resort: Skiing in the heat

Vail Resorts: An Avalanche of Change

Student comments on No, my name is not like the baseball equipment brand