As the end of 2017 is drawing near and celebrations are coming, you may have started to look for the next great Champagne to taste… But what if I told you that you should consider a sparkling wine instead?

Taittinger is one of the oldest and most traditional Champagne producers. Located in Reims, France, it was founded in 1734 and rebranded in 1932 after being bought by Pierre Taittinger. Today, still a family business, Taittinger produces 6 million bottles that sell for a total of 150 million euros[i]. Taittinger is “the smallest among the big ones” as it competes directly with the likes of Veuve Clicquot (part of LVMH group, 19 million bottles) and Moet & Chandon (30 million bottles).

To seduce, Taittinger relies on Champagnes strong on Chardonnay (40%) as well as the regular launch of exclusive products such as the 2014 World Cup Special Edition NV Brut [ii]. 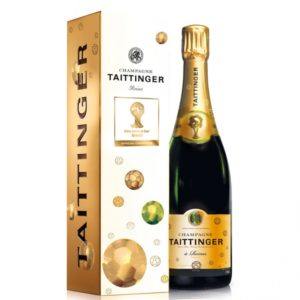 Still, Taittinger’s main competitive advantage is legal: the right to brand its sparkling wines Champagne. That right, protected by the European Commission, recognizes the Champagne region and its winery products as a Protected Designation of Origin and under that ruling, the name Champagne can only be attributed if both the growth of the grapes and the production process took place within the Champagne region[iii].

That ruling not only makes the land of that region very expensive but also very sensible to climate change.

Global warming has so far been good for Champagne makers as increased temperatures reduced frost damage and acidity levels while increasing sugar levels, making it easier to comply with strict production ruling[iv]; however, Champagne makers should be concerned as they may be facing much harder consequences:

The overall consequence is a shift in the competitive landscape fueled by rising competition from sparkling wine producers who benefit from “improved” climatic conditions. This was reflected during the 2016 Paris blind tasting session in which the £40 Nyetimber sparkling wine from West Sussex, England beat the £65 Billecart-Salmon Grand Cru Champagne[viii]. Such phenomenon should not be seen as an oddity but rather as the new normal, supposed that global temperatures keep rising, potentially rendering Champagne climate unsuitable for Champagne production.

In that scenario, Taittinger took a bold approach and decided to embrace the rise of sparkling wine by acquiring 69 hectares of land in Kent to start producing a premium English sparkling wine (to be first tasted in 2023)[ix].

This expansion strategy presents the long-term benefit of bringing geographical diversity to reduce the impact of climate change on the business but also presents some challenges:

To maximize its chances of success, Taittinger should focus on two aspects:

One question not addressed is the response that would have major Champagne producers if Champagne region became unsuitable for production. Would they turn towards sparkling wines? Then, would they advocate for a change in the definition of what is Champagne, by, for example, asking that grapes could be grown in other regions?

BMW’s supply chain in the face of isolationism

Student comments on No more Champagne?