Originally used for the sole purpose of physical exercise, sneakers have now become the most ubiquitous type of shoes worn globally. The democratization of sport shoes globally can largely be attributed to Nike. Started by Phil Knight, in the back of his truck in Oregon in 1964, Nike has emerged as the leading actor in the sport shoe business, totalling 63.000 employees globally and generating $31B in sales and $3.2B in Net Income in 2015. {1} 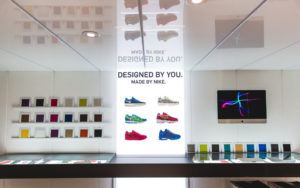 Despite the revolution in terms of scale that the market has seen over the last five decades and the necessary changes in logistics that it required for global players, no revolution has brought more innovation to the operating model of shoe manufacturing than NikeID. For decades, the selection of colours was limited for each design, with most of the shoe coming either in black or white. At a time where customers are more and more looking for customization and differentiated items, Nike has introduced a game changing platform to change the way sport shoes are bought. {2}

How did modern technology allow Nike to revolutionize the way sneakers are designed, produced and distributed ? Can it be economically viable to give the end consumer the control over the design of the shoes they want to wear ? 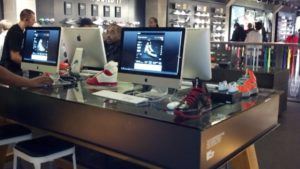 Originally launched in 1999, NikeID is a service allowing customers to design and customize their own nike shoes. Initially launched as an online service only, NikeID soon made its way to physical Nike retail stores as “stores-in-stores” where users could customize their shoes with the help of the Nike sales representatives. In 2012, with the increase of m-commerce, Nike release mobile apps allowing the end consumers to design and purchase their shoes directly from their smartphones. {2}

This groundbreaking innovation marked the end of an era of “monolithic” operational model where manufacturers had to anticipate the overall demand for each SKU, colour and size, manufacture overseas and distribute across markets. With NikeID, Nike would first find a way to increase the “Direct To Consumer” channel that is so strategic to them due to higher margins, as the middlemen (the retailers) get cut. Rolling out NikeID and expanding the program to their physical stores would be a very differentiated selling points for customers around the world. The promise of wearing customized shoes would also justify the user to pay a price premium on the shoes they buy through the NikeID channel. According to Forbes, Nike has been able to raise their “Direct to Consumer” sales from 22% of total sales to 30% in 2015, growing their overall margin by 1.4% year on year (from 2014 to 2015),with NikeID being a strong driver of this growth. With e-commerce representing a mere 20% of the “Direct to Consumer” sales, NikeID has a lot of room to grow and has a very strategic role to play in Nike’s future development. {3} 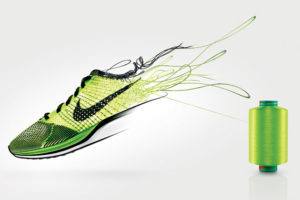 Besides, by adopting this differentiated operations model where “Just in Time production” and “demand flow technologies” are replacing a heavy and cumbersome traditional demand and planning and production process, Nike has found a way to exponentially increase the number of SKUs they can offer at a very limited incremental inventory and raw material cost.s The raw material used for the customized sneakers are not dramatically different from the ones used for the “traditional sneakers” manufacturing. The main difference lies in the combinations made possible to the user who can choose between dozens of colours and textures for each of the components of a specific shoe. The beauty of the NikeID model lies in the fact that Nike is only marginally sacrificing the economies of scale that its regular business enjoys when purchasing raw materials. New designs are now increasingly engineered to be easily customizable, as is demonstrated by the recently released range of Nike FlyKnit shoes. {4}

Nike mentions that customized shoes required between four to six weeks to be delivered to the end customer in the US {7}. While this can appear as a long time, the customization of the shoe provides a valid enough for the consumer to accept such a long timeframe.

More than a gimmicky addition to Nike’s ecommerce strategy, NikeID now generates a “significant revenue and a large portion of our total e-commerce business,” says Ken Dice, Nike’s Vice President of NikeiD. Similarly, other brands like Converse (also owned by Nike) have recently launched their online customization platform {5}. Following Nike’s success, luxury brands like Burberry, which launched Burberry Bespoke, have adopted this same strategy to grow their “Direct to Consumer” sales and increase their margins. {6}

Conquer Disney World with a Flick of Your Wrist