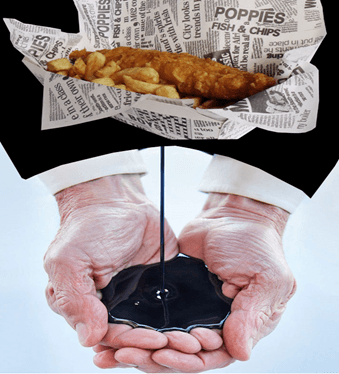 The world is busy discussing the carbon footprint of consumers in our homes, our transport and even our red meat consumption yet the global fishing industry, contributing 1.2% of global oil consumption annually2 , appears to have dodged the public eye.

The industry is dominated by nine Keystone Actors who collectively take 16% of global fishing catch and according to academic journal PLOS ONE “have a disproportionate influence on the health of the oceans”3. The 137 year old Maruha Nichiro of Japan (‘Mahura’) is one of these Keystone Actors4.

Mahura and its peers are currently fighting an environmental battle on the health of the world’s fish stocks yet the grave concerns around this sensitive matter have shielded them from a genuine discussion on the climate change impact stemming from the global seafood trade. In fact, in December 2016 Mahura and the other Keystone Actors signed into effect the “keystone dialogues” which amounted to a pledge of 10 goals on fishery sustainability and marine protection. This pledge is a step in the right direction yet fails to answer one pressing question:

“If, due to climate change and unsustainable fishing, nearly 90 percent of seafood species are over-fished4 then why isn’t the world’s largest fishing company investing in reducing its carbon footprint?”

Mahura’s results, website and investor publications give no indication of any R&D investment into Carbon Emissions, in fact there is no mention of it’s climate change policies at all5. Is this a case of big problems first (unsustainable fishing) and little problems second (climate change) or is this an insight into the lack of long-term thinking occuring in conference rooms around the world when it comes to climate change. Arguably, there can be no company with a greater climate threat to its future than Mahura yet there is no genuine investment in green technology.

The global seafood supply chain relies on 20th century technology to provide 20% of the worlds food4. The fleet, burning over 50 billion litres of fuel annually2, has not attempted to harness the renewable energy around it in the oceans, waves and wind. This global fleet, heading further from port every year to maintain its catch, have an enviable position working amongst the worlds strongest natural forces yet there is a neglible amount of renewable energy captured across the entire fleet.

This global fleet…have an enviable position working amongst the worlds strongest natural forces yet there is a neglible amount of renewable energy harvested across the entire fleet.

They could deploy Beluga Skysails, who have completed pilot tests to reduce fuel consumption by up to 20% of cargo ship fuel on trans-atlantic crossings6. They could harness wave power as was completed commercially in Hawaii in 20167 or even grow their wind and solar generation capabilities to enhance their propulsion and refrigeration systems renewable energy component8.

These technologies, relying only on R&D already performed by other industries, could make a marked difference in the carbon footprint of the global seafood supply chain. In fact, much like the carbon offsets and rebates on offer to onshore carbon reductions, the signalling effect is as critical to others in the chain as the initial carbon reduction. Mahura can take a leadership position in the entire global seafood industry by proactively harnessing the power of the seas.

But, can we really expect the global fishing fleet to go green in the face of already stressed fish stocks and squeezed margins? Are the established fishing fleets of the world the right actors to make this change or does the world need a ‘Tesla of the seas’ to see some movement? Does the UN have a bigger role to play in encouraging and facilitating carbon reduction at sea “where it is no single nations problem”?

And perhaps the most pressing question, are consumers ready to face up to their impact on the globe with each purchase? We give people enough nutritional information on the side of every meal to care about themselves, is it time we armed them with the same information to start caring about the planet?

(4) Khalamayzer, A. (2017) Will the world’s 9 biggest seafood companies help save the oceans? GreenBiz. https://www.greenbiz.com/article/will-worlds-9-biggest-seafood-companies-help-save-oceans

“Maintain the Pace”: Digital Disruption in the Aviation Maintenance Industry

Hanging Gardens of Healthcare or Tower of Babel?

Student comments on Never mind the calories, how much CO2 is in your meal?