As a kid growing up, the highlight of my weekend was going to Blockbuster and having the honor of choosing a film for my family’s weekly movie night. Blockbuster’s core business and operating model delivered value through operating conveniently located stores, maintaining a large selection of movies to choose from and optimizing prices to meet conditions of local markets. In the company’s dominant day, 70% of Americans lived less than a 10-minute drive away from a Blockbuster store.[1] Unfortunately, Blockbuster never altered its business or operating model as competitive forces around the company changed until it was too late. So who benefited from Blockbuster’s lack of action?

Enter: Netflix. In 1997 Netflix created a DVD subscription service to offer customers an alternative value proposition: Rent DVDs by mail. No due date. No late fees. Netflix delivered on this promise by operating a network of processing and distribution centers. Subscribers paid a monthly fee, set up a profile and created a list of movies they desired to watch. DVDs were sourced and mailed via the United State Postal Service when they reached the top of the queue. By 2006, Netflix had more than six million subscribers.[2] Although the company had much to celebrate, a digital transformation was taking place. The percentage of United States’ households with broadband connection was rapidly approaching 50%.[3] As the rise of the Internet and connectable devices commenced, how would Netflix alter its business and operating model to create and deliver value? 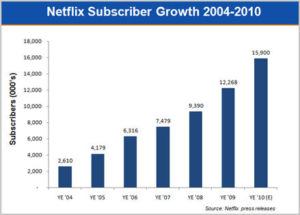 Netflix’s CEO Reed Hastings famously stated, “ Companies rarely die from moving too fast, and they frequently die from moving too slowly”. Taking his own advice, in 2007 Hastings tweaked Netflix’s business model to include video on demand (VOD). VOD allowed customers to stream media instantaneously on their computers, set-top boxes and mobile devise connected to the Internet. As a result, the company altered its operating model to not only source and distribute DVDs but also negotiate licensing contracts with movie studios and content providers. Subscribers had the best of both worlds, VOD streaming and DVD rentals. In 2011 the company announced it was decoupling its DVD and streaming service. Customers would have to decide to subscribe to either or both services. By 2012, it was evident that Hasting’s change to Netflix’s core business model was the right decision. 2012 4th quarter profits showed streaming profits on a path to overtake DVD rental profits.[4] 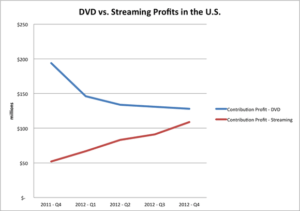 Clinging to his mantra that companies rarely die from moving to fast, Hastings is again addressing challenges that threat Netflix’s business and operating model due to digital transformation. For years, Netflix has provided content produced by mainstream and independent television makers. The price of acquiring content continues to rise as competitors enter the market, linear TV ratings fall and consumers move away from cable. Netflix is spending more than double on content acquisition than its two major rivals hulu and amazon.com spend. In 2015 content acquisition spending for each of these companies were, hulu – $1.5 billion, amazon.com – $1.7 billion and Netflix – $3.3 billion.[5] In effort to combat high content cost, Netflix has begun to integrate its supply chain vertically by producing in-house content. It’s first original series– a personal favorite– House of Cards was a major success and has resulted in the production of many more original titles. Netflix’s CFO David Wells recently commented that the company’s goal is to reach a 50% mix between its own content and licensed content from outside studios. Currently Netflix is about one-third to halfway of reaching its 50-50 target. [6] 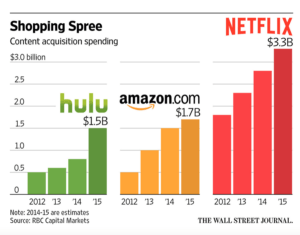 Up until this point, Netflix has done a tremendous job taking advantage of opportunities and addressing challenges digital disruption has presented; but what more should the company consider implementing to remain ahead?

If the past is a predictor of the future, I’m confident Netflix will continue to alter its business and operating model to address future digital transformations.  [798 Words]