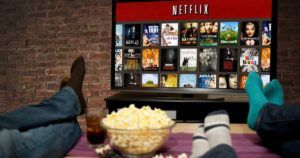 It’s hard to think of life before Netflix – tons of content right at our fingertips. Launched in 1997, Netflix started as a DVD rental business but quickly transitioned to subscription by 2000 (1). At the time, Netflix differentiated itself by providing consumers with an intuitive, online DVD library and no late fees. When the company introduced streaming in 2007, the on-demand nature of streaming, combined with no commitments, no contracts, no advertising, no-hassle sign up and cancellation, drove even more subscribers to the platform (2). While the impacts of digitization on Netflix’s business and operational models are numerous and nuanced, there are two main factors at the core of Netflix’s success which digital elevated to the next level: distribution and data. 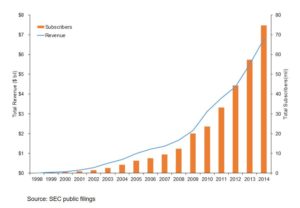 In the beginning, Netflix’s DVD business used a complex process to ensure timely delivery of DVDs to consumers. Bandwidth costs made streaming more expensive than mailing physical discs (2). DVDs, weighing about 1 oz per disc, cost 37 cents to ship via the US Postal Service (3). Operationally, Netflix had to manage the delivery and storage of millions of discs at 37 shipping centers around the country (4). To process returned DVDs, employees opened and scanned each red envelope DVD by hand, triggering a return notification email to the customer (4). The DVD was then logged back into inventory and reprocessed for the next customer with a cycle time of about a day. While employees handled the initial steps in the process flow, the majority of the sorting, storing, and selecting DVDs was mechanized, processing 3,200 DVDs per hour (5). Even though the DVD business jump started Netflix, Founder and CEO Reed Hastings knew the future was in digital streaming. Streaming provided several advantages over physical DVDs. Firstly, reducing the cost of physically storing, distributing, and maintaining a large library of physical discs. In 2005, Netflix had over 40 million individual DVDs in inventory with over 1 million in transit each day (4). Secondly, DVD obsolescence, whether due to physical degradation or non-returns, impacted the inventory if films. In 2002, Netflix managed the storage and delivery of 11,500 titles (2). In 2015, that number sat around 93,000 titles (6). Furthermore, old titles get significantly less play time than newer titles and sit for longer periods in storage. Thirdly, from a consumer standpoint, lead times for the delivery via the US Postal Service were long vs. the on-demand nature of streaming. Digital streaming eliminates these challenges and enables Netflix to re-deploy capital toward content acquisition and digital delivery costs.

The move to digital has armed Netflix with tremendous insight through data. Analytics and a nuanced understanding of the behavior of 70+ million subscribers worldwide have helped make Netflix’s innovation funnel more efficient – whether it be choosing which films to license or determining which original productions to greenlight. Netflix tracks where and when users pause, stop, rewind, repeat, or fast forward. Time of day, duration, and location of viewing sessions are also logged. Browsing, searching, and scrolling behavior are recorded (7). Now, before we cry NSA, let us remember that Netflix has stringent privacy policies and uses the data to provide recommendations for users. After all, 75% of what we watch on Netflix is based on algorithmic recommendations (7). Ultimately, understanding user preferences enables Netflix to facilitate content discovery. 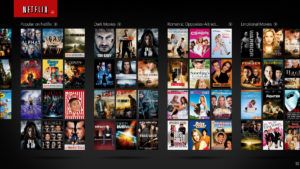 Data also gives Netflix an advantage when producing original content. In 2014, Netflix signed an exclusive 4 film deal with Adam Sandler after seeing that his movies were the most re-watched in the Netflix library (9). Similarly, Netflix commissioned the $5 million-per-episode show House of Cards after seeing 3 things: first, the British show House of Cards was very popular among subscribers; second, fans of British House of Cards were also avid viewers of films which starred actor Kevin Spacey or were directed by David Fincher; third, fans who watched David Fincher films watched the entire film in a single sitting rather than breaking off in the middle and watching something else (7). From the data, Netflix could take a calculated risk in creating House of Cards as we know it today.

In thinking about future steps, I believe Netflix must continue to push the boundary of digital entertainment and begin to think about interactivity and the user experience. Fundamental to viewing behavior and expectations of Gen Z and millennials is the ability to interact and experience the story on the screen. YouTube, for example, has led to a new way for creators and influencers to interact directly with their fans. The emphasis on present connection drives the popularity of Snapchat and Instagram. To capitalize on new viewing behavior, Netflix must go beyond merely collecting and drawing conclusions from data, toward a state of active involvement with users. (WC: 778)

No Personal Trainer? No Problem!

Student comments on Netflix and Chill? The Rise of a Tech Media Powerhouse