Nest created a modern version of the thermostat for personal homes. While it was not the first, Nest’s Learning Thermostat created consumer adoption through intuitive local controls, mobile access, and automation. This helped home cooling and heating save energy instead of just using energy. For example, Nest users can set an away mode or activate heat just before waking up. And Nest can adjust the temperature automatically based on weather conditions. Consumers and Nest share the burden as operators for Nests business model, so Nest’s role is eliminating consumer friction that has prevented adoption and continue automating decisions through learning.

Thermostats were invented in 1885, and in 1953 the iconic Honeywell “Round” was released. Programmability was added in the 1960’s but adoption has been slow and “programmable thermostats have largely fallen short” in terms of energy savings [6]. For U.S. households 97% had heating and 75% had cooling by 2005 controlled by thermostats. By 2008, heating and cooling comprised 42 of home energy consumption. Air conditioning is also the largest contributor to usage spikes after evening commutes.

Enter the Internet of Things

For decades, home appliances and other technology have only made incremental improvements in physical capabilities with minimal growth in smart components. Some even believe the quality of home appliances declined. Digital control panels, better sensors in stoves, emergency shutoffs in furnaces, and motion activated lights are a few examples of added smart components. But major innovations were few and far between. Modern kitchens might have appliances covered in new materials, but the overall function is still much like it was in the 1950’s. With the rise of ubiquitous and reliable home wireless networks and decreasing radio costs, connected devices from several companies are finally available for the home.

Nest’s primary business model improves the heating and cooling experience for consumers and reducing costs. To deliver on this promise, Nest provides users with an enhanced experience for setting the temperature in their home through automated decision making and mobile control in addition to the traditional method of local temperature control. Some of the elements had been available on programmable thermostats for decades, but Nest’s slick interface, machine learning, and transparency turned the idea into real savings. Nest’s users are a key piece of their operating model, and this is where past competitors failed to deliver. At the $250 price point, $131 average energy savings pays back in less than two-years plus additional subsidies in many areas. 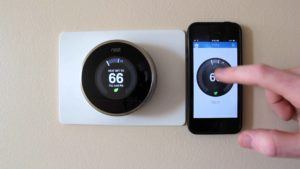 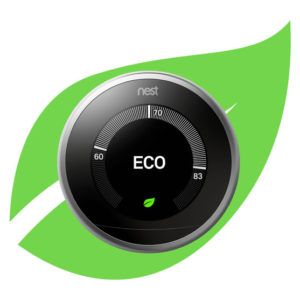 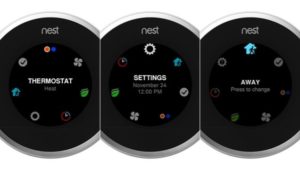 This is just the beginning though. Nest, acquired by Google in 2014, aims to be the center device in a fully connected home, acting as the Trojan Horse. Local enhancements such as connections to smart blinds and macroscale tuning of temperature to smooth power demand are going to continue to change the operating model for the home’s largest energy consumption task. Backwards compatibility with existing HVAC systems was also key, but too much openness going forward will make it easier for competitors to steal other parts of the future connected home. Other big players such as Honeywell, Amazon, or Apple and several small companies are all fighting to be at the center. 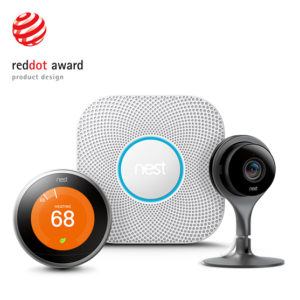 The acquisition was also not without challenges. There has been infighting reported and other products have either failed to launch or have not been well received. The Nest Protect smoke detector was initially shunned by the market when several questioned its effectiveness on the core capability of detecting smoke. Before digitizing home devices, Nest needs to ensure the performance meets or beats incumbents. Nest could capitalize on its team’s ability to deliver better implementations of smart components, but needs move quickly in such a crowded space. They need to resolve these organizational dynamics in order to deliver more successful smart devices to homes that capture the value created by connectivity and mobility.

In addition to eliminating friction when the user is needed for input, Nest should also continue automating the decision making for its users to improve the value captured by its devices. Their learning thermostat does this by remembering past usage or adjusting based on weather forecasts. Future product development needs to find these opportunities as well. For example, its smoke detectors could automatically notify neighbors or the fire department in the event of a fire. Ultimately users will only invest in these new technologies if they are better than incumbents and actually deliver the new value created.

Slacking – A new way to win?

How to become the next Leo Messi

Student comments on Nest Learning About More Than Just Thermostats