Munich RE, one of the largest re-insurers in the world, is already feeling the pressure of climate change. In fact, over Munich RE’s 136-year history, the global sea level has risen five and a half feet (1.7m)[1] and the five year rainfall average was more than 1.5 inches in 2011-2015 than it was in 1901-1905[2]. This combination of increased water levels and precipitation has and will continue to lead to increased flooding and subsequent property damage that Munich RE needs to appropriately factor into its actuarial tables in order to appropriately price their risk premiums. 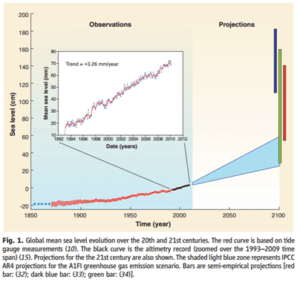 This vulnerability does not go unnoticed by the company. In its 2015 Annual Report, Munich RE singles out climate change as “one of the greatest long-term risks of change for the insurance industry. [3]” This worry is not unfounded as average global flood losses are expected to rise from their 2005 levels of roughly $6 billion per year, to $52 billion per year in 2050[4], a nearly nine-fold increase. Accurately pricing this increased damage will be paramount to Munich RE’s continued success. If they understate the risk, they may find themselves struggling for solvency. Over the past five years, Munich RE has a net profit margin of 8%, leaving it a slim buffer for absorbing increased claims expenses[5]. Unfortunately, the cost of our rising oceans is likely to be an ongoing problem. As the sea level continues to rise, the cost of each incremental inch increases[6].

Fortunately, Munich RE is not taking climate change lying down. In 2008, the company founded the Corporate Climate Center (CCC) whose mission is to accurately assess the risk posed by climate change to Munich RE’s business, develop risk transfer solutions for the company’s clients, as well as invest in projects that mitigate or slow the effects of climate change[7]. Through the Corporate Climate Center, Munich RE has taken an area that poses risk to their business and attempted to both mitigate its effects and develop revenue generating products and investments.

While the CCC is an excellent first step in mitigating the risk that climate change poses to its business, Munich RE could consider increasing its on-the-ground presence ahead of extreme weather events. Preparing a home, business, or vehicle for flooding or extreme weather events can severely decrease property damage incurred and government agencies such as FEMA or state officials are unable[8] [9] or unwilling[10] to respond. Providing emergency preparedness for areas in which they have outsized exposure could have a significant impact on the claims filed for the impacted areas.

Munich RE has done an excellent job at recognizing and rising to the challenge of climate change. The challenge will be to continue to evolve its understanding and the impacts the changing climate will have on its business and its customers. It’s inevitable that climate change will cause increased damage as precipitation levels continue to climb, extreme weather events become commonplace, and ocean levels continue to rise. How Munich RE reacts to these new challenges will define how this one century old company weathers its second.

The Unforeseen Cost of Fast Fashion

Student comments on Munich RE’s Risks Rise with our Oceans