As one of the largest re-insurers in the world with circa 43,000 employees across the globe and over EUR 50bn premium income in 2015[i], Munich Re has felt the repercussions of climate change on its business model. The company has managed built a solid basis for future business success by diversifying its business across property/casualty (P/C) vs. life/health (L/H) insurance markets, and several geographies (US, Europe, Asia). More importantly, however, Munich Re has become a thought leader in innovative risk modeling for natural catastrophes and product offerings on the P/C side of the business.

Re-insurance companies are affected by climate change, because of the increased probability of high impact natural catastrophes and thus increasing direct costs via higher damages. Pricing for re-insurance is heavily reliant on knowledge of these exact probabilities. Research suggests that climate change is shifting the probability distributions of natural catastrophes, such as hurricanes, blizzards, etc. to the right[ii], increasing the cost for re-insurers. However, data implies that probability distributions of disasters occurring are also getting more skewed[iii], i.e. showing fat tails, please see below[iv]. 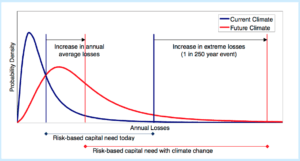 These developments make underwriting increasingly difficult for re-insurance companies. An easy example of the egregious impact of even the slightest change in weather patterns for hurricanes highlights the challenges climate change imposes on this industry: a change of 5-10% in wind speed during hurricane season will lead to damages amounting to roughly 0.13% of total US GDP[v]. Similarly, in a worst case scenario assuming a change in average temperature by 3-4 degrees Celsius, damages caused by natural catastrophes (e.g. flooding) would quadruple in the UK[vi]. Munich Re outlines its expectations for the average damage caused by several natural catastrophes[vii]:

Rising Value at Risk numbers have a direct impact on Solvency ratios imposed by regulators and thus on profit margins of the entire industry. For instance, a single Atlantic Hurricane disaster, as outlined above, would wipe out 20 % off the solvency ratio which as of 2015 stood at a comfortable 302%, please see exhibit below[viii]. This impact is more powerful than a 30% drop in equity capital markets and a negative FX effect of 20% combined which illustrates the dramatic impact of climate change on the re-insurance business model, as well as the need to innovation. 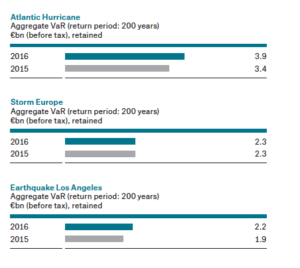 There are several levers to address this challenge:

NGOs, such as Ceres, have ranked Munich Re among the top 3 re-insurance companies[xi] in 2014regarding adherence to ESG criteria and it has received substantial external recognition for its continued efforts as a responsible investor and thought leader on climate change solutions.

In my opinion, Munich Re’s message to shareholders and customers alike would profit from an additional commitment on the product side: phasing out underwriting for carbon intensive industries. However, this sector continues to be profitable and Munich Re Syndicate Limited is actually one of the market leaders in the overall energy underwriting business[xii]. In my opinion, this conflicts with the overall message to shareholders. In its mission statement to customers and capital market participants alike, Munich Re puts carbon neutrality front and center in its business model[xiii].

In my opinion, the company will be truly able to claim this when phasing out oil and gas underwriting in addition to its other very successful climate change initiatives. (880 words)

Keeping Coca-Cola Hydrated: How climate change can affect water availability for the company

Student comments on Munich Re – mitigating risk in an uncertain climate