According to the EPA, “Carbon dioxide (“C02”) is the primary greenhouse gas that is contributing to recent climate change”. Trends show significant increases in C02 levels (see Figure 1) caused by human activities such as fossil fuel burning have increased Earth’s surface temperature1. As the Earth’s surface temperature has increased, many climate shifts such as dwindling ice cover, rising sea levels, ocean acidification, and weather extremes (see Figure 2) have occurred2. This has caused a dynamic across many industries where companies are looking for ways to either adapt to changing conditions or mitigate them (e.g. emissions reductions)3. For example, scarcity of water availability is threatening to reduce yields within agricultural production and increased surface temperatures have increased energy demand for business cooling solutions4. 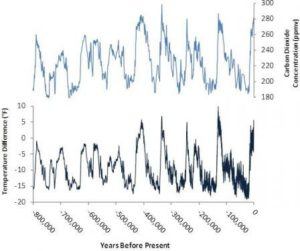 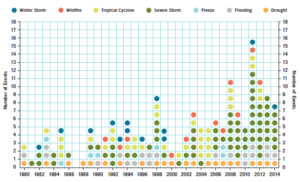 Recently, Morgan Stanley’s CEO, James Gorman, has seen an opportunity to use the company’s platform as a critical private capital provider to roll out initiatives that have begun to change the conversation. In November 2013, Morgan Stanley started the Institute for Sustainable Investing with a goal of reaching $10 billion in client assets invested for social and environmental impact within five years7. In addition, Morgan Stanley has been active in issuing and facilitating the issuance of so called “Green Bonds” that are used to fund environmentally beneficial projects. According to former Treasury Secretary Hank Paulson, the market for these securities has grown to $42 billion in 2015, up approximately 280% from 20148. A highly publicized example of a Green Bond occurred earlier this year when Apple raised a $1.5 billion to improve energy efficiency throughout their supply chain and innovate more sustainable materials into their products and processes9.

While Morgan Stanley and other businesses have made strides in creating opportunities for businesses focused on solving climate change issues and for investors focused on generating social profit as well as financial returns, there remains a large gap in funding for the projects necessary to shift us to a low-carbon infrastructure. Capital providers like Morgan Stanley as well as peer finance organizations will need to increasingly generate opportunities to match investors seeking to support environmentally friendly causes with those companies that can execute projects against those goals. In closing, I wanted to leave you with one question about the role of for-profit, private capital providers like Morgan Stanley. Does Morgan Stanley not only have a responsibility to create programs like the Institute for Sustainable Investment but also to self-select out of traditionally profitable parts of its business that help fund projects that work against solving climate change issues?