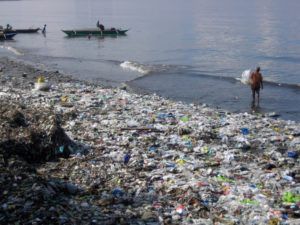 Did you know that scientists are estimating that by 2050, there will be more plastic than fish in the worlds’ oceans? According to a report created by the World Economic Forum, worldwide plastic use has increased 20 times in the past 50 years and is expected to double in the next 20 years. Making this plastic comes at a cost and plays a major role in climate change, as plastic production represents 6% of global oil consumption and 1 percent of the global carbon budget (and these numbers are expected to increase in the next 30 years!). Furthermore, we do a terrible job of reusing and disposing of this plastic.  The report states that more than 70 percent of plastic produced is either put in a landfill or improperly enters the world’s waterways and infrastructure through littering.1

France decided to take a stance against the “plastic problem” by passing the Energy Transition for Green Growth Act, which banned disposable plastic bags in July 2016.  Surprisingly, the country took the law a step further by banning the use and production plastic plates, cups, and utensils by 2020.2 Once in effect, the law will only allow disposable goods that are compostable at home and are made from 50% biologically-sourced materials. 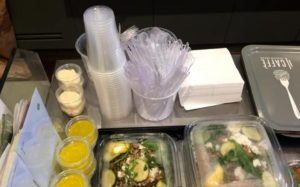 Pack2Go Europe, a Brussels-based company that represents the continent’s packaging manufacturers, is challenging this new regulation by urging the European Commission to take legal action against France.  They believe that the ban violates the EU law on the movement of goods. This ban forces their producers to innovate completely new products and would effectively kill their business as is. Pack2Go believes that a technology for tableware that can be composted domestically and meets the critical food hygiene standards does not currently exist.3

While I think France’s effort to combat climate change is exemplary, I’m not sure that the best way to do so is by starting with the to-go forks, knives, and containers at fast food chains.  Pack2Go’s website focuses on the benefits of plastic packaging and one-time use cups and cutlery as necessary for food hygiene and safety.4 This can be seen by their promotional video linked above. Rather than focus on plastic production, they petition European governments to refocus their attention on litter prevention in order to increase recycling and help people contribute to a circular economy.  I agree with their recommendations as single-use containers and disposable items are becoming increasingly important as our lifestyles change to be more on-the-go.  If plastic can no longer be used to create these items, how can we be so sure that their replacements will actually be less harmful for climate change and the environment?  Additionally, low-income families rely on plastic utensils and plates, and their replacement with a more expensive eco-friendly item will greatly hurt this population.2

The move away from plastic can be seen world-wide as many cities in the US and countries across the world have banned plastic bags and increased incentives for customers to look for alternative products. In light of these regulations, innovative companies have begun to develop out of the box alternatives to plastic products.  Bakey’s in India, for example, has created edible bio-degradable cutlery made from millet, rice, and wheat flours, that has a shelf life of three years.5 A number of US-based companies, such as World Centric and Fabri-kal, are developing plant-based, compostable cutlery and packaging solutions to contribute to a greener economy; however, these items do not comply with France’s new law that states the items must be compostable at home.6 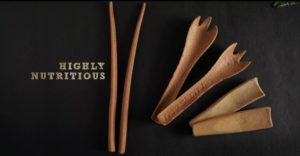 While the world has had some success innovating in the plastic-alternative tableware space, production is not advanced enough to meet the demands of France’s new ban.  Rather than ban these plastic products, the country should incentivize companies like Pack2Go to develop new eco-friendly products that meet these stringent requirements. France has gone too far by banning plastic cutlery which makes me wonder, what’s next?  Will all plastic bottles be banned? If so, how will bottling companies with major bargaining power, like Coca Cola, be able to sustain their business? Pack2Go is facing an enormous problem right now and needs to start developing more sustainable products before their business is replaced by others.

Delta Airlines – The airline industry getting away with highway robbery

Student comments on More Plastic Than Fish in the Sea? A Big Problem for Pack2Go