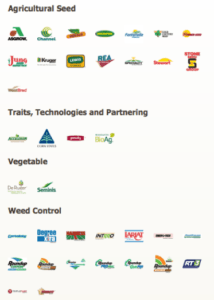 uctivity segment makes herbicides for various end-users. Examples of the company’s products can be seen in the visual on the right1.  Monsanto, whose history dates back to 1901, is one of the largest suppliers to the food industry with $13.5 billion in revenue in Fiscal Year 2016.  Given their strong market position and emphasis on genetically modified seeds, Monsanto has been a source of much controversy in government affairs, the agricultural landscape, and the public as a whole.

Agriculture and the Environment

Global warming will have a significant impact on many aspects in the agriculture ecosystem.  While some of the current varieties of crops may thrive in a changing climate, others may be much less successful, leaving producers with no choice but to develop crops more rsistant to rising temperatures and changing rainfall patterns.  Global warming has been a leading motivator for GMOs as producers try to leverage genetic traits from outside resources to create certain new, climate-resistant varieties of crops.  However, without public intervention, it seems that the research into GMOs will not reach optimal levels as companies can only profit during their proprietary research process.  This inherent problem has led to the conclusion “among both public and private-sector institutions that the public sector has an important role to play in crucial stages of crop genetic conservation and improvement if the best results for society as a whole are to be achieved.”2  While the agriculture industry is being impacted by climate change, they are also one of the main culprits, with “24% of global Greenhouse Gas emissions from deforestation ad agricultural emissions from livestock, soil, and nutrient management.“3 The graph below displays a breakdown of projected U.S. Greenhouse Gas emissions from agriculture.4 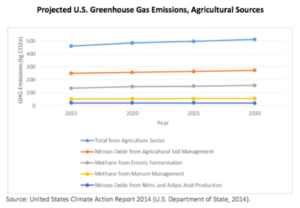 Monsanto has taken many steps to get out in front of the impacts of global warming.  The company has produced hybrid seeds that can adapt to a wider range of climates and drought levels. They have also done analysis on nitrogen use (one of the main greenhouse gases com ing from agriculture as shown above) which they are attempting to bring down over time.  David Fischhoff, technology strategy and development lead for Monsanto, explains that “Monsanto’s nitrogen-use trait should help maintain high grain yield at lower nitrogen levels and could contribute to a significant reduction of agricultural gr 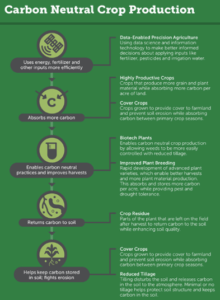 eenhouse gas emissions.”5  Monsanto offers vast resources to their farmers to encourage the use of best practices for crop management that will reduce negative impact on the climate. Most recently, “in December 2015, Monsanto announced a first-of-it-kind program to introduce a model for carbon neutral crop production that will help reduce the carbon footprint of crop production.”  See the visual on the right for a full summary of the production plan.6

There are three main steps that Monsanto can take to assure their own future corporate success and to help the planet fight off global warming: reduce their emissions (particularly in nitrogen), researching crops that can endure a new climate, and help farmers incorporate more green-friendly best practices.