While many airlines operate at an astonishing nine sigma safety level, the threats of mother nature remain outside their control. Aviation currently accounts for only 2% of global carbon emissions, but it is expected to be the fastest-growing transport mode over the next three decades.2 Because jetliners must sustain flight for prolonged periods of time, are incredibly weight sensitive, and fly in low-temperature conditions, jet fuels must contain high energy density (i.e. energy content per unit volume or mass) and observe low freezing points. Current technologies are unable to achieve these specifications through renewable energy sources.3 Nevertheless, Boeing, a leading global aerospace company, has achieved some success in reducing its carbon footprint.

As climate change becomes top of mind for more people around the world, companies will look to make their business practices more sustainable. Today, airlines enjoy major cost savings as oil prices remain suppressed. However, in the decades to come, they will ultimately feel pressure to reduce their reliance on fossil fuel derivatives.2 Due to the long lead times in R&D, aircraft manufacturers need to apply greater focus on this issue now to be prepared for future demand. Boeing is well-positioned to lead this charge. It acknowledges that changing weather patterns and extreme weather can dramatically affect aviation safety. It further recognizes the environmental impact of climate change not only on its home state of Washington, which is known for its vibrant and diverse ecosystems, but also around the world.4

In 2011, Boeing delivered its first 787 Dreamliner, a first-of-its-kind carbon fiber aircraft. Because carbon fiber is significantly lighter than aluminum, which comprises 80% of traditional aircraft,5 the 787 realizes a whopping 20% increase in fuel efficiency compared to similarly sized planes.6

Boeing is investing in renewable fuel cell technologies which will initially be used to power internal systems, like lighting and multimedia. Later, fuel cells could be used to power auxiliary functions as well, such as wing flaps.4 Significant research is still required before fuel cells have the energy density and output capacity to power entire planes.7 Boeing is also tinkering with moon-shot projects like alumina-silicate composites capable of sequestering carbon dioxide. Applications of this technology wouldn’t directly reduce carbon emissions for planes, but could reduce net carbon emission for the company.

Aggregate hazardous waste, GHG emissions, landfill waste, & water intake for Boeing production facilities have all fallen since 2012 (see Figure 1). The US EPA awarded Boeing the 2016 Energy Star Partner of the Year Award for their sustained excellence in environmental initiatives. 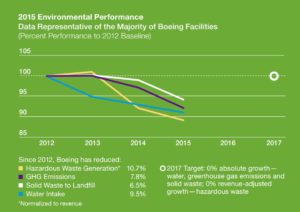 I believe Boeing can go further in showing its commitment to sustainability and reducing its carbon footprint.

The sustainability of our world is the responsibility of everyone on Earth. Due to the long lead time of R&D, it is imperative that we think about these issues while they can still be stopped. The aviation industry can only be a small part of the solution. Ultimately, the entire world will need to reconsider the way it consumes energy.

Tesla’s Quest for a Sustainable Future: Acquisition of Solar City