Global demand for chocolate has been rising steadily, in part due to increasing demand from emerging markets. The global chocolate market rose 13 percent from 2010 hit $101 billion in sales in 2015.[1] But climate change is threatening the world’s supply of chocolate, leading to projections supply will soon be unable to meet chocolate demand.

One company is already on a mission to save chocolate – Mars Inc., a $33B company food and candy manufacturer (it produces snickers, M&Ms, and more). As the worldwide largest candy producer, and one of the world’s largest purchasers of cocoa, it’s particularly concerned about climate change. The cacao tree only grows in certain temperatures and is very sensitive to natural fluctuations – it is estimated that only 10% of the world’s potential cocoa production is realized each year. All of the cocoa produced in the world is grown within 20 degrees of the equator, with 70% from West Africa alone.  However, rising temperatures and unpredictable rainfall patterns will dramatically change where coca can be farmed. Some areas in West Africa will become completely unsuitable for cocoa by 2030, while others will only remain suitable after farmer adaptation.[2]

Not only is climate change threatening Mars’ supply chain, but it already affecting its bottom line. Cocoa demand has already started to outpace cocoa supply, sending cocoa prices up significantly over the past 15 years.[3] 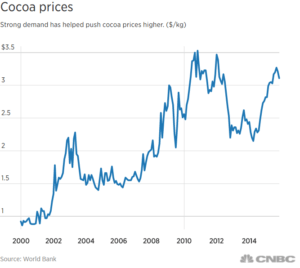 Mars has undertaken significant steps in response to the threat of climate change. First, Mars has taken a considerable interest in protecting its farmers, who face the losses of their livelihoods due to climate change. Mars partnered with other major industry players like Nestle and Hershey to form CocoaAction, which helps farmers learn and implement sustainable farming practices while also providing better cocoa trees, fertilizer and training.[4] Mars also committed to buying 100% of its cocoa from certified sustainable farmers by 2020.[5]

Mars is also focused on reducing its own contributions to climate change. In 2015 Mars cut its  greenhouse gas (GHG) emissions by 25% and has pledged to eliminate all GHG emissions from its operations by 2040. To achieve this reduction, Mars has instituted a number of energy saving initiatives worldwide, including a sizable investment in a wind farm in Texas to generate 100% of the electricity it uses in the US. The U.S Environmental Protection Agency (EPA) ranked Mars as the 6th largest user of green power in the US in 2015. [6]

To manage existing weather and climate change impacts, Mars employs meteorologists who study weather patterns that may impact Mars’ supply chain, and use their research to help Mars adapt its supply chain and sourcing to events like storms if needed.[7]

Though Mars’s renewable energy use and farmer assistance is incredibly beneficial, it should also increase its partnerships with the scientific community to focus on cacao trees and beans directly. Mars has done some scientific investment through its launch the Cacao Genome Project in 2008, through which it released the genome free online so that breeders could identify traits of climate change adaptability[8]. However, to make cacao trees more resilient, Mars should increase its investments in scientific research to create greater genetic diversity among trees. For example, scientists developed a new strain of cacao tree, CCN51, that is resistant to disease and produces seven times more beans than a traditional tree. However, the strain is virtually unusable as its flavor profile is far inferior to traditional cocoa.[9] Mars should invest in scientific efforts to work on creating cacao tree strains that are adaptable to climate change while maintaining their original flavor profiles.

In addition to scientific investments, Mars should leverage its previous success in uniting private and public players to assist other companies in adopting its green energy initiatives. Even if Mars achieves its goal of carbon neutrality by 2040, its efforts will not be enough to offset increased energy consumption by the rest of the world. Mars should provide free training and resources to companies in other industries to encourage them to reduce their GHG emissions. Together with the support of public governments, the scientific community, and other private industries, Mars has the power to save chocolate from climate change.

Aviva – How to insure against the ultimate risk?