“We welcome the tremendous responsibility as the world’s largest hotel company to be a good global steward.” –Bill Marriott, Founder and Chairman of the Board 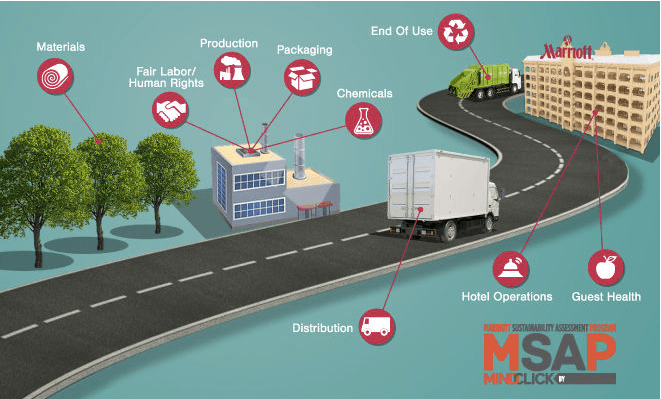 It’s March 25, 2016 and Bill Marriott, Founder and Chairman of the Board of Marriott International, has just received a phone call from his CEO, Arne Sorenson. “The deal is done. We are now the largest hotel company in the world,” Sorenson proclaims. To which Marriott replies, “Let’s get to work!” Part of that work will be integrating a corporate sustainability plan that has been in the works since 2007. Encouraged by public and private organizations, investors, and customers, Marriott has established itself as a champion of change when it comes to climate change.[i]

The Marriott/Starwood merger of 2016 formed the largest hotel company in the world. With 5,700 properties, 1.1 million rooms, 30 brands, in 110 countries, Marriott International is one of the world’s largest controllers of real property, managing an estimated $363 billion of real estate world wide. Buildings alone responsible for 6.4% of direct GHG emissions and 12% of indirect CO2 emissions worldwide.[ii] As one of the largest managers of real estate in the world, Marriott is in a position to have a significant impact on the world’s climate change problem.

Government treaties and public policy have motivated Marriott’s climate change initiative. The Koyoto Protocol, a global treaty agreed to in 1997, served as a global baseline for mitigation of greenhouse gas emissions across the world.[iii] Four years later, President Barack Obama issued the American Clean Energy and Security Act.ii The bill, a variant of an emissions trading plan like that adopted by the EU, was approved by the House of Representatives but was never approved by the Senate.ii

Non-Governmental Organizations (NGO’s), particularly Carbon Disclosure Project (CDP), play a major part in Marriott’s sustainability mission. Marriott engaged CDP to help it calculate an annual rating based on sustainability metrics including carbon emissions.viii The rating, which sits alongside its stock ticker on Google and Bloomberg terminals, is used by many investment companies, including BlackRock, to evaluate risks and mitigation of risks related to climate change.viii The company is also required by large customers to provide significant amounts of data including the carbon footprint of their hotel stays to the impact of the meetings they hold at the hotel.viii

Marriott is also motivated to receive awards and recognitions as a top-ranked company to work for. For example, Forbes requires the company to provide a CDP sustainability rating to receive its “100 Best Companies to Work For” award.ii Deborah Marriott, a member of the Board of Directors at Marriott International stated, “It is imperative that we focus on our sustainability efforts in order to make it on these lists year after year.”

In 2007, the company began to institute new initiatives to help achieve its goals. Marriott installed motion sensor lights and fluorescent light bulbs to help save on energy. It began offering guests rewards points for skipping housekeeping services and encouraged guests to use their bath towels more than once,  drastically cutting down on laundry.  Installation of 400,000 new environmentally friendly shower-heads and toilets has also helped contribute to the decrease in water consumption.[iv] There are further plans to retrofit older buildings to be more energy efficient, install electric car parking stations,  and encourage owners to construct LEED certified buildings[v][vi].

A compelling indication that Marriott leadership is seeking transformational change to reduce its impact on climate change is its monetary bonus structure for employees with direct control over the performance of these initiatives. The Corporate Executive Team, VP’s of Engineering, Energy Managers, Environmental/Sustainability Mangers, Public Affairs Managers, and Facility Managers, are all offered monetary bonuses based on performance[vii]. 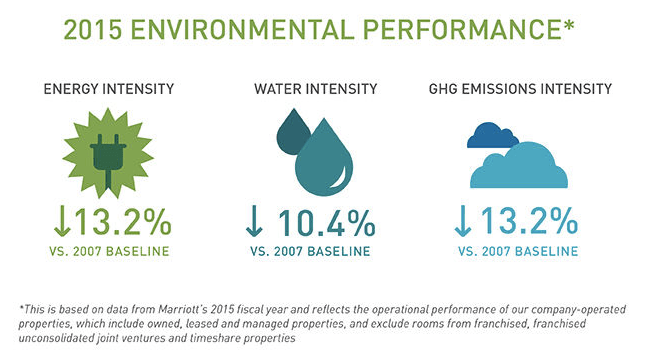 In less than ten years, Marriott International has successfully cut its energy and water consumption by 13.2% and 10.4% respectively.i This has resulted in a 13.2% decrease in the company’s total GHG Emissions- approaching its 2020 goal of a 20% decrease in global emissions[viii].  Marriott will continue to put forth new initiatives as it leads the travel and tourism industry in the fight against climate change.

As the behemoth takes its seat on the throne as the largest hotel company in the world, there is no reason why it must have any sustainability program at all. The company’s size gives it the ability to dictate the rules to its customers, investors, and private organizations like Forbes. Instead, Marriott has fully committed to a strong sustainability program, with a goal to do everything in its power to reduce its carbon footprint. All of which is an effort to truly become, as Mr. Marriott stated himself, “a good global steward.”i

[i] Marriott, Deborah (Member of the Board of Directors, Marriott). Personal Interview. 31 October 2016.

Student comments on MARRIOTT INTERNATIONAL: NO RESERVATIONS ABOUT CLIMATE CHANGE