In their mission to create and share knowledge (See Chart 1 for the example of Oxford1,2), universities have long relied on international cooperation and funding. UK universities receive £1.2 billion a year from the European Union (EU)3, but also welcome 127,000 EU students4 and maintain a close partnership with the European research community3. Following the Brexit vote, applications from EU students have already dropped by 7%5 in the UK and researchers are being concerned about cross-border collaboration. Oxford, the oldest university of the English-speaking world is also receiving negative signals with researchers being rejected from EU projects due to Brexit-related funding fears6 and student applications droppings7.

The university has, over time, established a strong leadership in both research and academics. It has created value by fostering intellectual excellence and by drawing from global talents. An increasing distance to the EU could mean three things to the university’s value chain. First, the £66 million of European research funding it receives every year8 could be in jeopardy. Second, EU researchers and faculty, who currently make up 17% of its staff9, could be tempted to leave due to unfavorable prospects. Third, European students may not favor UK universities due to visa and employment concerns. If Oxford were to lose its capacity to attract the best and brightest, the special place it has in the academic world could be in peril. 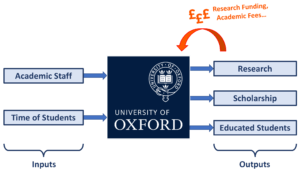 Oxford quickly reacted to the vote by creating a communication channel to keep the community informed and reassured. The message was two-fold: there are no immediate consequences to students and faculty, and the funding received via the Horizon 2020 project (biggest Research and Innovation project in the history of the EU) is, for now, not affected by Brexit11. The university then crafted a short-term strategy to anticipate the consequences of the vote on the three pillars of its value chain.

In order to maintain a sufficient level of funding, Oxford joined other educational institutions to pressure the government to take actions such as making the UK an associate country of the EU research space12. The university obtained some guarantees from the UK Treasury to match EU funding wherever this funding is discontinued, for at least some period of time13.

Forecasting a drop in applications from European students, the university decided to refocus on non-EU international students (in particular Americans and Canadians)14. Those students used to be at a disadvantage with higher tuitions and more complex administrative processes. Oxford is hopeful that there is untapped potential outside of Europe.

Oxford’s priority is to ensure that its staff is confident it has a place in the UK. The Vice-Chancellor strengthened the importance of diversity and external contribution. Migration lawyers and pension experts were appointed to address possible concerns15.

Establishing a medium-term strategy depends on the outcome of the UK-EU negotiation. Preparing for the worst, Oxford has been considering opening a campus in France16. Beside solving the funding and staffing issues, this move could also be symbolic: Education and Innovation transcend borders, regardless of the political situation17.

I believe that two types of actions could be put in place to mitigate the risks of Brexit and possible future political events. On the one hand, the university should take actions to maintain its international aura. Those could include:

On the other hand, domestic-centered projects could be carried out to make the institution more independent. For example:

The dilemma Oxford currently faces reflects the (remediable) failure of our society to adapt to a changing world. If the academic elite is so convinced of the benefits of international cooperation, why is more than half of the UK population tempted by isolationism?

Also, research funding comes from taxpayer money of specific countries. However, research findings are universal. How can academic institutions reconcile those two aspects?

8: Oxford University, “Oxford and the EU”, https://www.ox.ac.uk/about/international-oxford/oxfords-global-links/europe/oxford-and-eu?wssl=1 accessed on November 2017

10: “The Lord is my Light” – Oxford University’s Motto

Don’t mess with Dallas: How the city of Dallas is tackling climate change

Student comments on Make Oxford Great Again: An Elite University in the Era of Protectionism