Global winter sport industry is a $70b market [1]. This industry, which heavily relies on ski tourism, and hence on snowfall levels, is hit by climate change even more violently than any other industry. In the French Alps, by 2005, temperatures had increased three times the global average [2]. A good example of the critical impact of global warming on the ski industry can be found in Vallée de Chamonix – Montblanc, a major ski resort located in the French Alps.

With 2,5M visitors per year, 116 km of slopes, and the highest mount in Europe (Mont blanc, 4,810m), Vallée de Chamonix – Montblanc is a major ski resort and tourist destination in France [3]. However, since several years, the domain is severely hit by the effects of global warming. In the late 19th century, the average temperature in Chamonix was 9,6°C. Today, the average is around 10,8°C [8]. As a result, snow often arrives later in the year, does not stay as long as before, and is of a decreased quality. In 2015, 42% of Chamonix’s 507 ski runs were closed during the holidays [2].

To mitigate temperature’s increase and its impact on snowfall and tourism, Vallée de Chamonix – Montblanc has launched a series of initiatives, and could go even further by following the examples of other ski resorts.

No snow? Let’s make it ourselves!

Thanks to snowmaking installations, it has been partly possible to cope with the problem posed by the shortened ski season due to the lack of natural snow.

Chamonix was one of the first French ski domains to install snow canons. Between 2002 and 2014, Chamonix has invested 7,3M€, i.e. 0,8% of its 2014 revenue, in new snowmaking equipment [5]. Technology has improved to make it more environment friendly, thanks to the use of compressed air instead of chemical products to freeze water. But the cost of this technology is high: 1m3 would cost between 3 and 5€ (including amortization, energy and personnel cost), and the average investment is 650 000€ per each km of ski run. Besides, snow-making equipment consumes water and energy, further contributing to global warming [6].

Other technologies exist in other stations, that Chamonix could also explore. For example, Davos, in Switzerland, is experimenting snow farming technique, which consists in installing snow fences to create drifts and collect more snow than would otherwise naturally occur. Other domains like the Rhone glacier in Switzerland, wrap their glaciers in insulating blankets. 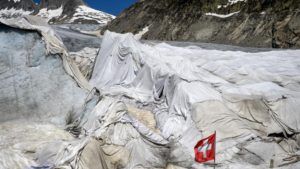 A Swiss flag floats on the Rhone Glacier which has been covered with insulating foam to be protected from the sun on July 14, 2015 near Gletsch, Switzerland. (FABRICE COFFRINI/AFP/Getty Images)

However, all these initiatives are only short-term solutions, and won’t allow Chamonix to fight long-term global warming effects. To do that, the resort needs to deeply rethink its entire model.

No snow? There is a whole lot more to life than skiing!

To continue to attract tourists even when snow falls do not allow skiing, most stations, including Chamonix, have tried to diversify the activities they offer to visitors, to become less dependent from snow conditions, and become a “4 seasons destination”. In Chamonix, this includes offering scenic tours to view Mont Blanc, Western Europe’s highest mountain, ice skating, swimming-pool, all included in the unlimited ski pass, allowing to increase the sales of these passes by 15% despite declining levels of snow [2].

However, the attractiveness of these activities is seriously threatened by the competition of other sunny destinations, now easily reachable by plane.

No snow? Let’s fight the root cause: global warming itself!

The ultimate long-term solution for ski resorts is to fight temperature increases, by implementing environmentally-friendly initiatives, to minimize the environmental impact and improve tourists’ awareness. On this side Chamonix is a precursor.

In 2010, Chamonix launched the Climate and Energy action plan, the first in the French Alps. It is committed to reducing greenhouse gas emissions in the area by 22% by 2020. The measures do not include only the ski activity, but also transport, urbanism and waste management measures [7].

In 2011, Chamonix was part of the 4 mountain resorts in the French Alps which launched the “Flocon Vert” (Green flake) label, which aims at being a tool for the sustainable development of mountain resorts, with a specific focus on winter destinations. To join this label, candidates have to respect a number of transport, planning, energy, water, social and territory criteria [6].

The future of skiing in Chamonix is compromised, but the city can rely on its natural assets and large financial capabilities to cope with global warming effects on the short term. Lower stations with less financial means could however not have the same chance, and their future is much more compromised. According to OECD, within 15 years, 25% of the region’s ski areas will be unable to offer reliable skiing conditions, and by 2050 the number will rise to almost 40% [4]. Like Chamonix, ski resorts need to take strong initiatives to fight climate change impact.

[1] The Guardian, Why snow machines are cold comfort as the Alps warm, Friday 7 November 2014

Hershey’s Chocolate: Has Climate Change Made It Bittersweet?