Global warming is expected to have significant and widespread effects across the climates and ecosystems of the planet. Accounting for over 70 percent of the Earth’s surface, perhaps no environment will be more affected than Earth’s oceans. Oceans play a vital role in the international economy with over 90% of world trade occurring through maritime transport[1].  Unfortunately, international shipping contributes to nearly 3% of the world’s greenhouse gas emissions and that impact is expected to rise to 17% by 2050[2]. Maersk, the world leader in maritime transport, is taking a leading role in mitigating the threat of global warming as well as preparing its supply chain for the dynamic future. As a responsible corporate citizen of the world, Maersk needs to continue to progress change internally and across the shipping industry while simultaneously preparing to take advantage of the changing conditions in the world’s oceans. 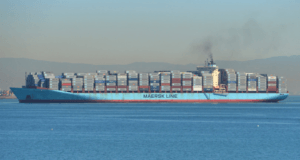 Global warming presents immense challenges and risks to Maersk’s worldwide operations.  Rising sea levels and increased water temperatures are expected to have significant impacts on maritime shipping lanes and infrastructure. Changes to water height around the world will demand changes to port infrastructure and railways while changing the water composition and navigation routes worldwide[3].  Rising water temperatures will increasingly abet hurricanes that poise significant risks to port infrastructure and ship safety during many months of the year[4]. 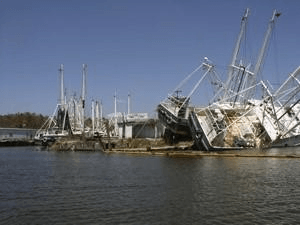 Hurricane Katrina had devastating effects on many ports in the Gulf Coast. Source: www.epa.gov

Paradoxically, rising sea levels and the melting of polar ice caps could enable greater accessibility for larger transport ships and open new passageways for Maersk to include the Northwest Passage. Studies estimate that by 2050, regular ships will be capable of navigating shipping lanes that are currently frozen year-round[5].A shipping lane through the Northwest Passage could potentially decrease the length of some Maersk routes by up to 50%[6].  These environmental changes will present an unique situation for Maersk in the future as shorter distances will increase profitability while decreasing global carbon output as much as 40%[7]. 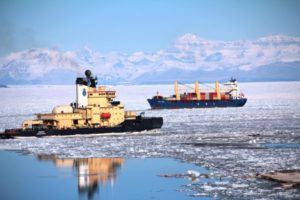 Artic Shipping Could Be A Major Change to Global Trade. Source: www.bluetraker.com

Maersk has thus far taken proactive measures to combat the effects of climate change. Internally, Maersk has begun implementing navigation techniques such as “slow steaming” to increase fuel efficiency and decrease emissions by up to 27%[8]. They are retrofitting significant portions of their shipping lines and infrastructure to further reduce environmental impact of their supply chain. Furthermore, in 2011 Maersk began developing the largest class of ship in the world called the “Triple-E” which reduces emissions by as much as 50% per container moved[9]. Maersk expects to operate over 20 Triple E ships by the end of 2018[10]. 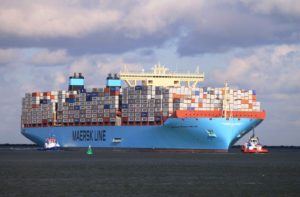 Externally, Maersk has taken an industry leading role in combating climate change.  In 2014, it implemented the “Maersk Carbon Pact Challenge” which teams with other supply chain organizations and businesses to reduce emissions throughout the industry[11]. Furthermore, Maersk lobbied the industry governing body, the UN International Maritime Organisation (IMO), to regulate greenhouse gas emissions across the industry, ultimately achieving landmark regulations in July of 2017 despite significant roadblocks for many years[12].

As the effects of climate change become more pronounced and accelerated in the future, Maersk must continue providing industry leading reforms, external support, and civil engagement while maximizing opportunities presented by the changing environment. Maersk should expand its practices of slow steaming, utilizing larger ships, and retrofitting existing infrastructure while lobbying IMO to enforce these practices industry-wide. Similarly, Maersk should lobby IMO to enact a cap and trade style law that would further incentive emission reduction while enabling Maersk to take advantage of first-mover efficiencies[13]. As climate change shifts population densities and farmland worldwide, Maersk should continually evaluate its shipping lanes and ports of embarkation and debarkation. In the medium to long term, Maersk should seek to pioneer new routes through the Northwest Passage as it presents an opportunity to increase efficiency in both operating costs and environmental impact.

Moving forward, concerned citizens of the world need to question whether the call to action for change should arise from international corporations or our international governing bodies or does it not matter? Does allowing corporations to strongly influence global regulations for their own benefit present an allowable ethical dilemma in the case of Maersk?  Ultimately how should the negative externalities of global trade be accounted for in a global supply chain that benefits and hurts everyone?

[2] Adler, Ben. 2017. “Shipping Is A Big Contributor To Climate Change. So Why Is It Being Left Out Of The Paris Deal?”. Grist. http://grist.org/climate-energy/shipping-is-a-big-contributor-to-climate-change-so-why-is-it-being-left-out-of-the-paris-deal/, accessed November 2017.

Hunting in the Zoo: How Boeing’s plead for protectionism handed Airbus a spectacular opportunity to strike back

Walmart and Block Chain: It Takes Two to Mango