A steady decline in summer arctic sea ice over the past three decades (Figure 1) has opened up a new opportunity for maritime shipping companies to shorten their routes from Asia to Northern Europe. This route, known as the Northeast Passage, reduces the distance travelled by 30%, cutting fuel and other shipping costs for carriers [1]. Seventy-one cargo ships made the trip during the summer of 2013, up from only four in 2010. Despite the recent increase, these figures are still far less than the 17,000 trips made through the Suez Canal annually. Even if this arctic shipping lane remains a minor portion of total trade in the near-term, Maersk Line – the world’s largest container shipping company [2] – has already begun to manage the implications of climate change on their operations.

80 percent of global trade by volume is transported by sea and handled by ports worldwide [3]. Given the close link between trade and macroeconomic growth, maritime shipping volume closely correlates with GDP growth. However, over the past several decades global shipping volumes have increased at a rate roughly twice that of global GDP growth due to the effects of globalization [4]. This staggering growth requires a massive fleet of diesel-fueled cargo ships that contribute to 2-3% of global CO2 emissions, nearly twice as much as the airline industry [5].

Maersk Line has already begun to grapple with climate change, most notably in their goal to reduce GHG emissions per container in their 611-ship fleet 60% by 2020 relative to 2007 [6]. To this end, Maersk christened a new class of ships in 2013 known as the “Triple E” (Figure 2), which stands for “economy of scale, energy efficient, and environmentally improved” [7]. The design cuts emissions through a combination of size and design advances that reduce the overall per unit environmental impact of cargo transport, winning Maersk “Sustainable Ship Operator of the Year” in 2011 [8]. At the time, these were the largest container ships in the world but have since been surpassed by even bigger variants. However, given the 20-30 year lifespan for a typical vessel, rapidly replacing the entire fleet is not economically feasible. To supplement new builds, Maersk is investing over $1 billion to retrofit their existing fleet with more fuel efficient engines and other technological upgrades, such as enhanced propellers and bulbous bows [9]. 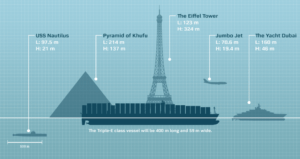 Maersk is also relying on other less investment intensive emissions reduction tactics to meet their aggressive 60% reduction goal. “Slow steaming” is an operational strategy that means running ships at less than their maximum speed, which can reduce emissions and fuel costs [10]. Recent increases in computing horsepower and the widespread adoption of GPS have also spawned route optimization efforts using Big Data. In 2014, these purely digital efforts resulted in an emissions reduction of 125,000 tons of CO2 [9]. Together, these strategies have resulting in a relative emissions reduction of over 40% for Maersk, which is 10% ahead of competitors based on benchmark studies [9].

Impacts in the Future

Despite Maersk’s current efforts to reduce emissions, a realistic assessment of climate change evidence suggests that even with globally coordinated efforts to reduce carbon emissions it is unlikely humanity will be able to prevent a global mean temperature increase of 2-4°C over the course of the 21st century [11]. As a result, Maersk will face new operating challenges from the impacts of climate change. Ports will be impacted by rising sea levels and require significant investment to remain functional [12]. The required upgrade costs will be partially passed on to Maersk in the form of higher berthing and other port-related fees. While no model can accurately predict the impact of climate change on specific weather systems, changes in metocean conditions along major trade routes could add uncertainty and cost in the future. In the most extreme climate change scenarios, trade pattern changes due to human migration and agricultural shifts could add variability to Maersk’s operations.

Even if a global regulatory framework is adopted that applies a cost to carbon sufficiently high to prevent a 2°C impact (e.g. carbon tax, cap and trade), Maersk still faces a challenging future as such a cost would likely put downward pressure on global trade growth. These policies would also increase operating expenditures for Maersk directly through their GHG emissions and indirectly from higher fuel costs due to higher passed through diesel production costs.

However, despite climactic and macroeconomic uncertainty, Maersk’s proactive measures demonstrate both resiliency and adaptability. Even with the headwinds of climate change in the 21st century, Maersk is charting a course for sustainable success.

Coca-Cola and Water Scarcity: substantial progress or just another drop in the bucket?

Before the Burp: Can DSM be the cattleman’s savior?