Few can dispute the fact that the development of global trade over the last few decades has led to tremendous economic growth for emerging and developed countries alike. But the enabler of global trade, the shipping industry, is responsible for around 3% of global greenhouse gas (GHG) emissions, which raises important questions about the future of shipping and its effect on trade. If the shipping industry lowers its carbon footprint but incurs higher transportation costs, will it curtail global trade and commerce?

A study by the International Maritime Organization (IMO), a UN agency focused on regulating international shipping and prevention of marine pollution, estimates that ships’ CO2 emissions will continue to grow between 50% and 250% by 2050. Global shipping is estimated to generate slightly more CO2 emissions than aviation[1], so the challenges are striking in scale and in importance, particularly in a world of increasing trade.

In 2015, most of the world reached a commitment to curb GHG emissions and keep temperature increases below 2º C through the Paris Agreement.[2] Touted as a critical step in the right direction, the Paris Agreement fell short largely by ignoring the effect of ships and airplanes.[3] Less than a week ago, however, the IMO released a long-awaited climate plan to address marine pollution, calling it “another good news story for the #environment” on Twitter.[4]

Under the plan, an interim strategy to address GHG pollution will be set in 2018, and five years after that it will outlining more specific climate-protection measures.[5] The notable omission of actual reduction targets and the lack of a promise to reach a binding agreement on such targets over the next 8 years was a highly disappointing example of kicking the can down the road.

Somewhat surprisingly, 51 organizations including some of the largest shipping names in the world such as Maersk, Unifeeder, and Cargill, submitted a letter to the IMO calling for stringent and ambitious emissions reduction objectives.[6]

Maersk Line is the world’s largest container shipping company, operating 611 container vessels and generating over $23bn in revenue. Maersk has been at the forefront of carbon footprint reduction, achieving a 42% decrease in CO2 emissions per container from 2007 to 2015, and committed to taking this number to 60% by 2020. Maersk generated emissions of 44.6g of CO2 per container per km, 20% lower than the industry average of 53.4g.[7] Maersk was able to reduce its total emissions while increasing its total transported containers: 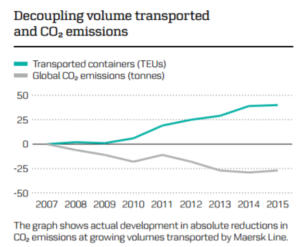 Maersk claims it achieved this through a combination of investing in new, more energy efficient vessels, in network and data improvements, and in retrofitting older vessels to increase container capacity. Vessels with higher capacity carry more goods on every trip while keeping the overall energy bill the same. More importantly, Maersk engaged in slow-steaming, or the practice of running ships at well below maximum speed. Reducing speed by 20% allows for a 40% decrease in the amount of fuel consumed, cutting CO2 emissions as well as fuel expenses. It also improves schedule reliability: slow and steady wins the race. Slow-steaming’s emission reductions were significant even after accounting for the fact that Maersk had to add 1-2 vessels to compensate for the lower service frequency.[8]

But not everything has been rosy for Maersk. The benefits of slow-steaming have eroded as the low fuel price environment makes the trade-off between speed and needing additional vessels less attractive.[9] Combined with its substantial investments in new, efficient vessels, Maersk was not low-cost enough to handle the decline in freight rates this year, posting a net profit loss of $116mm in Q3 2016, a decrease of $380mm over the prior year.[10] It now seems obvious why they want other shipping companies to be held to the same environmental standards.

The IMO must urgently ramp up its marine pollution reduction goals to level the playing field so that good companies like Maersk do not feel forced to revert to lower cost practices that are harmful for the environment just to compete. It should institutionalize slow-steaming by monitoring boat speed, set clear targets on emissions per container reductions, and encourage ships to switch from diesel to liquefied natural gas as fuel, which studies show would produce far less emissions of harmful gases such as SOx and NOx.[11]

[6] “Maersk and co call on IMO to set ambitious emissions target.” By Rebecca Moore on 10/20/2016 for Tanker Shipping and Trade. Accessible here.

[11] IMO: Studies on the Feasibility and Use of LNG as a Fuel for Shipping, 2016. Accessible here.

Venice – the risk of the disappearance of an entire city