Napster was just the beginning. Years of legal battles culminated in the end of free music downloads, but the damage was done: consumers demanded digital music, and the battle to own the next frontier had begun. Spotify owns the current subscription-based streaming model with 36% of global subscribers; Apple and Amazon trail with 19% and 12% share, respectively.[1]

As streaming giants have begun to dominate music, the role of machine learning has increased dramatically. Spotify is well known for its “Discover Weekly” playlists – a curated set of songs that the company puts together based on the subscriber’s listening history. As of 2016, the last time Spotify made a public announcement about its success, the Discover Weekly feature had generated more than 5 billion streams from over 40 million users – at the time, nearly half of all subscribers.[2] The trend is evidenced below:

And therein lies the problem for Sony Music. One of the critical roles it played in the music ecosystem – promoting music that consumers would listen to – has been effectively replaced by Spotify. Sony will be unable to regain that advantage without a resource that is currently in Spotify’s control: listener data. As a result, Sony is grappling with diminishing power in a value chain they used to dominate. A simplified version of this dynamic is below: 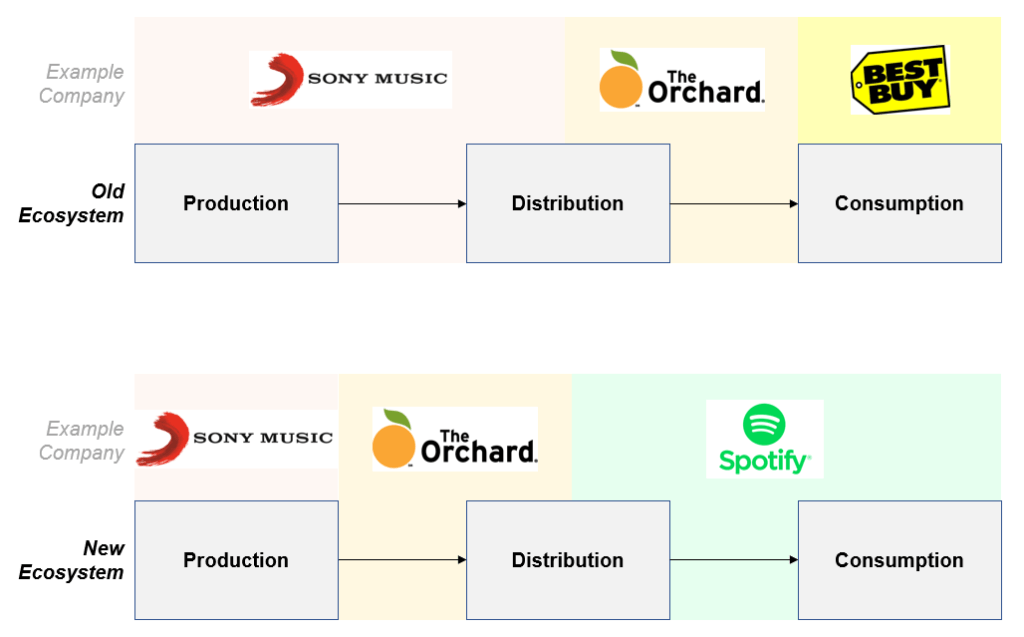 The music industry has historically been poor at predicting and adapting to change. This time, Sony appears to be aware of the threats in the industry, asserting in its most recent annual report that technological and consumer changes constitute a meaningful risk to its operations.[4]

Sony recently increased its stake in The Orchard, a major distribution player, and EMI Music Publishing. With The Orchard, Sony is able to assert influence on a greater part of the value chain; with EMI, Sony has access to more artists. In the short-term, these acquisitions allow Sony to reclaim some of the leverage that Spotify has taken.[5]

Sony appears to be willing to depart from its traditional role in music, as evidenced by two moves that position the company well for the medium-term. Sony created a position for Chief Data Officer, whose role includes building predictive tools to support Sony’s strategic artistic and commercial initiatives.[6] Further, Sony Music is looking to the popular mobile game Fate/Grand Order to provide diversified revenue streams outside of music altogether. Exploring gaming while leveraging core competencies may protect Sony Music from future dramatic changes in the industry.

The proliferation of technology has democratized music in a way that Sony can take advantage of by crowdsourcing artist recommendations from a wide variety of sources and hosting virtual competitions in which artists showcase their talents via uploaded videos. In the short-term, Sony can use technology to better source global talent.

But in an industry increasingly dominated by algorithms, those organization with access to user data will continue to win. Lower product margins and a reduced need for traditional marketing may render Sony irrelevant in the medium-term. Sony needs creative strategies to get user data. Possible ideas include:

[1] Statistia, “Share of music streaming subscribers worldwide as of the first half of 2018, by company,” access November 12, 2018

[3] Naveed, Kashif; Watanabe, Chihiro; Neittaanmaki, Pekka; “Co-evolution between streaming and live music leads a way to the sustainable growth of the music industry – Lessons from the US experiences,” Science Direct, accessed via Factiva on November 12, 2018

2 thoughts on “Machine Learning and Music: What About the Record Labels?”