Less than 35% of the adult population in Sub-Saharan Africa has access to financial services[3]. Such a lack of financial inclusion is mostly due to the fact that banks consider the financial case for inclusion to be negative. However, a majority of analysts say that “over the coming years, mobile money, electronic payments and new banking technologies will continue their significant contribution to sustainable economic development”[4] in Africa. Only a limited number of initiatives have reached a sustainable scale to date: M-Pesa in Kenya (Exhibit 1), MTN Uganda, Vodacom Tanzania or FNB in South Africa[5]. 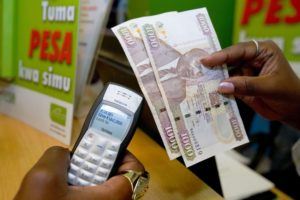 In 2007, Safaricom (Kenya’s largest mobile network operator) launched “M-Pesa”: “M” is for mobile, “Pesa” is for money (Swahili). The concept was simple: any “M-PESA customer” can use his or her mobile phone to “move money quickly, securely, and across great distances, directly to another mobile phone user”[6].

How M-Pesa used digital at the beginning…

Easy – The customer does not need to have any bank account, any fancy smartphone or any high-speed internet connection. He or she only needs to register for an M-Pesa account with Safaricom. It is also very easy for a customer to find an agent/”Safaricom dealer” – more than 50,000 of them being spread across the country (Exhibit 2). 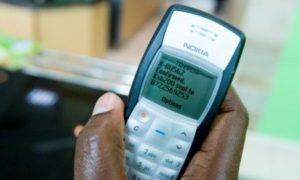 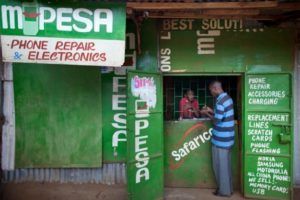 Intuitive – Customers transform cash into e-money at “Safaricom dealers” and follow simple instructions on their phones to make payments.

Secure – The account is secure, PIN-protected and supported with a full time customer service.

However simple the concept might seem, technology was a key driver in how significantly the value proposition evolved after the initial launch.

First, the intent was to create a service which “would allow microfinance borrowers to conveniently receive and repay loans using the network of Safaricom airtime resellers”[7]. Very quickly, customers started to send remittances home and M-Pesa evolved to a “general money-transfer scheme”[8]. More recently, M-Pesa was extended to offer loans and savings products, or even to disburse salaries or pay bills.

… to meet a growing and sustainable success

Within its first month of operations, Safaricom registered over 20,000 customers – way more than the targeted business plan[9]. Today, M-Pesa is used by over 25 million active customers[10], after recent expansion to new countries such as Afghanistan, South Africa and Romania. For Kenya only, around 25% of the country’s gross national product flows through it.

The business model also seems to be sustainable for Safaricom: on the topline, users are charged a small fee for sending or withdrawing money. On the bottom line, M-Pesa built on their existing mobile credit sellers, turning them into “mobile money agents” with very limited investment and additional costs.

The impact on community was also impressive: in rural Kenyan households which adopted M-PESA, average income increased by 5-30%[11]. In addition, the availability of a reliable mobile-payments platform led to a huge increase in the number of start-ups in Nairobi.

Critics point out that the advanced technology was not the reason why M-Pesa was so successful. Some experts said that M-Pesa was “built mostly on a favorable regulatory and technological environment absent in other markets. […] For things to work, you need a country with supportive regulation and reversals in cultural attitudes that often view money as meaning cash“[12].  In addition, in other countries with less favorable regulation dynamics, M-Pesa was far less successful.

Moreover, the barrier-to-entry to this market is very low. Today, many banks are designing services with lower technological requirements and easier offerings. For instance, in 2012, Barclays introduced “Ping-it” (Exhibit 3), a payment method that allows one to send or receive up to £300 a day to or from other people, just by using a mobile phone number. Its success was impressive, with more than one million downloads in the first six months. 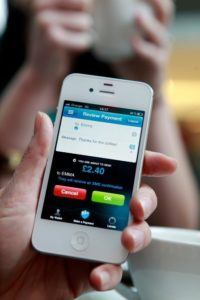 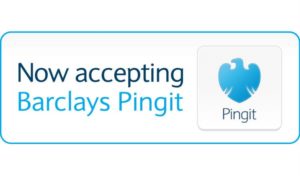 In front of such challenges, will M-Pesa manage to leverage its first mover advantage and achieve enough technological improvement to become a sustainable leader?

[1] Rachel Bostman, “Mobile money: the African lesson we can learn”, quoting a survey conducted by the Gates Foundation, the World Bank and Gallup World Poll

[2] Rachel Bostman, “Mobile money: the African lesson we can learn”

Bringing the solar system home… and making it smarter