Southwest Airlines creates and captures value by transporting customers from point A to point B. They do so with a keen understanding of their target market: customers seeking low cost fares to select destinations. Most importantly, though,

they have successfully optimized their operations to match this business model.

Of the countless aircraft model types to choose from, Southwest has remain committed to one, the Boeing 737. In general, aircraft operations are accompanied by significant challenges. Some of these include:

By exclusively operating a streamlined fleet of 665 Boeing 737s, Southwest is able to achieve efficiencies in all of the above areas. Clearly Southwest identifies this decision as an operational competitive advantage as evidenced in the aftermath of their 2011 acquisition of AirTran. Although the acquisition brought along 66 airworthy Boeing 717s, SWA decided to divest them rather than strain its operations (Without a Heart, 2014).

While several of the operational advantages of a homogenous fleet are easily seen, the decision creates opportunities for very high asset utilization. The average SWA aircraft spends approximately 9 hours per day in the air versus the industry average of around 7 hours (Tully, 2015). Keep in mind that this is performed in conjunction with shorter average leg lengths as well, providing more revenue opportunities by volume.

Southwest uses several levers to help keep their utilization high, including an astonishing 25-minute turn time (ground time between flights) (Finney, 2006)! By instilling a team-oriented culture from Day 1 of new employee training, the company manages to work in an extremely efficient manner to accomplish required ground tasks. For example, it is not uncommon to see the pilots assisting with loading bags or cleaning cabins with the flight attendants (Mudali and Kaura, 2011). Each of these may seem like small acts, but the team first mentality is not incredibly common amongst the pilot community.

Another contributor to fast turn times is the way in which Southwest has “trained” its customers. By not offering reserved seats, SWA incents customers to arrive on time and file onto the plane in a quick manner. While it may seem small, every minute counts and leads to more time the aircraft can spend actually flying from point to point.

Point to Point and Destination Selection

In the early days of the company, there was no need for a hub. As the airline continued to grow, it stayed with this model in contrast to the hub and spoke model used by most airlines. By maintaining this operational structure, SWA is able to provide more customers with direct non-stop routing. In 2014, 73% of SWA customers flew non-stop with an average flight duration of 2.0 hours (Southwest Airlines Co., 2014).

By continuing point to point operations, SWA’s frequency at the busiest airports is fairly low, with only four of Southwest’s top 10 destinations overlapping with the top 10 busiest airports in the United States. Operationally, the lower amount of congestion at these destinations plays in to SWA’s expertise of minimizing ground times, feeding back into higher asset utilization (Southwest Airlines Co., 2014). From the customer’s point of view, SWA’s destination select 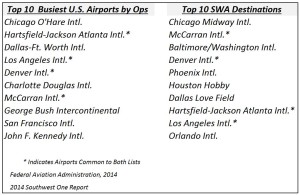 ion reduces the hassle of dealing with many large airports, providing a convenience factor to go alongside low fares.

Southwest Airlines is an exemplary company by almost any standard. For over 40 years, the company has developed strategies to increase value for its customer and maintain profitability. Simultaneously, they have remained true to their operational advantages: streamlined assets, high utilization, and superb market selection. The ability they have shown to integrate their business model with their operational model is something all of us in the business world should LUV.

Student comments on LUV What You Do