In October 2016, the United Kingdom held its breath and braced for impact. Supplies of Marmite, a salty yeast-based spread that is adored by the British consumer (and known for its “Love it or Hate it” divisive nature [1]) were dwindling at Tesco, the UK’s largest supermarket chain [2]. The consumer was confused and angry: how could a quintessentially British product be running low at a quintessentially British supermarket? A by-product of beer brewing, Marmite has been manufactured in England since 1902 [3] and, although versions of it exist in other countries, it remains a primarily UK-only brand [4]. 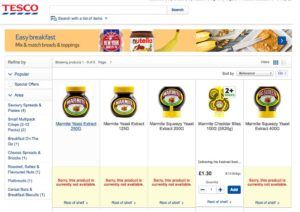 A dispute on price

However, Marmite (with sales of c.£28M/$37M per annum [6]) belongs to Unilever, the Anglo-Dutch conglomerate. By October 12th 2016, Unilever had stopped delivering about 200 household products to Tesco due to an unresolved dispute on price [7]. Several months after the Brexit referendum on June 23rd 2016, Unilever claimed that the decrease in the pound (from $1.50 on the day of the referendum to $1.22 by October 13th [8]) forced it to increase the price of its products by 10% [9]). Although manufactured in the UK, Marmite’s packaging and raw materials would have been purchased from overseas, and higher prices for these would have raised the cost of producing Marmite [10]. In addition, Unilever reports its sales in euros in its earnings reports, so the sterling proceeds of Marmite sales would have been worth less than before [11]. Ironically for a nation of tea-drinkers, another Unilever product affected was PG Tips, a common tea bag brand.

Although the Unilever standoff was publicly announced, these issues are not unusual in the grocery sector [12]. But this time, not only was the British public made aware of the issue, it was also (perhaps for the first time) made aware of the day-to-day economic and lifestyle consequences of its decision to vote for Brexit. While government officials have repeatedly emphasized that no one voted for Brexit to “trade less” globally [13], Brexit’s victory was supported by an undercurrent of nationalism and isolationism [14].

In another competitive context, Tesco would have passed on the supplier’s price increase to the end consumer. However, Tesco’s recent market share decrease to discount stores Aldi and Lidl [15] led it to enter a pricing war with Unilever. Tesco would rather lose customers who would choose their local Aldi to shop for Marmite and PG Tips than appear not to be the British people’s champion on low prices [16]. During a few days, Tesco publicly held its ground, but eventually the debate was settled with a likely compromise on the part of both organizations, although the terms of the agreement were never publicized [17].

However, this raises a question for Tesco and other supermarket retailers. As industry experts predict that food prices will rise by c.3% over time due to the impact of the falling value of the pound and the fact that many other conglomerates (such as Nestlé) report in euros [18], how will supermarkets deal with the increase in prices in the future? The conglomerates own a number of power brands which makes it impossible for supermarkets to refuse to stock their products.

One mitigating solution is for retailers to increase their purchasing power. This is what Tesco is attempting to do with the planned acquisition of a UK-wide wholesaler, Booker (given provisional approval by the competition watchdog on November 14, 2017) [19]. The acquisition will not only cut costs by merging distribution and other operations, it will also increase Tesco’s bargaining power with suppliers, as analysts estimate Booker will add £2Bn-£3Bn ($2.6Bn-$4Bn) to Tesco’s current £45Bn ($60Bn) of buying power [20].

Another longer-term solution is for Tesco to consider localizing its fresh produce suppliers to accommodate the higher cost of purchasing items sourced in euros [21], particularly products such as dairy [22]. Aldi and Lidl had been the most proactive in driving provenance and localism with their fresh produce suppliers before the Brexit vote, and as a result are likely to be the least affected in the short to medium-term [23]. Some of the UK’s isolationist tendencies that led it to vote for Brexit might therefore, in the long term, lead it to de-globalize after all.

The case of Tesco and Unilever brings up additional questions:

[14] Chan, Szu Ping, “From Brexit to the rise of protectionism: is the world facing an era of permanent low-growth?,” The Telegraph, October 10, 2016 [http://www.telegraph.co.uk/business/2016/10/09/brexit-gloom-has-lifted-but-the-big-issue-still-looms-large-is-t/]

[20] Butler, Sarah, “Why is Tesco buying Budgens’ owner – and will it affect shoppers?,” The Guardian, January 27, 2017 [https://www.theguardian.com/business/2017/jan/27/tesco-booker-shoppers-takeover-londis-budgens]

Student comments on Love it or Hate it: The consequences of Brexit on a supermarket’s supply chain