Trump is not alone trying to “make the country great again”; nationalism is spreading fast around the globe. In particular, Chinese nationalism has become more fierce and vengeful.[1] Should the trend alarm any player in the private sector?

Lotte Group, South Korea’s 5th largest conglomerate (Chaebol) with major business lines in shopping, food products, and construction, has every reason to worry. China represents Lotte’s biggest overseas market and generated more than $2.7 billion revenue for Lotte in 2015. Chinese accounted for nearly half of the million customers that poured into its hypermarkets around Asia every day. Lotte also operates Korea’s largest duty-free shop in the Incheon International Airport, where Chinese tourists alone generated 70% of its revenues.[2]

Lotte is now in a big trouble. In March 2017, China launched retaliatory actions against Korea and its businesses over its decision to deploy a U.S anti-missile system (THAAD) in Korea. The system could pose security threat to China, sparking angry nationalism among the Chinese public and policymakers. First, China banned tour groups from going to South Korea. The number of Chinese tourists halved in 2017, which hit Lotte hard. It is reported that the duty-free shop now cannot pay rent for the remaining period of a five-year contract with the Incheon Airport.[3] In addition, Beijing shut down 74 of 99 Lotte stores in China after conducting sudden fire safety inspections. Lotte closed 13 stores due to a boycott by Chinese consumers.[4] 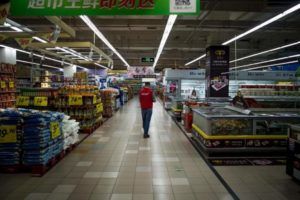 How is Lotte Responding?

Lotte initially stayed passive with the hope that the relations between the two countries would improve soon. A Lotte official noted “The THAAD issue is not something one company can solve.”[5] However, as the conflict remained unresolved, the company implemented a number of short-term strategies. First, it launched marketing campaigns to win back Chinese customers. Chinese signs, reading “We understand you. So we wait,” were put up in Lotte’s stores to target Chinese customers. The group chairman Shin also said he loves China during an interview with the Wall Street Journal. [6]However, none of the campaigns were impactful.

(Picture: Lotte’s marketing campaign “We understand you. So we wait”)

Lotte then started pouring capital to sustain its Chinese operations. It borrowed US$300 million earlier this year to support its stores in China. Then it poured another US$300 million into its Chinese operations in August.[7] However, with the Chinese retaliatory crisis lasting longer than expected, it became difficult to sustain the business anymore. Finally, Lotte announced in September its plan to retreat from China. The company selected Goldman Sachs to manage the sale of its hypermarkets and supermarkets.

As a medium-term solution to mitigate its heavy reliance on China, Lotte has been expanding into other emerging markets, including Russia, Vietnam, and Indonesia. Its operations in those countries are relatively small at this point, but Lotte might focus on those markets and further diversify into other countries going forward.

What other steps can Lotte take?

I believe it is an unwise decision of Lotte to pull out from China. China, which has the biggest customer population and is located close to Korea, remains to be the most attractive market. It will be thus extremely challenging for Lotte to sustain its growth without tapping into the Chinese market.

As a short-term step, I recommend that Lotte drop its current plan to dispose its stores in China and instead turn them into joint venture structure with local Chinese partners. In July 2014, Chinese Premier Li Keqiang said that China wasn’t interested anymore in having foreign companies take advantage of the Chinese market; he wanted them to become partners of Chinese firms.[8] Once Chinese partners own and run a significant part of Lotte’s operations through joint venture, Lotte will be in a better position to manage Chinese regulators. As successful examples, Pharmaceutical companies GlaxoSmithKline and Novartis partnered with local Chinese companies and managed to gain access to government vaccine-procurement programs.[9]

As a medium-term step, Lotte should design and push a localization strategy. General Electric has been successfully implemented its localization strategy in China by building more than 30 production sites in China, allowing Chinese partners to access GE technology, and offering training for Chinese executives. As a result, GE was able to build strong connections with the Community Party leadership and the state-owned enterprises. [10] Likewise, Lotte can share with local partners its know-how around hypermarket operations, teach local workers new skills, and invest further in the community.

Lotte’s suffering showed that a strong economic power can severely damage foreign companies on the back of rising nationalism. What can a company do when the political conflicts are beyond its control? What is the best way to mitigate the unpredictable political risk? Do China’s retaliatory actions represent the bigger trend of rising nationalism or are they merely a one-off incident?

The US Navy’s War Against Climate Change