While much of the global climate-change conversation focuses on how the world’s most recognizable corporations are responding to the crisis, less is mentioned about how power generation companies can affect change further upstream.

Duke Energy, a corporation founded in the early 1900’s to provide hydro-electric power to southern states in the US, has grown into one of the largest electric power holding companies within the United States [3].  With greater than $ 121 billion in total assets, Duke Energy is responsible for lighting the homes and business of nearly 7.4 million customers throughout the American Southeast and Midwest.  Add on holdings in various Latin American countries, and this Fortune 250 corporation is positioned to have significant impacts in the push for increased sustainability.

How is the organization likely to be affected and the steps they are taking:

To adequately address this topic, it is helpful to examine the sources from which the company derives their energy.  Traditionally US power generation derives from 4 main sources with coal and natural gas each comprising approximately 33% of the supply curve [2]. 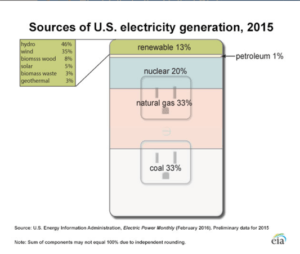 Duke Energy falls into roughly the same distribution with an additional focus on utilizing its production capacity in nuclear energy [4]: 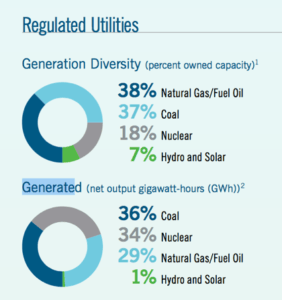 Where the company falls short is in their lack of renewable sources.  In fact, in the company’s Carbon Disclosure Project report, Duke Energy cites that the company will be most affected by:

Duke explicitly notes that, in the face of statewide legislation mandating an increased percentage of electricity be generated from renewable sources, the company has been forced to increase utilization of their existing infrastructure.  This infrastructure in renewables, though has not been enough and has prompted large capital expenditures to further develop the company’s capabilities [1].  Duke Energy notes that “through acquisitions and development projects, by 2015 Duke Energy had over 2,500 MW of combined wind and solar capacity on line with the goal of increasing this to 8,000 MW by 2020 [1].”  Similar Clean Power initiatives limiting CO2 emissions have led the company to undertake large scale decommissioning projects of their coal burning plants, and to develop new biomass scrubbing technology in an attempt to offset their CO2 production.

Occurring in tandem with legislation are changes in consumer behavior surrounding climate-change.  With the development of electric vehicle technology, consumers are demanding more of Duke Energy’s products and services—this increased demand creates a friction between the desire to use less energy and the need to supply “clean energy” to the user.  Even with this friction, though, “widespread adoption of electric vehicles will cut emissions (even in regions where most electricity is produced by coal), by 25-30% over conventional vehicles [1].”  Such changes in consumer preferences have prompted Duke Energy to create an internal group dedicated to overseeing and even encouraging consumer adoption of electric vehicles.

These pressures listed above, in conjunction with stated overarching corporate goals to deliver low cost clean energy, have prompted Duke Energy to pursue many avenues to achieve their 2020 goals of increasing renewably provided energy to the 8000 MW level, but are these steps enough?

With sustainable change occurring through acquisitions and capital investments into costly infrastructure Duke Energy finds themselves in a unique situation.  While they tout their current programs, citing that “as of January 5, 2016, Duke Energy had a Bloomberg ESG Disclosure Score of 50.2, the third-highest score, in the top quartile, among our peer U.S. utilities in the Bloomberg listing [4], many watch dog institutes believe the corporation is not doing nearly enough.

If Duke Energy is going to continue to be a leader within the electricity space, they must continue to push their development of alternative energy sources.  Though acquisitions are a sure way of quickly amassing renewable energy sources, they do little to change the culture of the corporation for long term survival.  In order to put in place sustainable change, Duke Energy must:

Only time will tell if Duke is able to “keep its lights on,” but in the face of increasing governmental and societal pressures for improved sustainability, Duke Energy will have to find a way to (cleanly) light the path forward or go up in smoke.