Shipping brings us 90% of everything we buy and consume, from our clothes to our TVs to our cars. [1] And yet recognition of the impact of shipping on the environment is shockingly low. Shipping is one of the fastest growing sources of transport greenhouse gas (GHG) emissions, accounting for approximately 3% of annual global CO2 emissions, with a projected increase of 50-250% in the period up to 2050. By comparison, the much maligned Aviation industry only accounts for 2% of global CO2 emissions [2].

And yet because shipping is such a fundamental part of global trade, there is little appetite by governments and regulators to introduce programs to reduce emissions. In fact, the head of the International Maritime Organization (IMO) argued at the climate talks in Paris last year that a cap on emissions for shipping would damage the world economy. [3]

So the question arises – is there an opportunity to reduce shipping emissions without impacting growth?

One company that thinks so is Skysails GmbH from Hamburg. Chosen by the World Economic Forum as a 2008 Technology Pioneer [4], their innovative solution uses automated kites to tow large container ships. Think kite-surfing, but on a highly advanced scale.

Skysails has equipped five ships so far, enabling them to increase speed, cut fuel consumption, and significantly reduce emissions.  “Wind is the cheapest, most powerful, and greenest source of energy on the ocean,” says founder Stephen Wrage, “and kites are by far the most efficient system of generating that energy.” [5]

The Skysails propulsion system consists of three main components: a foil towing kite, a launch and recovery system, and an electronic control system for automated operation. It can be installed on new builds and existing vessels.  The 150-1000 m2 kites (1,615-10,764 sq. ft.) aren’t cheap – they cost anywhere from $450,000 to $3 million. However the company says they pay for themselves within three to five years through reduced fuel consumption and emissions. [6]

Speaking of which, how effective are they? Skysails say one kWh of SkySails power costs $0.06, or half as much as one kWh from the main engine. Their first partnership with Beluga Shipping produced an average fuel savings of 10-15%. The IMO estimates that SkySails technology can eliminate up to 100 million tons of carbon emissions every year – equivalent to 11% of Germany’s CO2 emissions. [7]

A lack of sails – structural issues

So why has SkySails not attracted interest from ship companies? According to Henning Kuehl, head of business development at SkySails, “There’s a structural problem slowing down the process: ship owners (who have to make the investment) often don’t pay for the fuel – that’s the charterer’s duty. The charterer on the other side doesn’t charter the ship for long enough a period to make low-carbon technologies pay back.” [8] Combine this with low fuel prices and little political incentive (there is currently no regulation limiting shipping carbon emissions), SkySails is finding it difficult to get lift-off.

SkySails’ operating model is based on two principles – reducing fuel cost & improving a company’s sustainability image. SkySails needs to do more in these areas if it is to have any chance of developing a global business:

SkySails is also looking at expanding their operating model to use high-altitude kites to replace conventional wind turbines:

Around 50 million euros have been invested in the technology to date, with a 3.5MW product and test farm already developed. Diversifying into this area allows SkySails to develop an environmentally friendly and recognizable brand. Only time will tell if it will get off the ground and truly soar.
(793 words) 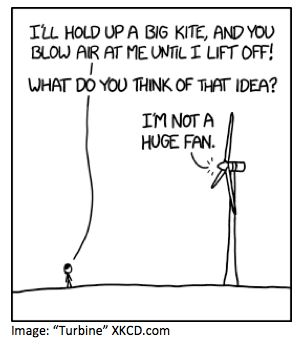 [8] Levitt, “Why aren’t ships using wind-power to cut their climate footprint?” (see above)

As the Maldives sinks, the world plays the fiddle

Vote with Your Wallet and Race to the Top