On the brink of bankruptcy in 2004, LEGO staged an impressive turnaround to become one of the top global toy companies.[1] LEGO achieved this by streamlining their supply chain in the following ways:

In 2016, LEGO reported stalling sales in Europe and North America, but double-digit growth in China[6]. Their Chinese market share was only 2.8%, leaving enormous potential for growth.[7] However, toys imported into China are subject to high import taxes, a result of China’s isolationist trade policies. To sell in China, LEGO’s costs must become more competitive. At the same time, LEGO must protect their market share in Europe and North America, both of which have uncertain futures related to isolationist trade policies.

Throughout its history, LEGO never manufactured in China, a fact it leveraged as a quality differentiator to North American and European consumers.  In contrast, other major toy companies (e.g. Mattel and Hasbro) rely on Chinese manufacturing and have faced consumer backlash on quality and safety.[8]

In addition to stalling sales in the United States, LEGO also faces the specter of US isolationism. With the looming renegotiation of NAFTA, import costs from LEGO’s Mexican factory to the US could have devastating effects to their gross margin. LEGO’s 2016 US sales were 27% of their $5.93B total global sales.[10] With such a crucial market threatened, LEGO must weigh the costs and benefits of moving manufacturing into the US.

A move to China

LEGO has already taken the necessary steps to get around LEGO’s high import taxes. In 2016, LEGO opened their first Chinese factory.[11] In the short term, they are working to ramp the Jiaxing factory to full capacity while maintaining quality standards and aggressively expanding their Chinese and wider Asian market share.[12] LEGO has announced their new supply chain strategy for the Asian market: all of the products they produce in China will be sold in Asia, with the remaining Asian demand met via shipments from Europe.[13]

Medium term, LEGO is keeping their eye on the US and potential disruptions to NAFTA. Their leadership has expressed a cautious attitude, preferring to wait before taking action. LEGO’s leadership recently stated that any disruptions to NAFTA are “speculation at the moment. We would rather wait to see what happens.”[14] 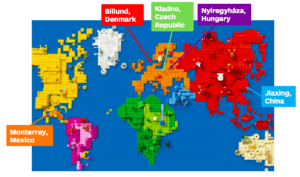 LEGO has taken positive first steps to increase market share in China. As China’s market demand grows, it will likely become one of their largest markets and LEGO should have a plan in place to expand their Chinese operations. Under the current plan, they will be importing approximately 20% of their goods sold in China. With rapid market growth, that could become increasingly costly. Additionally, LEGO should consider a major Chinese partner, such as Alibaba, to increase the speed of market penetration.

Unlike companies that produce larger, more complex products like cars, LEGO plants require lower skilled workers, smaller machinery, and shorter lead times and therefore have more flexibility in deploying plants. LEGO should consider reopening US manufacturing in the short term to preserve US market share and shield the company from potential isolationist policies.

LEGO should also look earlier in the supply chain for additional diversification opportunities and consider new raw material sources apart from oil. In 2015, LEGO pledged to move to sustainable materials by 2030.[16] LEGO should accelerate this timeline to mitigate reliance on a commodity that is dominated by areas with political instability and to price fluctuations.

What other sources of diversification should LEGO introduce into their supply chain to insulate operations from political uncertainty?

Should LEGO take a wait and see approach with US manufacturing, or set up US operations now?

NIKE: Is it the Sustainability Transformation of the Decade?

8 thoughts on “LEGO: The missing bricks in their global supply chain?”