Shifts in digital technology are causing widespread disruptions across many industries, and the toy industry is in no way immune.  LEGO Group, a Danish toy manufacturer, offers an example of both the challenges presented by digital technology in the world of physical products as well as the opportunities if digital trends are harnessed and effectively applied across a company’s business and operating models.

In in the late 1990s and early 2000s, LEGO had taken massive strides into the digital space, producing several generations of interactive websites, console games, and computer media.  Yet by 2004 the company was in trouble, posting a $140M loss in March of the year and announcing that it would be cutting 500 Jobs.[1]  In addition to production inefficiencies and supply chain problems, a significant contributor to this loss was the challenge posed by digital transformation, which had begun to take its toll on the company’s bottom line.

At the core of the problem was LEGO’s misapplication of digital transformation to both its business model and its operational model.   In terms of the former, LEGO had diversified itself into digital mediums which distracted from its core product offering—the LEGO brick.   Digital media and video games showed promise, but LEGO was simply not adept at developing them and saw a series of media flops with corresponding losses.[2] As for its operational model, LEGO’s Press Officer in 2004 described a general lack of information flow in the company: “We had a lot of knowledge silos within the organization. One hand was doing something that the other didn’t know.”[3]

Under a new CEO, Jorgen Vig Knudstorp, the company began to leverage digital technology to repair its past mis 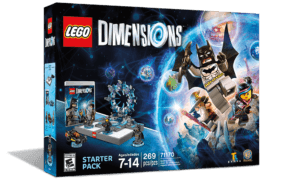 takes and return to its core value proposition.  It did so by focusing on simultaneous improvements to its business and operational models.

New Product Offerings: LEGO’s digital improvements to its business model refocused the company on its core physical product while allowing the company to still make inroads into other forms of entertainment. It made efforts to bridge the gap between digital media and physical LEGO bricks through more advanced software and hardware design.  Its first game in this space, “Life of George,” was launched in 2011, and it allowed users to construct physical LEGO designs which then were scanned into the game.[4] “LEGO Dimensions,” launched in 2015, further developed this concept.  The game employed about 300 physical LEGO pieces which were used to actually build the controller.  The controller could then scan physical LEGO constructions and render them on the screen.[5]

Product Design:  LEGO also leveraged digital technology to “crowdsource” its product design through communities of fans and designers on the internet.  In 2008 it launched “LEGO Ideas,” a website in which users could create and submit product designs which were subsequently voted on by their peers.  If the design received 10,000 or more votes, it would proceed to an official LEGO review board.  Crowdsourced designs performed relatively well in the market, and the site also allowed the company to keep a thumb on current consumer trends and interests.[6]

New Enterprise System.  Beginning in 2004 LEGO restructured its Enterprise IT system in order to improve data-sharing across the company.  The complicated user interface was replaced with a simple, app-styled model which ensured each employee only operated apps applicable to his/her specific job.  This decluttered the internal company site and allowed employees to quickly access required information.  LEGO also adjusted its IT hiring policies and implemented a system of rotating its employees throughout the organization in order to build wider industry exposure.  Furthermore, it instituted IT internship programs within its enterprise system and increased its hiring rate from Silicon Valley.[7]

LEGO’s use of digital technology since 2004 has been largely successful in improving its operating and business models, but there are additional areas of improvement that are worth considering as the company moves forward.[8]

Leverage Virtual Reality:  Virtual Reality is becoming an increasingly important playing in the video game industry, and offers an opportunity for LEGO to continue to bridge its physical and digital worlds.[9]

Continue Licensing Model in Digital Media:  This is an area in which LEGO has been incredibly successful, and the 2014 collected over $460 million at the box office.   This model allows the company to continue its focus on its physical product while diversifying into alternative revenue sources.

Expand Design Crowdsourcing: LEGO should consider expanding the “LEGO Ideas” model to be more accessible to a broader array of designers.  The current platform is quite stale and relatively difficult to use for a novice designer, which imposes a limit on the breadth of design ideas LEGO can access.[10]  In addition, the company should consider national or global-level design competitions as part of a broader digital media strategy. (788 Words)

The digitalization journey of a German manufacturer: How Siemens is increasingly becoming a Tech company

There’s an App for Trash, Too

Student comments on LEGO in a Digital World