Without doubt, Lego is one of the most successful companies of this decade: In 2015, Lego overtook Mattel and became the world’s biggest toymaker [1]. In the same year, it also became the world’s most powerful brand, before Red Bull, L’Oréal, Burberry, Rolex and Ferrari [2]. According to some sources, Lego people will soon outnumber actual people in the world [3].

While this may not seem surprising to most of us growing up with Lego bricks, it demonstrates a hugely successful turnaround after years on the verge of bankruptcy a little more than a decade ago. 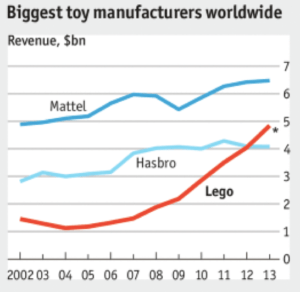 Lego was founded by Ole Kirk Kristiansen in Billund, Denmark in 1932 and originally manufactured wooden children’s toys [4]. The brand name Lego comes from the appreciated version of the Danish “leg godt” which translates to “play well”. With the help of the iconic Lego brick, Lego turned into a multimillion dollar business that is still owned by the decedents of the founder. The first Lego brick was developed in the 1950s and the brick system patented in 1958.

This and other patents protected Lego’s growth for many years until the last major patent expired in 1978 [5] and competitors started entering the market. In 1991, the market entry of Mega Bloks into similarly sized plastic bricks was cause for concern as Mega Bloks quickly became the number two behind Lego [5]. At the same time the share of US households with personal computers reached 50% in 2000, enabling much greater the diffusion of digital games [6]. 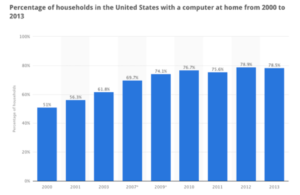 These two developments threatened Lego’s existence and almost led the company into bankruptcy in the early 2000s. Surprisingly, it was not the emergence of digital toys decreasing the size of the physical toy market or competitors increasing their market share within the building brick market that led to this.

Unlike other successful companies that missed the digital trend and thus became obsolete, Lego overreacted and overturned the strategy that had made it successful for decades. So afraid of being left behind, Lego diversified away from the Lego brick presuming that the brick no longer differentiated the company from competitors [7]. Anticipating the rise of digital toys, it set foot into the digital world early. However, it did so in an overly rushed manner, leaving consumers and retailers behind confused. “Rather than doing one adjacency every 3-5 years, we did three to five adjacencies every year” said Jorgen Knudstorp after becoming CEO in 2004 [7].

Under Knudstorp’s leadership, Lego once again focused its business model on adjacencies to its physical bricks e.g. by selling its unprofitable video games development activities [1]. In addition to selected divestitures, Knudstorp started “improving processes, cutting costs, and managing cash flow” which had been neglected in previous years [8]. Once the base of its operation model was back on track, a new R&D department was established to foster organic growth.  According to Knudstorp “The Future Lab has really pioneered that [deep ethnographic studies of how children play] within Lego, and it hasn’t been a theoretical exercise. It’s been a real design-thinking approach to innovation, which we’ve learned an awful lot from.” [8].

One of the outcomes of this research was to develop a new line to appeal particularly to girls with a range of products, games, videos, and other activities that, according to Knudstorp has proved to be very successful [8].

But despite the successful turnaround, Lego still hasn’t fully found its place in the digital world. One seemingly innovative and heavily promoted new product called Lego Fusion that eliminated the boundaries between physical and digital by allowing children to scan their physical Lego with an app has been discontinued earlier this year [9]. 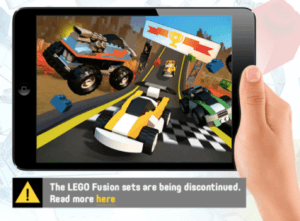 To conclude, I am not convinced that its existing product lines are strong enough to allow Lego to secure its current market leader position in the long run. Focusing on brick related digital expansions was the clear way to go to enter the digital market. Eventually there will be generations of children growing up without any physical Legos and I am not sure that Lego’s digital offering will be relevant to these consumers: If you have never seen physical Lego, what do you make of say The Lego Movie? In my mind, Lego’s successful hybrid strategy will probably serve it well for another 5-10 years. Beyond that, it needs to find a business and operating model that will allow it to capture a purely digital market (while hopefully not entirely neglecting the limited demand from parents who still believe in the educational superiority of physical bricks).

Facebook for Business: Liking Your Way to Digital Transformation

The Internet of Trash

Student comments on LEGO – from bricks to clicks: what you missed since you last played