A coastal city at risk

With 520 miles of coastline and some of the most valuable real estate in the world, New York City is at significant risk from the rising sea levels and harsher storms caused by climate change.[1] On October 29, 2012, Hurricane Sandy, the worst natural disaster ever to hit the city, demonstrated the extent of that vulnerability. Forty-four people died in the storm, 51 square miles flooded, fires raged, power went out for days, and the city suffered an estimated $19 billion in damages.[2] While Sandy was unique, the risks it exposed are significant and growing. Rising sea levels and ocean temperatures mean that a similar storm would cause nearly five times the damage by the 2050s.[3]

The New York City Panel on Climate Change indicates that both chronic hazards and extreme events will become worse in the coming decades. By the 2050s, average temperatures could rise by 6.6º F, the sea level in the city could rise by over two feet, and the number of heat waves and days above 90º F could more than triple compared with 2000 levels.[4] Among other effects, these changes would mean an increase in coastal flooding—already a regular occurrence in some areas of the city—and during the hot days and heatwaves a much greater strain on the power supply from air conditioners and cooling systems, potentially leading to rolling brownouts and blackouts if not managed properly. 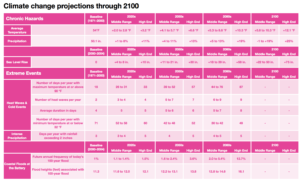 Governments have a particular responsibility in slowing climate change, and though the most power lies with the federal government, New York City has a role to play. The city’s stated goal is to reduce greenhouse gas emissions by 80% by 2050, relative to 2005 levels. This “80 X 50” plan also has an interim goal of 40% reduction by 2030.[5]

The four main sources of greenhouse gas emissions are from transportation, buildings, waste, and power production. In most parts of the country, the lead producer is vehicle emissions, but in New York City the ratio is flipped, with buildings contributing the majority of emissions. In a city of approximately one million buildings, a number of strategies are necessary to make the significant reduction planned.[6] For buildings that the city itself controls, it is retrofitting significant energy users and installing renewable power. For privately owned buildings, the city is launching a Retrofit Accelerator to provide information, assistance, and incentives to small and medium-sized building owners, and using its regulatory power to require building energy benchmarking and audits.[7] 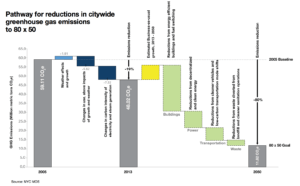 Adapting to the effects of climate change

Even as the city seeks to lessen its contribution to the problem, it must deal with the effects of climate change. For disasters like Sandy, this means being prepared to respond quickly, with all the advanced safety, communication, and emergency services of a modern city. But in a complex ecosystem like New York, the actions of one entity alone are not enough. The city must actively foster partnerships and support groups that can help it weather disasters.

Nonprofits like the Red Hook Initiative provide on-the-ground networks and responsiveness to community challenges that a bureaucracy cannot address as quickly. In the immediate aftermath of Sandy, Red Hook Initiative opened its doors to its neighbors in its low-lying coastal neighborhood in Brooklyn, offering supplies, meals, Wi-Fi, and legal and medical support.[8]

Large businesses also have a role to play—from working with their immediate communities and workers to managing the major infrastructure assets they control, from distribution fleets to telecommunications networks to backup generators.

To foster these actions, the city can provide support and funding to nonprofits, and actively build relationships with businesses. It also has some power as both a customer and regulator of major infrastructure providers—in particular telecommunications, transit, and healthcare companies—to ensure that they are prepared and actively coordinating for severe events.

What more can be done?

As the largest city in the United States—home to 8.5 million people—and a global beacon that welcomes over 56 million visitors each year, New York City has a major platform to influence the discussion on climate change worldwide.[9] [10] Mayor Michael Bloomberg (HBS, 1966) was an early leader when his administration released its first PlaNYC in 2007 as a blueprint to become “the first environmentally sustainable 21st century city.”[11] Mayor Bill de Blasio has continued that work, explicitly talking about the linkage between climate change and inequality, for example in a visit in 2015 to present the city’s plans at a Vatican summit.[12] The city has won awards and presented its sustainability work worldwide, but building a larger focus on using New York City’s experience to spread sustainability and resiliency best practices would have a positive impact both globally and locally.

“Climate Change Projections through 2100” from “One New York: The Plan for a Strong and Just City,” City of New York, 2014, p. 216, [http://www.nyc.gov/html/onenyc/downloads/pdf/publications/OneNYC.pdf], accessed November 2016.

“Pathway for Reductions in Citywide Greenhouse Gas Emissions to 80×50” from ibid., p. 167.

Chocolate Challenged at the Origin

An unexpected renewable energy revolution in the Mediterranean Basin

Student comments on Learning from Disaster: NYC After Hurricane Sandy