Planters’ Mr. Peanut has been around for over 100 years, but climate change may prove to be a formidable match for the iconic brand.  Planters currently sits under food giant Kraft-Heinz ($26.5B in revenue in 2016), with over $1B in sales, primarily of peanuts, cashews, and mixed nuts [1].  While certain headwinds like a change in taste preference toward almonds and pistachios may be capturing management’s attention in the short term, climate change is a force that may have a significant impact on Planters supply chain in the medium to long term.

A draft of the 2013 National Climate Change Assessment asserted that if climate change continues at its current pace, crops like peanuts could become scarce by 2030 [2].  This is because peanuts require a very specific environment to grow well, with up to five months of consistent warmth and just the right amount of precipitation.  Too little precipitation can result in mold and aflatoxin contamination, and too much both reduces yields and makes harvesting more difficult [3].  As climate change increasingly results in more volatile weather conditions, this can affect peanut yield and thus prices.  For example, in 2011, an abnormally hot and dry summer in the American South (where peanut production is concentrated) led to a 13% reduction in US peanut output and caused the price of Planters peanut butter to increase by 40% [4].  While the usage of precision agriculture and other technology usage may mitigate the effects of climate change to some extent, farmers and Planters will need to stay ahead of the curve as climate change increases year to year variability and harms yields. 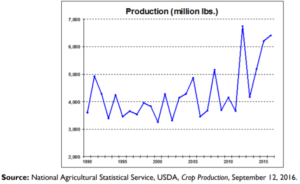 Kraft Heinz at the corporate level strives to do its part in fighting climate change with sustainability goals that aim to reduce greenhouse gas emissions, energy and water consumption, and solid waste at its manufacturing facilities all by 15% by 2020 [5].  This is also true at Planters: one Arkansas plant was even recognized by the state government for its sustainability efforts [6].  Previous Planters efforts under the “Naturally Remarkable” campaign also built green space in communities, sought to reduce packaging and shipping waste, and supported the Sustainable Agriculture Initiative Platform [7].  Still, the company’s efforts to reduce its own carbon footprint are unlikely to move the needle on global climate change, and the more relevant efforts in the short-term need to focus on mitigating the direct supply chain impact of peanut production on Planters’ business.

Kraft Heinz notes that it encourages the adoption of drip irrigation among its tomato growers as a way to reduce water usage.   Initiatives like this will improve resilience to certain ecological conditions (e.g. drought), and as such, it is critical for Planters to encourage this among its own production partners (as an added bonus, this type of corporate sustainability is likely to boost Planters brand perception).  Planters’ significant buying power in the US means that it has the opportunity to push growers toward more resilient growing practices even before they are willing to do so themselves.  Strategies like precision agriculture, GMO technology, or other approaches to improve plant resilience (e.g., through techniques pioneered by companies like Indigo Agriculture) are ways that producers can prepare for the impact of climate change.  Planters can play a role here by giving preference to producers that use these techniques, or by using their convening power to promote the importance of these practices more generally.

In the medium to longer term, Planters should forecast the areas of the world where peanut production will either be A) less affected by climate change or B) improved by climate change (e.g., regions further to the north).  It may be worth investing in grower relationships in these locations even before they are at scale, with an eye towards a future where the geography of peanut production is different.

One final recommendation for the company is to factor in this long-term view of climate change impact into its product decisions.  Pistachios and almonds are two of the crops that may be hardest hit by climate change, so given this perspective Planters’ current concentration in peanut products may be particularly prescient [8].

One important question for Planters to answer is whether the pace of climate change merits significant investment today, or if investors will reject such a long-term bet.  The second question that must be answered is whether there are further responses Planters could implement as a player in the middle of the peanut supply chain.  While its purchasing power gives it some sway, to some extent, the company may be at the mercy of growers and the larger ecological environment.  Are there creative approaches they could borrow from other industries to influence players further up the supply chain?