KPN is the incumbent player in the Dutch telecommunications industry, offering four key products: fixed telephony, mobile telephony, TV, and internet. Given that it owns the physical network that made the introduction of the internet into the homes of millions of people in the Netherlands possible, it surely is a company that unequivocally benefits from the digitalization trend. Right? Not so fast.

The introduction of the internet

Initially, the commercialization of the internet in the 1990s opened up a significant new product line for KPN, by allowing the company to offer Internet services over the same copper wire it used to provide households with fixed telephony1. In fact, the internet allowed KPN to become a serious competitor to cable TV players in the TV market in the mid-2000s, through offering TV services over the internet (IPTV) – a market it had not been able to meaningfully penetrate until then2. The introduction of the internet and the subsequent ability to offer a competitive TV product enabled KPN to alter its business model and bundle TV services with internet and fixed telephony (called triple play, or 3P)3, which boosted KPN’s performance in a number of ways. A 3P bundle, often priced lower than the sum of the individual packages, incentivized customers to consume all their telecommunication services through KPN, and thus allowed KPN to upsell4. This in turn increased KPN’s share of wallet and increased customer stickiness (i.e. reduced churn) because of increased switching costs5.

In the meantime however, cable players were also able develop internet and fixed telephony services and thus to offer a more than competitive triple play package6. In fact, while the limits of internet speed using a copper cable seemed to have been reached, cable technology allows for a much higher theoretical internet speed7. For example, KPN’s fastest copper-wire internet speed package today offer 60 Mbit/s download speed8, whereas the main cable player in the Netherlands offers 300 Mbit/s9. This necessitated KPN to roll out a network based on a new technology, glass fiber, with the potential for much higher internet speeds – resulting in huge capital expenditures to keep up with competition10.

Not only was KPN forced to invest substantially in its network, it also was not able to capture much of the value this offered to “free riders” that rely on the internet infrastructure, but do not pay for it. To make matters worse, these players do not only free-ride on KPN’s infrastructure, but are also eroding its revenues. The rise of Netflix for instance has led some consumers to cancel their TV subscription all together11. Internet telephony services such as Skype eroded fixed and mobile telephony revenues, whereas Whatsapp is largely responsible for the demise of SMS revenues12.

These market trends led to some tough financial years for KPN (see figure 1). 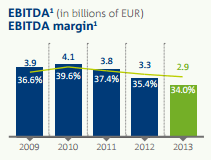 In an attempt to stay relevant, KPN has chosen a strategy to work together with disruptors rather than fight them, and adopt a reseller business model. For example, it has integrated the Netflix app into its digital TV menu providing direct access through its interface14. Similarly, KPN has included Spotify with its most premium triple play package through a revenue sharing agreement15. It has taken its reseller business model even one step further by reselling home security & automation systems16.

Given that the internet provides the majority of the value consumers derive from the current 3P bundle, KPN should consider reorganizing its product offering mainly around the internet product to better monetize this valuable asset. For instance, bundles can be distinguished around quality of service, such as latency, speed, security, and performance guarantees – all becoming increasingly important given the rising number of devices connected to the internet and their corresponding applications.

In order to be able to cater to this anticipated increase in demand, KPN should also double down on expanding its glass fiber network. It has recently slowed down the roll out, but if it wants to be able to keep up with competition that already offers internet speeds five times KPN’s copper wire network offers, it needs to have a future-proof network.

Lastly, I believe that KPN needs to take a more proactive role in designing Internet of Things solutions. Instead of waiting for the next disruptive product to erode revenues, KPN should proactively participate in designing the future and utilize its core product that makes those innovations possible: the internet.

7Columbia Telecommunications Corporation, 2014. “The State of the Art and Evolution of Cable Television and Broadband Technology”, CTC: Kensington, MD, USA.

Is too much Digital possible? Rise and decline of Gilt Groupe.

Turning the public into ‘citizen epidemiologists’

Student comments on KPN: The interesting case of an Internet Service Provider