For much of the 90s and 2000s, Nike consistently achieved double digit growth. In 1997, it achieved 42% growth but tapered to a still respectable 14% by 2008[1] by combining extensive and effective product marketing with a rapid expansion plan across emerging markets.

This aggressive strategy combined with a keen focus on reducing costs, however, caused labor relations problems for the shoe manufacturer. Throughout the 90s, the company was scrutinized for its overseas labor practices. Activists brought forth a host of issues on Nike’s contracted factories; illegal pay practices, employee abuse, and dangerous working conditions.[2] By 1998, CEO Phil Knight was forced to acknowledged that “the Nike product has become synonymous with slave wages, forced overtime, and arbitrary abuse.[3]

This led the company to rethink their operating model across their entire supply chain. It started by working on its Code of Conduct, making sure that the behaviors that resulted to these labor problems are not incentivized. Nike also started to think about their design process and how it affected different aspects of their supply chain. VP of Corporate Responsibility Hannah Jones emphasized the importance of “designing for the future… as opposed to retrofitting for the past.”[4] She believed that design was an important piece of the change in process with one analyst noting that the company would “rather than monitor the use of facial masks by overseas workers handling toxic chemicals, Nike is teaching itself to design shoes that don’t use them.”[5]

This gave birth to initiatives such as the Considered Design Philosophy, which pushed shoe and apparel desig 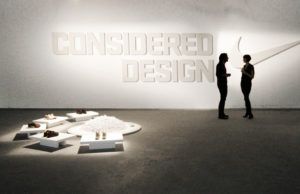 ners to think of ways to minimize environmental impact in the entire product lifecycle. This also lead to “lean” manufacturing models, that reduced slowdowns and wastage. In the early 2000s, Jones introduced the Sustainable Innovation initiative and advocated for it throughout the company.

Soon after, stakeholders and analysts saw the benefits of these initiatives to the company’s bottom line and brand competitiveness.[6]  By turning its labor relations woes to successes in the field of sustainability, pundits declared Nike have gone “from Villain to Hero”.[7] In recent years, Nike successfully established itself as a brand dedicated to sustainability.

From then on the company reaped the benefits of its efforts in sustainability. By the late 2000s, Nike had developed the Flyknit shoe design that lowered wastage (the shoe used about 95% of materials procured). Adding a performance element to its marketing helped boost sales and improve margins.[8] Nike also used sustainability as an important core competence and marketing tool against other shoe manufacturers. (See Figure 1).

In the recent World Economic Forum in Switzerland, Nike aired out concerns on how climate change can affect its operations. It emphasized the threat of flooding to supply chains in low-lying areas. They also stressed the need for water conservation as the company faced water shortage issues in certain regions.[9] According to researchers, water shortage is the biggest challenge that apparel makers face. More than 20% of the world’s commercial products are produced in water-scarce areas.[10] Clearly, the company is still vulnerable to the threats of Climate Change.

To address these challenges, the company has started to think heavily about the location and technology of its new investments. It has recently opened a waterless dye factory and is considering partnerships to minimize water usage.[11]

The company has also set up ambitious environmental goals as it aims to further reduce its environmental impact. Some notable goals are its aim to reduce its factory count by 24% even with double digit growth targets and to obtain 100% of its energy requirements from renewable sources by 2025.[12] 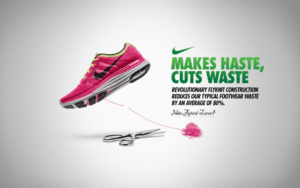 At this point, the company needs to use its newfound status as a sustainability champion, not only to further market its products, but also as leverage to pressure governments and corporations to act on climate change. The company also needs to work on more partnerships with academic institutions and NGOs to further harp on its idea of Sustainable Innovation. Nike must step up its work with the leading material scientists and engineers to further develop its designs to make it as least wasteful on resources as possible. There is also the opportunity to motivate end consumers on the importance of Sustainability. The company must secure its foothold as the leading company in sustainable apparel with the intention of not only securing its future market share, but to also educating the end-consumer of the importance of sustainable products.

From minimizing environmental impact through product design to marrying innovation with sustainability, Nike has proven to governments and businesses alike that sustainability done right, can help to achieve growth and profit targets. The question now is, can the company use this newfound status to convince others to walk the sustainability talk and Just Do It?

[3] Richard M. Locke, “The Promise and Perils of Globalization: The Case of Nike,” in Thomas A. Kochan and Richard L. Schmalensee, ed., Management: Inventing and Delivering Its Future (MIT Press, Cambridge MA, 2003).

Student comments on Just Did It: How Nike Found the Idea of Sustainable Innovation.. and Ran With It.