John Lewis is not like any other traditional bricks and mortar retailer you know. The 150 years old company, owned by its 90,000 employees, managed to successfully transform itself over the years to keep up with constantly changing market trends and retail preferences.[1] With excellence in customer service and satisfaction at the core of what the company represents, John Lewis has been a market leader taking big technology bets to stay ahead of the curve.

In 2011, John Lewis made a strategic decision to redesign its customer experience using technology. The first step was to hire a new IT director to lead the change. British Airways Ex-CIO, Paul Coby, joined and started an omni-channel overhaul[2]. Paul decided that the only way to keep the historic level of customer excellence and to move the company forward, each channel (brick-and-mortar, call center, online, mobile) has to act in synergy. Until then each channel was developed as an isolated end-to-end provision. The retailer had a long way to go. The electronic point of sale system (EPoS) has not been refreshed since 1990 and the supply chain and ordering system did not allow for tracking products and orders across channels. With 60% of John Lewis customers buying both online and offline[3], the company had to adapt.

What did John Lewis do to create a seamless customer experience?

Three strategic business objectives were set: Track, Know and Manage. The idea was to be able to track every item from factory to warehouse to customer and back again, if an item was returned. The objective was not only to understand what customers are buying, but to forecast demand based on what might they buy in the future via any of the channels.

In order to execute on the strategy, the company set up a new EPoS system, implemented a new web platform and a new order management system that had the ability to track orders cross-channels. It also replaced its single channel supply chain system with a new cross platform. As a result of those changes, in 2009 John Lewis pioneered click-and-collect purchasing option, now an industry standard. 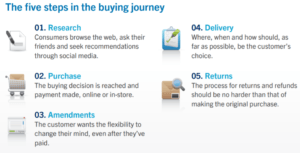 The change was not easy. Firstly, it required large upfront investment (GBP 40m[4]) and maintenance spending. Since the beginning of the IT revamp, sales grew at double digits[5], but profits declined. The first half of 2016 profits were down 31.2% from prior year, and the retailer pins more than half of the decline too transitioning costs in its distribution network.[6] The management is however optimistic about the future, stating that new systems will eventually pay for itself and help the company grow.[7] We are yet to find out if it is true. However, the biggest challenge was the cultural shift needed for full technological integration. Employees had to get used to the new systems and the IT operations team had to learn to support bigger and ever growing estate.

After the initial omni-channel integration John Lewis has been experimenting with various new ideas. In 2012, it tested a virtual mirror pilot in its flagship store at Oxford Street. Customers could “try on” outfits simply by standing in front of a screen displaying them wearing the virtual garments. Shoppers could then have details mailed to them.[8] In 2014, it launched JLAB – a tech incubator venture aimed at finding and funding five innovative retail start-ups.[9] The program just run for the third year. The retailer also experimented with a full omni-channel physical store in Exeter, where customer could use 3D cameras, QR codes and e-paper price tickets during their brick and mortar shopping experience.[10]

Despite the investments John Lewis still has a long way to go. Where it gained market edge by benefiting from the first mover advantage, it lost it to other large UK retailers that were quick to catch up and in some cases exceed John Lewis’s efforts. For example, Selfridges also implemented the click-and-collect system, but it exceeded John Lewis by focusing on creating distinctive and elegant gift-box like delivery packaging, ensuring minimal cost while compensating customers for the lack of physical store shopping experience.[11] In addition, being the market innovator, John Lewis took a lot of high risk bets (e.g. the virtual mirror), which did not pay off financially (although it did create media buzz). Going forward, and giving the declining profits, the retailer should focus on more targeted IT and digital spending. Finally, unlike the competition, John Lewis should work on its customer loyalty programs. Right now, from a customer standpoint, there is no incentive to choose John Lewis over some its competitors – the other luxury retailers or Amazon.

Fidelity vs. the Robots: The War for Millennials

Student comments on John Lewis: the omni-channel integration leader in the UK