After a $225 million Series A in July and a $350 million Series B (with an additional $150 million in verbal commitments) this November, Jet.Com is poised to continue to its challenge to Amazon. With strong investor endorsement, Jet just fundamentally shifted its value proposition. At this point, investors appear to be betting more on a lucrative exit than on the long-term prospects of a business model that is reliant entirely on an efficient operating model out-competing Amazon.

Founded by CEO Marc Lore, (who started diapers.com in 2005, which was sold to Amazon for $500 million in 2013 ), Jet seeks to tweak the e-commerce paradigm. Originally, Jet combined the membership model of Costco with free shipping. Customers paid an annual $50 fee and then were able to buy products at (or near) cost with 30 day returns. Jet’s revenue came primarily from the annual fee which allowed Jet to offer products at cost. By limiting product variety to the most popular ~10 million SKUs (Amazon sells roughly 200 million), Jet could limit warehousing costs. Jet also launched the Smart Cart, which offered discounts in real-time for products in the same distribution center (and recommended additional potential matches).

In October, Jet announced an abrupt business model shift. Eliminating the membership fee, Jet cited larger than expected order size, restricting free shipping to orders of at least $35. Jet also launched the Jet Anywhere program, which refers customers to other brands and offers “Jet Cash” (discount on future Jet purchases) if a purchase is made and reported back to Jet. As part of this retail partnership, Jet sells a subset of branded products through its main website and will purchase directly from the retailer in the event of stock-outs.

Jet’s business model requires scale to take advantage of tangible operating efficiency. To develop a loyal customer base, Jet has prioritized customer retention and lower cost distribution. Both the new and old business models are carefully tailored to drive customer retention. By promoting Jet Anywhere, retailers can enter a symbiotic relationship, gaining customer traffic in exchange for their business. Jet, meanwhile, offers a future discount through Jet Cash and learns which additional products the company may want to stock. Where the old model focused on retention through locking in a membership fee, the new model passes on bulk discounts without an up-front commitment.

Jet encourages more distribution-friendly purchases. By limiting product offerings, Jet should be able to reduce its overall carrying costs and increase inventory turnover while maintaining some negotiation leverage. The Smart Cart further reduces shipping costs by prompting customers to purchase items that can be combined into a single shipment. While generally effective, Jet’s algorithm requires additional refinement (see attached image where the same product was priced differently). Overall, their transparent commitment to passing on savings has attracted initial interest, but taking on such an entrenched incumbent will require rapid growth. 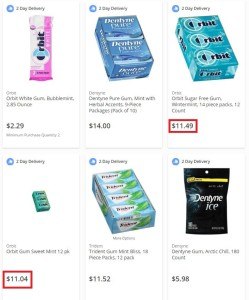 With annualized revenue between $400-500 million and market spend alone exceeding $300 million, Jet has a long way to grow. Walmart.com ($13 billion in revenue) and Amazon ($90 billion) are overwhelmingly large and have squeezed discounts out of retailers. It is hard to believe that Jet could sustain material operating advantage over the long term. However, Lore recently suggested that customers have proven more sensitive to the presence of a discount that its size, suggesting that smaller discounts of 4-5% with no up-front membership commitment will be more effective than ~10% overall discounts. If this proves true, Jet could quickly become an acquisition target, even if it never reaches Amazon’s size.

Ultimately, Lore has set a target of $20 billion in revenue to fully realize scale benefits. At its current size, Jet has suggested that some savings could be realized, but out-scaling Amazon and Walmart is a tall order. Jet is approaching profitability, but predictions of “killing” Amazon are a long way off.

Chipotle and the Fast Casual Revolution