Red Lobster is already feeling the heat (literally). Oceans are one of the most vulnerable ecosystems to climate change [1]. As the Earth’s atmosphere becomes more polluted with carbon dioxide, they also absorb more of this gas, making the water more acidic. This decrease in pH makes it more difficult for crustaceans, such as lobsters and crabs, to build exoskeletons to protect themselves [2].

But it’s not just the lobsters that are suffering. Some fish species are also less resilient to climate change [3]. Changes in sea temperature impact the metabolism, reproduction, predator/prey balances and susceptibility to toxins of many aquatic species [4]. These changes have tangible impacts on the filet that reaches your plate, as fish size may decrease by up to 30 percent [5]. Exhibit 1 shows how increasing acidity interacts with higher temperatures and changing currents to change the distribution, number, quality and size of fish species. 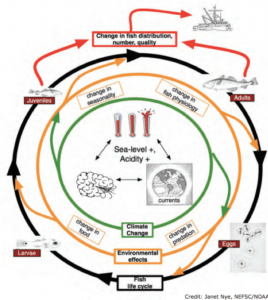 Exhibit 1: Wind, currents, and acidity caused by climate change cause shifts in the geographic distribution of fish populations (University of New Hampshire, Source 6)

Red Lobster cannot put off addressing this problem. As early as 2008 the fishing industry began to feel the impact of global warming [7]. Many of the most vulnerable species are the most popular for consumption such as pink salmon, Pacific bonito and spotted grouper [8]. Decreasing populations of these fish and crustaceans, combined with a reduction in their size, makes them more expensive for organizations such as Red Lobster to source. This puts Red Lobster in a particularly difficult position because an integral part of its customer promise is maintaining low, consistent prices.

The company has already been taking some measures to ensure that their business remains scale-able.

But they can be doing more to ensure that they don’t flounder.

Because of its scale, Red Lobster is uniquely positioned to ensure that their fish suppliers are doing all that they can to make the fishing industry sustainable in spite of increasing pressure from climate change. There are a number of initiatives that Red Lobster can pursue.

Moving forward, it seems like Red Lobster will likely grow their reliance on farmed fish. But if the restaurant industry as a whole makes this shift, will this reduce the attention paid to the wild-caught industry, resulting in less investment into sustaining these fledgling species? As fish and crustacean populations begin to dwindle, how feasible is a business model that relies on delivering seafood at a low cost?

Don’t mess with Dallas: How the city of Dallas is tackling climate change