Loan applications, credit card inquiries, and even apartment rental requests all essentially hinge on one thing: a credit score. Traditionally, institutions have asserted that an individual’s financial history (primarily payment history, current debt profile, and length of credit history) informs future behavior and therefore should dictate the decision to offer credit to potential borrowers and at what rate. This framework makes sense when the necessary information is available, but what about when it is not?

Unfortunately, in low-income countries it is often the case that no such financial history exists. In recent years many politicians and executives have expressed the need to empower the emerging middle class, reduce poverty, and foster opportunities for a better life.1 However, platforms are not in place to aid this development financially. Given the lack of payment history and even financial accounts within this population, banks do not have enough information on which to base credit scores. As a result, taking out a loan is virtually impossible.2

Co-founders Jeff Stewart and Richard Eldridge took note that with repayment rates in microfinance as high as 98% in some regions, a huge opportunity existed to serve the under- and un-banked middle class in emerging markets who lack access to credit.3 What they realized is that even though much of this population does not have an established financial history, they do have an online presence though social media and data surrounding smart phone usage.4

It is a historical and widely accepted belief that a person’s character is just as important as income or assets in making a lending decision. Current trends including the widespread reach and use of social media combined with the penetration of smart phones opened the door for Lenddo to answer the question: can you use someone’s social media presence and mobile phone data to assess trustworthiness, and therefore creditworthiness?

Lenddo developed an algorithm that aggregates data from social media accounts – friends, frequency of interaction, interests, etc. – and other smartphone applications – messaging and browser history, apps, wifi network use, battery levels, etc. – to establish a rating that signals an individual’s likelihood of repaying or defaulting on loans.5,6 This “LenddoScore” is a number ranging from 0 to 1,000, and is said to be a measure of trustworthiness, enabling lending via social networking alone instead of age-old credit score metrics.7 The algorithm has been developed and is maintained by mapping relationships between more than 120 social media profiles on Facebook, Email, LinkedIn, Twitter, and Yahoo.8 Additionally, Lenddo also asks members to select a “Trusted Network” of at least three people. If the borrower fails to pay back the loan, Lenddo scores of their network will also suffer. This additional layer incentivizes friends and family to keep the borrower accountable, as a lower score could affect the chances of being approved for a loan in the future.4 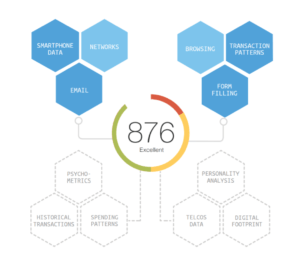 In the Philippines and Colombia, Lenddo began by granting loans using its own capital, and the results were extremely positive. Default rates were better than the microfinance industry average, confirming the belief that the digital footprint of potential borrowers offers better evidence of loan repayment than a traditional credit score for people just entering the middle class.7,9 In fact, when comparing the Gini Coefficient (assesses the ability of a credit score to predict loan repayments/defaults) in the Philippines, the traditional credit score coefficient ranged from 0.25 – 0.32 whereas the LenddoScore coefficient ranged from 0.32 – 0.39, meaning it had higher predictive power.8

But Lenddo did not stop there. Playing in the lending game was never the end goal. In fact, Lenddo transferred its loan portfolio to a third party and is now focusing on selling its algorithm as a service to financial institutions as an alternative or complementary means to assess credit worthiness.5 Through Lenddo’s cloud-based application programming interface, a financial institution can add code to their lending application allowing customers to opt in and share their social media accounts.3 Lenddo’s goal is to help one billion people get access to financial services by 2020.6 Since launching, Lenddo’s alternative credit scores and online verification services are used in more than 15 countries and the company helps to process tens of thousands of loan applications every month.10

The world beyond loans

What is next for Lenddo? Despite what its name suggests, applications of its algorithm are much more widespread than just loan approvals. Examples of the next generation of uses include:

In a world of increasing online interactions and digital information flow, the opportunities for Lenddo’s service are seemingly endless.

Government Innovation: Not an Oxymoron?

Student comments on It’s all about who you know: Lenddo makes credit decisions based on your social network